Intersectional Feminism: What It Is And Why We Need It For A Truly Gender Equal World
Odyssey
CurrentlySwoonLifestyleHealth & WellnessStudent LifeContent InspirationEntertainmentPolitics and ActivismSportsAdulting
About usAdvertiseTermsPrivacyDMCAContact us
® 2023 ODYSSEY
Welcome back
Sign in to comment to your favorite stories, participate in your community and interact with your friends
or
LOG IN WITH FACEBOOK
No account? Create one
Start writing a post
Politics and Activism

Intersectional Feminism: What It Is And Why We Need It For A Truly Gender Equal World

Trust me, it's not as daunting as it sounds. 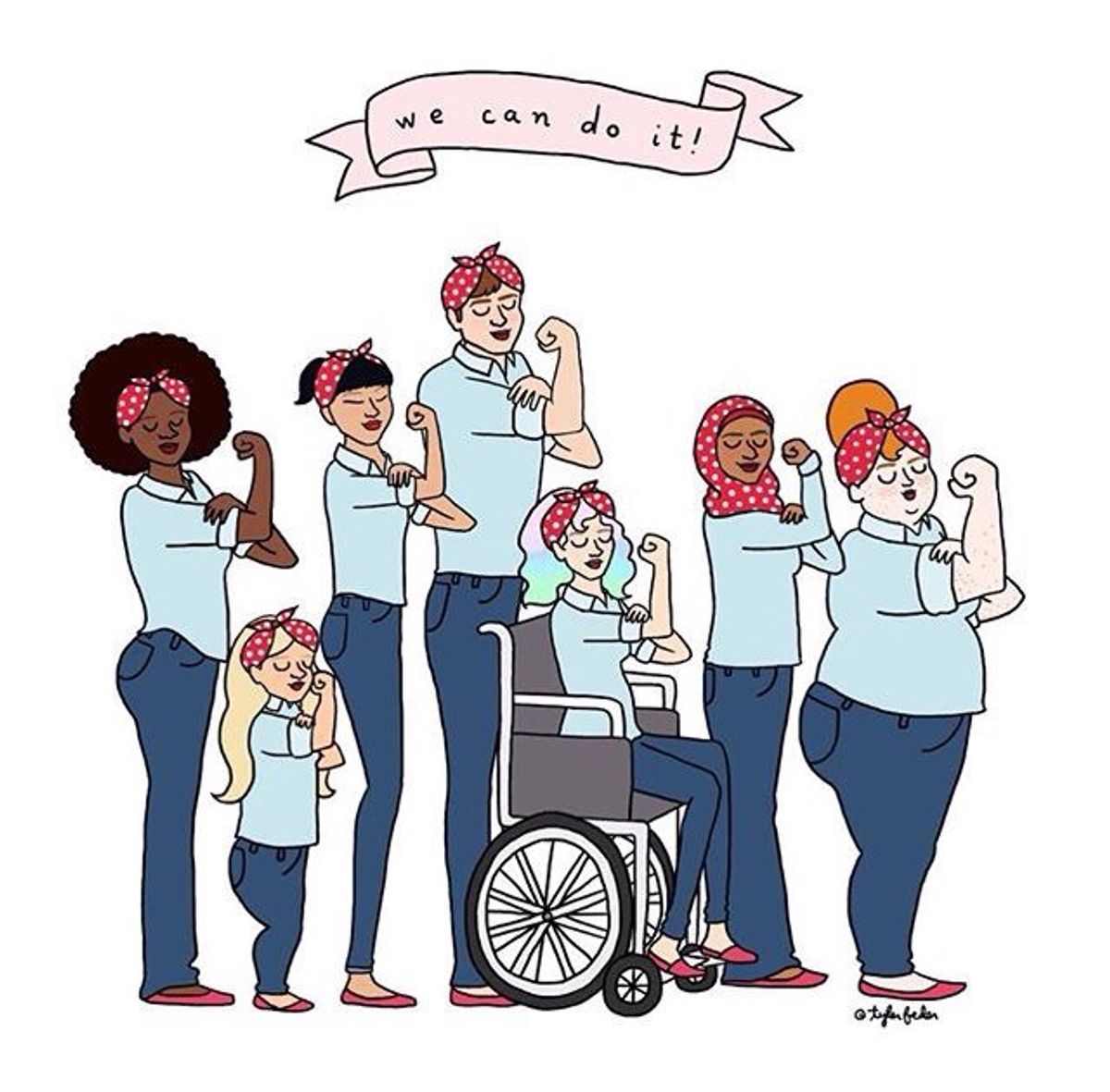 Most know that feminism is the movement set on achieving gender equality. But not as many know what intersectional feminism is. So what is it, exactly? The term intersectionality was coined by civil rights activist and professor Kimberlé Crenshaw and can be defined as "the interconnected nature of social categorizations such as race, class, and gender as they apply to a given individual or group, regarded as creating overlapping and interdependent systems of discrimination or disadvantage." By adding the idea of intersectionality to feminism, the movement becomes truly inclusive, and allows women of all races, economic standings, religions, identities and orientations for their voices to be heard.

Over the course of its existence, feminism has mainly focused on the issues experienced by white, middle-class women. For example, it is largely shared and advertised that a woman makes 78 cents to a man's dollar. But this is only the statistic for white women. As upsetting as it is, women of minority groups make even less. Black women earn 64 cents to white men's dollar and Hispanic women only earn 56 cents. Intersectional feminism takes into account the many different ways each woman experiences discrimination. "White feminism" is a term that is used to describe a type of feminism that overshadows the struggles women of color, LGBTQ women and women of other minority groups face. So, essentially, it's not true feminism at all. As explained in this video, "white feminism" ignores intersectionality and neglects to recognize the discriminations experienced by women who are not white. It's important to note that not all feminists who are white practice "white feminism". "White feminism" depicts the way white women face gender inequality as the way all women experience gender inequality, which just isn't correct. Unfortunately, celebrities and the media is often guilty of doing this as well. An example of this is the great Nicki Minaj and Taylor Swift debacle of 2015. As Nicki tweeted her disappointment of not being nominated for Video of The Year, she brought to light a very important issue. She pointed out that most music videos nominated only showed white, slender-bodied women. Taylor took this as a personal dig and sent out the now infamous tweet in response. Instead of using her voice to recognize the prevalent problem Nicki was discussing, Taylor became defensive and claimed Nicki was pitting women against women. Eventually, the "feud" came to an end when Nicki had Taylor join her onstage for her performance. But, this exchange can still serve as a reminder of how important intersectionality really is.

The key to combating "white feminism" is education about intersectionality. In an interview, Crenshaw defines intersectionality as, "The idea that we experience life, sometimes discrimination, sometimes benefits, based on a number of identities." She first started to develop her theory on intersectionality when she studied the ways black women are discriminated against for both their gender and race. She comments, "The basic term came out of a case where I was looking at black women who were being discriminated against, not just as black people and not just as women, but as black women. So, intersectionality was basically just a metaphor to say they are facing race discrimination from one direction. They have gender discrimination from another direction, and they're colliding in their lives in ways we really don't anticipate and understand." The fight for gender equality is a group effort, so all of us who are striving for a gender equal world must take intersectionality into account to discuss and understand each of our own unique standpoints and situations in order for feminism to prosper.

So, now that we understand what intersectionality is, how can we incorporate it into our feminism? As explained by Laci Green and Franchesca Ramsey, two awesome Internet ladies, in this video, there can be three easy steps in achieving intersectional feminism. They explain the steps as, "1. Examine our own privilege. 2. Listen to each other. 3. Practice feminism through a broader, more inclusive lens." It's crucial to check your own privilege in society in order to be a better feminist. I, for example, am a white, straight, able-bodied, middle-class woman. This means that I personally don't have to face challenges that other women do. So, it's important that I recognize my privilege and listen to women who experience the world differently than I do. As Laci says in the video, "On the feminist issues where we hold privilege, it's crucial to listen to women who don't. To listen to their experiences, to see the world through a more complex lens and to raise the voices of those who have less power." Franchesca adds, "You can't exactly walk the walk if you have no idea where the walk even goes." Despite how daunting and intimidating the term intersectionality may seem, it's just about us standing up and looking out for each other.

At the end of the day, we might all experience discrimination and gender inequality differently and uniquely, but we are all united in our hope for equality.