Herobust On the Road For WTF Tour

On the second leg of his WTF Tour, music producer Herobust talks about how he started producing, living the tour life, and his upcoming EP. 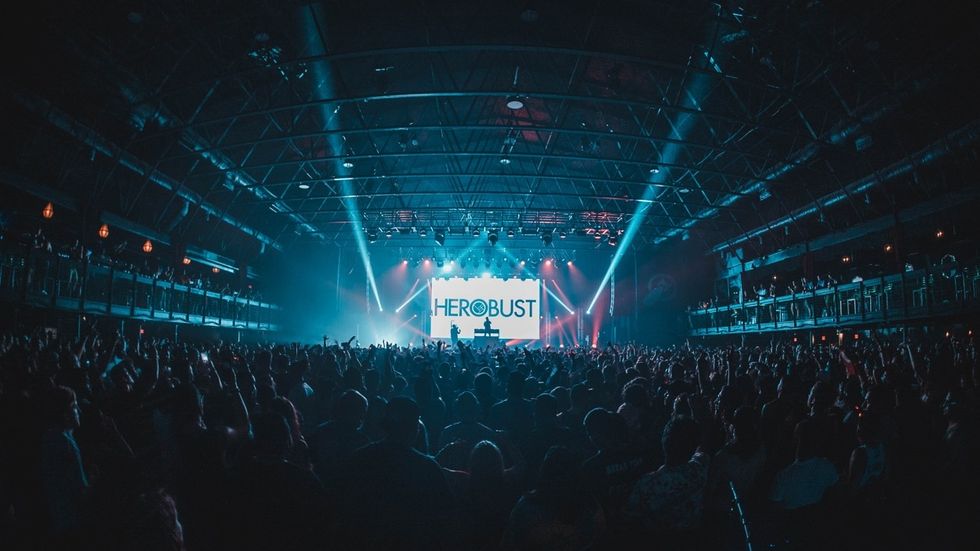 On December 22nd, the Agora Theater and Ballroom in Cleveland held their annual EDM rave event known as Winter Warmup, which featured DJ and bass music producer Hayden Kramer (among many others), better known by his stage name as Herobust. I, being based in the area, was given the opportunity to speak with Herobust about a number of topics from why he chose the name Herobust to future projects. After some navigating around the backstage, hardly able to hear my heeled footsteps from the bass blasting on stage, I met a chilled out Herobust in a green room chatting with fellow feature and music producer Freddy Todd.

When I managed to find a lull in their conversation, I asked Herobust if this was his first time at the Agora Theater or the city of Cleveland, and he answered in between laughs.

"I play everywhere. I play two or three times a night in different cities, so it's hard to remember all of them."

It made sense. His venue history spans from local gigs to massive music festivals including Lollapalooza, EDC Vegas, Electric Zoo and Lost Lands. His most popular track "Skurt Reynolds" amasses over 5 million listens on Spotify currently, allowing him to catch the attention of some notable artists in the electronic music industry, such as Diplo, Skrillex, and Marshmello.

His latest work compromises of a remix package for his latest track "WTF" which stars eight different reworks from different DJs and producers, nine if you include the remix by Herobust himself. Since then he announced a two part WTF Tour, with the first leg spanning through the summer and the second leg on phase 2 of his WTF Tour that ends in February.

Before talking about the tour and the accomplishments and the music, I wanted to know more behind the name, Herobust. Sure, it compounds two legitimate terms, but mashed together it sounds like nonsense. That, Herobust tells me, was the goal.

"All I cared about at the time was that it wasn't a real word, where someone could judge me and make judgements before they hear the music."

From a name so abstract, Herobust could lend itself to different kinds of imagery, and it would never be wrong, he says.

The producer began in dive into the music world by creating rap beats in Georgia for locals, mentioning being surround by rap music in his hometown of Atlanta, a city that has birthed many popular rap and R&B artists including Usher, Ludacris, Andre 3000, and Donald Glover (Childish Gambino), to name a few.

"Just gradually I started to hear electronica producers," he tells me, "not producing rap music, but they kind of showed me there's a lot more creativity to be had in producing other types of music."

"I fall more into EDM trap and rap music, and I feel, like, what I do is take influence from outside electronic music, and I kind of show it to the people of EDM. "You know what I mean? Like, I'm not like 'Woah, this dubstep producer inspires me to make dubstep."

Before our conversation, I learned that his work in the EDM music scene has earned him the title "Trap Caesar" within the community, presumably from his past EPs "I'm Aloud" and "Vertebreaker" with the former fusing trap and bass and the latter fusing house and bass. Herobust wants his music to be multifaceted, showcasing the potential creativity that lies by mixing two genres from separate music circles.

Nowhere can this be better expressed than by performing those influenced tracks on tour. Currently, Herobust is travelling for the second leg of the WTF Tour, making a stop in Cleveland along the way.

"A lot of this tour has been abroad, so getting to see other cultures and stuff is really cool." He says.

"But still, even when I'm not, you know, on tour, like at a national show sometimes you just get a show, be it big or small where, there's just, like, a connection that happens between, like, it may not even be between me, cause you see other people connecting with each other, and some shows you can tell they were like... I don't know, I don't know. But whenever a show has that vibe, that family vibe, that's—no matter what country or what language they speak—that's what you're going for."

To maintain that vibe, the vibe at his shows that gives people a chance to bond at his show, Herobust intentionally revealed very little about his upcoming EP "Not Your Average," expected to drop later this year.

"It's gonna be very Herobust but it's also gonna be very surprising at the same time. They're gonna know it's me from the way it sounds but I would rather them listen to it."

Herobust places emphasis on the experience. He wants EDM listeners to experience what EDM and rap music sound like together. He wants to watch fans connect over the experience they share at one of his shows. I could go on about his end goal in his music, but I think Herobust himself expresses it best.

"I just want people to experience."

You can check out Herobust and his music by visiting his website or listening on Spotify and Soundcloud.

Related Articles Around the Web
herobust
Report this Content
This article has not been reviewed by Odyssey HQ and solely reflects the ideas and opinions of the creator.