Why I Am Happy That I Registered To Vote
Odyssey
CurrentlySwoonLifestyleHealth & WellnessStudent LifeContent InspirationEntertainmentPolitics and ActivismSportsAdulting
About usAdvertiseTermsPrivacyDMCAContact us
® 2023 ODYSSEY
Welcome back
Sign in to comment to your favorite stories, participate in your community and interact with your friends
or
LOG IN WITH FACEBOOK
No account? Create one
Start writing a post
Politics

Why I Am Happy That I Registered To Vote

This election could not suck more, but now I have the power to make it suck less. 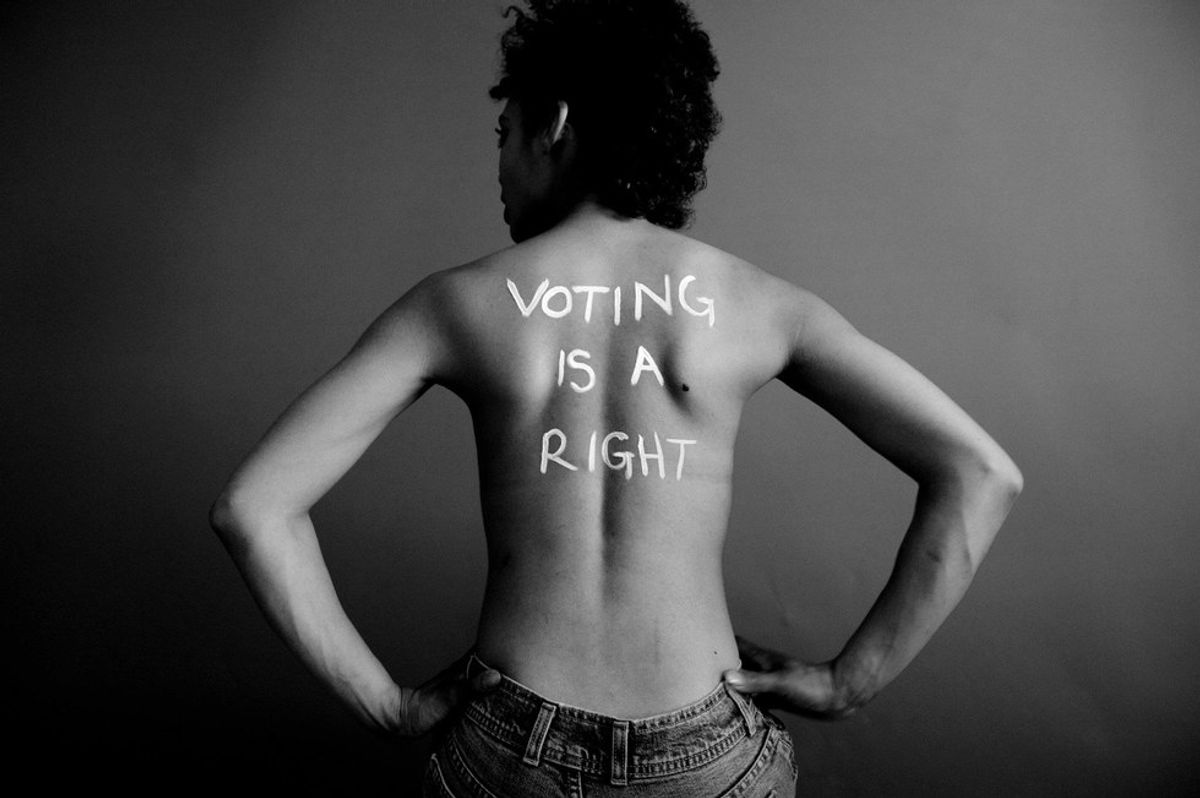 I grew up only remembering two presidents who served two times. I remember going to one of the local schools with my dad, on a random November holiday, following him to a booth, and looking up at him as he did something with a piece of paper. He told me he was voting, I asked who he was voting for, and he said that he didn't have to tell me.

During those elections, I also remembered watching the news of people supporting one candidate over the other, an "R" or "D" in parentheses next to that supporter's name, and I definitely remember very mean commercials from one candidate to another. I even watched my parents take sides, and of course, that influenced me.

I always thought that I knew who I would vote for — usually I knew because my parents knew, or I would get confused if they knew they wanted different candidates in office. I just looked at politics. I didn't actually pay attention.

When Barack Obama won his first election, and my sixth grade class watched him get inaugurated, my teacher said we made history. I just saw a different President who wasn't Bush. I didn't know how powerful being voted in was.

Then I went on to learn more about government in high school, and watched an election as a sophomore. I took a test for my government and politics class, and it had come to the conclusion that I was a right-leaning moderate ...That confused me. I wanted President Obama to win again, but I was a republican? Clearly, I really only learned about the political side I inhabited and not the moral side I stood on. As I was made to pay attention to ads and news, I started to see stereotypes of political stances, not seeing any overlap of views.

Here I was, tests saying I was republican ... but I believed in the right to choose and other socially liberal topics. So if I registered to vote as a republican, did that mean I had to share the same ideologies? Also even though I was socially liberal, the democrats didn't look that smart either, and I didn't want to register with a party I didn't politically agree with.

As I learned more about political ideologies, I realized something.

I hated politicians. Really, I did. I watched men and women so obsessed with getting reelected that I didn't know what they would actually do if they had the chance to be in power again.

Despite me being old enough to vote, I didn't want to vote for the presidency of 2016. I really didn't. I wasn't really into fighting with people on every ideal I had.

However, my mind was changed when I moved back home the summer after freshmen year. My parents had two things on my agenda for my break: change banks and register to vote. When two months went by and they reminded me to register, I just didn't care. What good could come out of my one little vote when there are other people, higher up people, voting for me? Also, still, I didn't want to defend myself over a decision I made.

Until this week, I had no idea how powerful voting could be. My mother dragged me out of bed, we switched banks (finally), and we ventured to town hall, so I could register.

We were the only ones in the office, being helped by a sweet older lady who gave me my form and explained how to fill it out. Despite wishing to check off the box next to Republican, I stuck to being independent. I had my views going both ways, and in a world of deepening stereotypes, I had no wish to be pigeon holed with only certain ideals.

When I handed the women my form, she ... congratulated me, explaining how she wished she could see more young people come in and do what I just did. My mother and her started having a conversation about how when they were young and just thought of as a wife meant to make babies. The woman told me that when she was younger, she was asking about a big vote coming up ... a man laughed and explained that her husband would vote for her. She apparently almost attacked him.

How stupid I was ... I took voting for granted ... I took it as a privilege. Many years ago, I would be praying for this right, and there were women who fought and gave me this right. It was a right to vote. It is an honor to vote even in a crazy election like this one.

In my lifetime, I have seen a black man earn the presidency after others fought for his right to run. And I now see a woman with the Democratic seat ... something that wasn't possible - and no this is not me saying I am voting for Hilary. My father was right — I don't need to tell you who I voted for and hope you understand. I am not changing your views. And you are not changing mine. But while you are not registered, yelling at me at how your candidate will win, what are you doing about it? I am staying quiet, with the right to help my candidate win. I have voice now that can make waves, while others are just splashing their arms. Who's doing more for their future?

I would like to say thank you to all the women who have allowed me the peace and security of having the power to change the world, one ballot at a time.