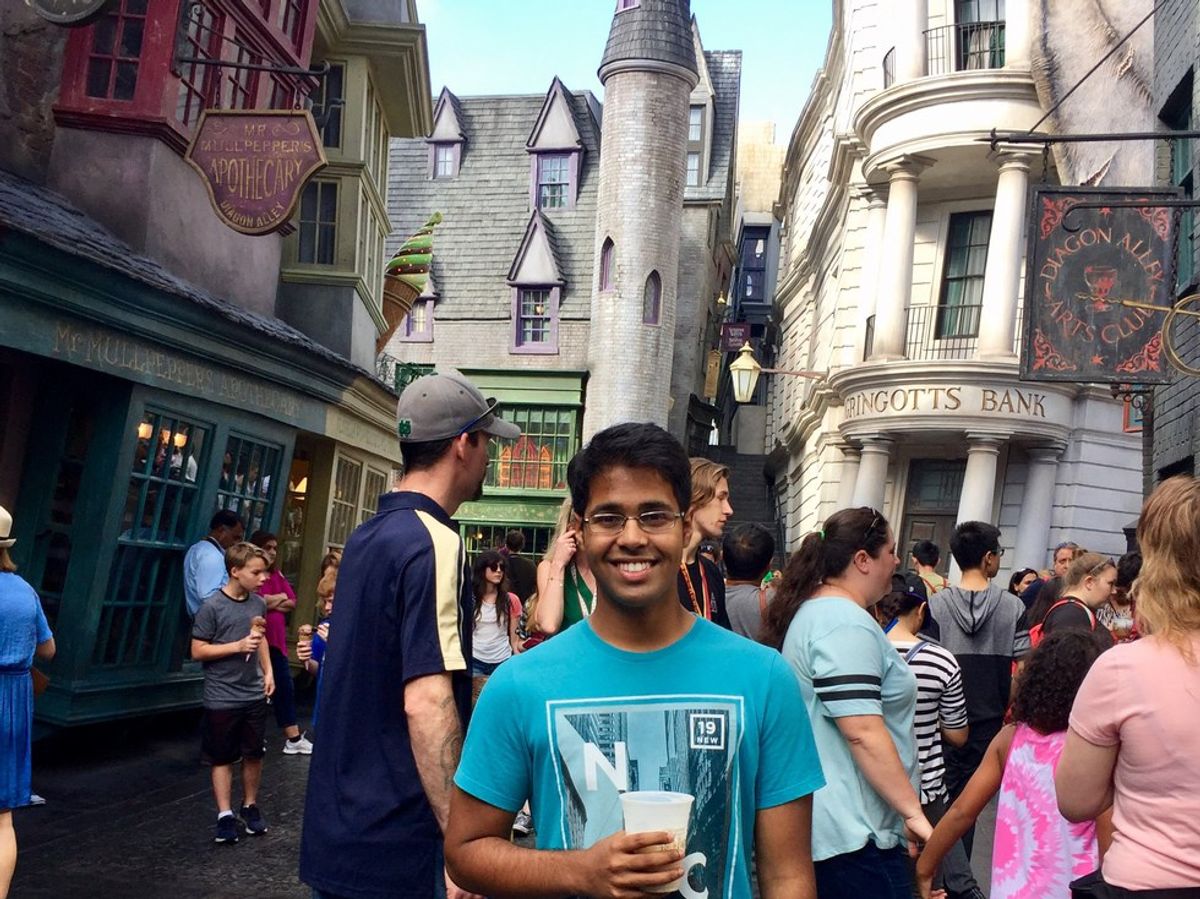 There’s nothing like spending Christmas in eighty-degree weather, shorts, and sunshine. This was the first time my family and I had gone away for Christmas and it was a fun experience in Florida and definitely something I felt like we all deserved.

As soon as I stepped off the plane, I could already feel the pleasant warmth in the air. It reminded me of my visits in India due to the similar smells and heat I captured as we boarded off the plane but Orlando, Florida was the destination this time. We hadn’t been to Florida since I was very young but we felt that it was a good idea to take a trip to the sunshine state when the cold was at it’s prime in Massachusetts.

We got out of the airport and headed to a beautiful hotel, where we were guided into the entrance with a series of palm trees that were wrapped with bright lights. The lobby was decked with elaborate Christmas decorations, a big Christmas tree, and festive designs as it was Christmas Eve.

We got into our room, ate some Mexican food, and planned out our day for Christmas Day. We decided to head to Orlando Studios, more specifically, the Wizarding World of Harry Potter!

I’m sure most kids were into Harry Potter when they were growing up. My brother and I definitely were. We read all the books, watched all the movies, and even had our dad hand make our own wands in middle school. We loved everything Harry Potter related so we knew we had to come to Orlando Studios for the next big thing.

As we were walking down all the other little parks in Orlando Studios, we began to hear Harry Potter music from the films and sure enough, the Knight Bus was there along with the apartment building from The Order of Phoenix. Soon enough we were where we wanted to be: Diagon Alley

For those of you who don’t know, Diagon Alley is kind of like an outlet mall where the characters would go shopping for school supplies, robes, wands, and a bunch of other magical items. The hustle-and-bustle atmosphere was captured perfectly and we couldn’t help but appreciate the extraordinary attention to detail that the creators of the park had.

“Flourish and Blotts”, “The Leaky Cauldron”, “Gringotts Wizarding Bank”, “Madam Malkin’s Robes for All Occasions”, it was all there. We tried on Gryffindor robes, bought a wand out of the thousands of wands in the famous “Ollivander’s”, and saw the different joke items from the “Weasley’s Wizard Wheezes”.

It was a great experience to be where the wizards and witches from the series were and even greater to see so many enthusiastic fans walking around in robes and Harry Potter merchandise. To enrich the experience even more, those who had wands were able to perform magic at different spots.

We went on the “Escape from Gringotts” ride which was like a roller coaster except they had projections and effects to make it an even more realistic experience. On the entrance, we saw goblins all over a beautiful room and it really felt like they were there. But I don’t think I’d want them handling my college debt because I’ve read that they’re pretty impatient when it comes to dealing with that much money.

When we got on the immersive ride, there was a part when one of the wizards was fighting off a dragon and when it spewed fire, you could feel the explosive heat radiating from its flames and also feel the water splashes from the spell to negate it. It was very well done and I couldn’t help but appreciate the time and effort it took to make a ride come alive like that. But we were far from over as we continued our adventure at Platform 9 and 3-quarters when we boarded the Hogwarts Express.

The train felt like it was exactly out of the movies. When we entered the cabin, they had a theatrical experience where you could see dementors, Harry, Ron, Hermione, and Hogwarts from the windows and cabin doors. It added to the experience and we continued to be amazed when we reached the charming and magical village of Hogsmeade.

Hogsmeade had little apartments and shops all through the area and we saw iconic places such as “The Three Broomsticks”, “Honeydukes”, and “Zonko’s Joke Shop”.

But first we saw the massive barrel of the popular drink in the wizarding world, Butterbeer. We were excited to try it and it really was a delicious treat that was similar to a sweet soda topped with whipped cream. We walked around the area, bought apparel, and finally went to Hogwarts!!

Hogwarts was castling over the area and as we entered the legendary school, we saw the moving portraits all over the walls that engaged in conversation with each other. It was definitely entertaining to see the founders of Hogwarts argue with one another before seeing Dumbledore, Harry, and his friends ahead.

There were very impressive holograms that had perfect lighting and coloring to make the projections very realistic. It really felt like the real actors were there because they were just that good! As we made our way we saw the ceiling was decorated with beautiful floating candles and just ahead, there was another immersive ride, similar to the Gringotts one.

This one, however, truly blew me away. There was one part in particular that did this and it was when Harry and Ron took us into a Quidditch game. The object that we were riding on suddenly moved down at an extraordinarily fast pace as we saw Harry fly down on his broomstick. You could feel the roaring winds, feel the weight of the broomstick, and hear the thunderous cheering from the Quidditch fans. It was so surreal!!

After recovering from the amazingness, we walked around Hogsmeade more, took the train back to Diagon Alley, watched live performances from famous musicians in the Wizarding world, and after many magical hours, left the park.

I was holding the wand I got from Ollivander’s, remembering the heat of the dragon’s fire, the taste of the rich butterbeer, and thinking about how real the Quidditch match felt. It truly was one of the most amazing experiences I’ve been on and I highly recommend any fans of the series to venture to The Wizarding World of Harry Potter. Words themselves do not do it justice!