A look into the disastrous executive order. 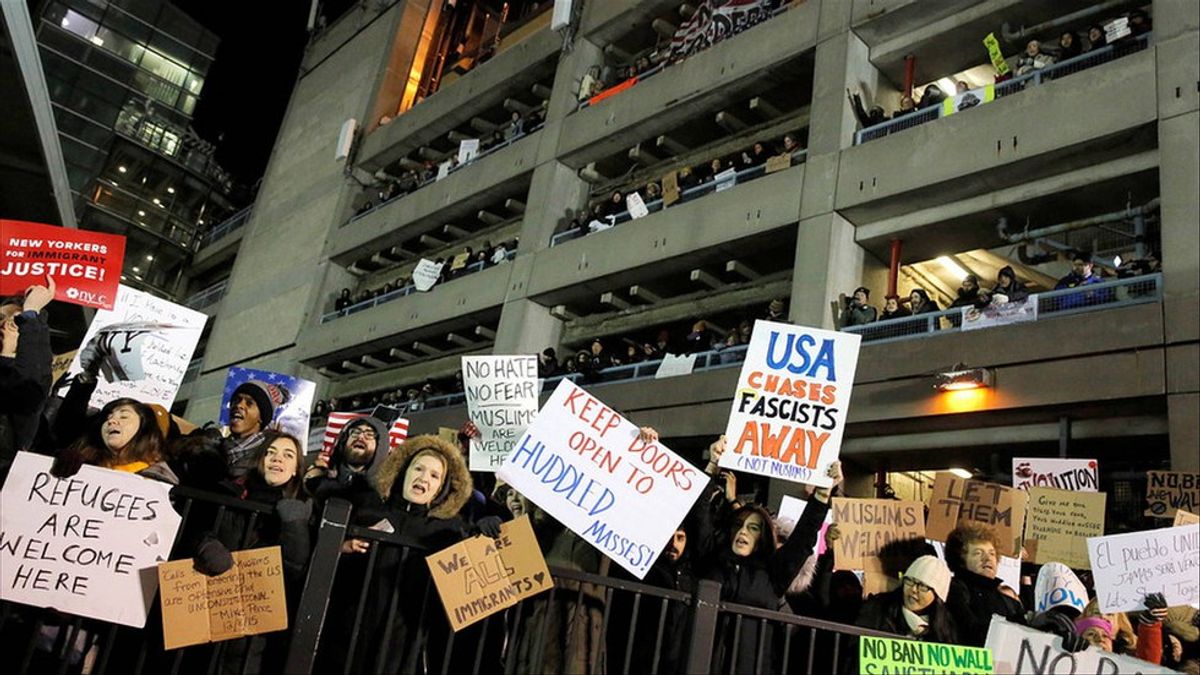 I’m sure by now we’ve all heard about (and seen the effects of) Trump’s sweeping executive order, which effectively stopped all refugees from entering the United States.

Many sources state that the explicit details of the order were not properly clarified, and that the creation of the order itself did not follow traditional review process expected for such documents. The result was widespread confusion, leaving dozens of travelers stranded at airports across the US. In JFK International Airport, 11 incoming travelers were detained for over 16 hours. They were not given access to lawyers and had their electronic devices confiscated. On resounding story is that of 26 year old Mohammed (who declined to give a last name). His elderly Aunt (a Yemeni citizen flying out of Jeddah, Saudi Arabia) was traveling to the US to move in with Mohammed (a US citizen), and had been granted a family visa. But instead of making it through the airport, she was detained, and Mohammed was unable to speak to her, or inform officials about her health issues (diabetes and high blood pressure). She was instead scheduled to be flown back to Jeddah at 8pm on Saturday, January 28.

There are many horror stories like this accompanying the controversial “Muslim Ban,” and even more tales of despair from the other side of the sea; refugees who never even made it off the ground.

Nairobi, Kenya, 40 hopeful immigrants are seated in a transit center for refugees, run by the International Organization for Migration. Many of them have been waiting for the chance to start a life in America for years. Some have been living in the local refugee camp for 26 years, a few were even born there. It has taken 11 to 12 years for their applications to come to the US to be approved, and now they are being told that this route, the legal route, has failed them. Within the 120 day travel ban, their applications will expire, and they will have to begin the process all over again. Many of them have sold their homes and possessions at the camp. They have been left with no place to go.

Looking at this, you have to wonder.

Wonder about the legitimacy of it, the motivation, the promises this ban promised to keep, and what they say about our American values. We’ve all heard about the Iranian baby who was detained. But what of the people left without a place to go, all across the world? The argument is, of course, that this will help weed out terrorists. But actually, 0% of fatal terror attacks have been carried out by refugees. And the vetting process we use to screen refugees? Well, there will never be a 100% guarantee it will be successful.

Everyone likes to use that old, “Poison M&M” analogy: would you eat a handful of candies if 10% of them would kill you?

And my answer will always be: they aren’t candy; they’re human beings.

If you could meet those people face-to-face and tell them that no matter what they did, how legal their immigration status was, how long they’ve waited to do this “the right way”, would you still tell them no?

I’ll leave you with this: