All lives don’t matter until black lives do. 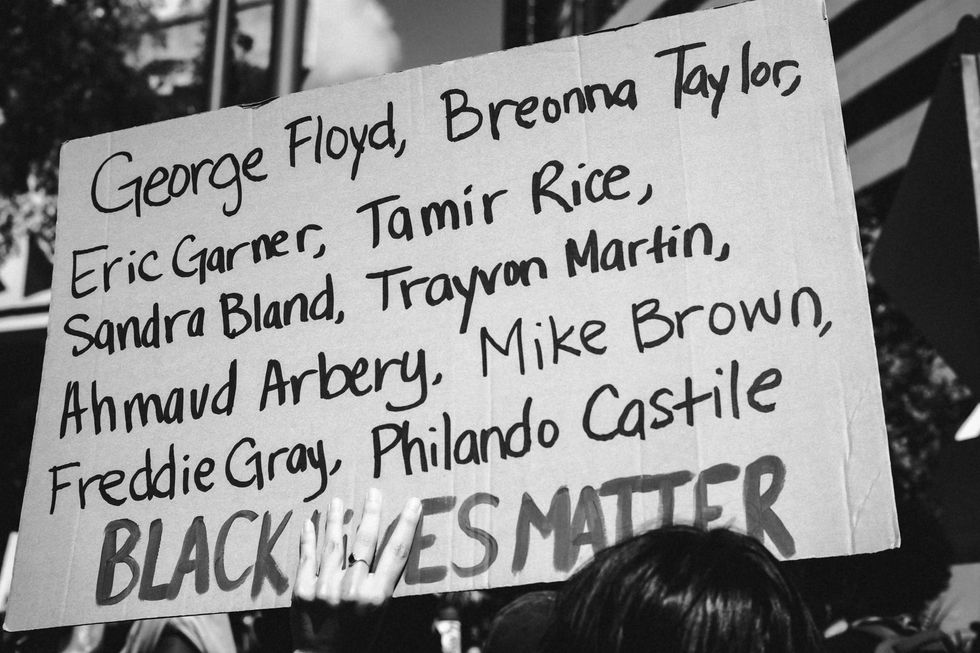 Racism remains a deeply rooted issue that still plagues our country. Black lives are in danger every day and they are who matter, not the personal feelings of a white person. And if you say "all lives matter" or "blue lives matter," I mean this in the most offensive way possible, go f*uck yourself.

I'm angry, I'm hurt, I'm sad. But this isn't about me, this will never be about me. This is about the protection of black lives. As a white woman, I will never understand the pain and fear you feel every day. But I hear you, I support you, and I will stand by you.

For the white people reading this article let me make this very clear: it is not the responsibility of black people to unteach racism. Read articles, read a book, understand why protests are happening, and use your white privilege to speak out against racism.

I don't want to write this article to make it about myself and my feelings, but rather to list resources to help educate other white people.

*I would like to comment that I am not writing this article to give myself clout, I want to use my platform to do any good that I can. If I make any money off this article I will be donating it to Reclaim the Block and The Bail Project.*

If you have the money, here are some places to donate to support black lives:

A petition to raise the degree of the police officer who killed George Floyd (Update: the charges have been raised. Thank you to all who signed!)

"Stamped from the Beginning" by Ibram X. Kendi

"A People's History of the United States" by Howard Zinn

"So You Want to Talk About Race" by Ijeoma Oluo

"The Burning House: Jim Crow and the Making of Modern America" by Anders Walker

"The New Jim Crow: Mass Incarceration in the Age of Colorblindness" by Michelle Alexander

"The Condemnation of Blackness: Race, Crime, and the Making of Modern Urban America" by Kahlil Gibran Muhammad

"Dying of Whiteness" by Jonathan Metzl

"A Different Mirror: A History of Multicultural America" by Ronald Takaki

"How to Be an Antiracist" by Ibram X. Kendi

"Evicted: Poverty and Profit in the American City" by Matthew Desmond

"Nobody: Casualties of America's War on the Vulnerable, from Ferguson to Flint and Beyond" by Marc Lamont Hill

"Lies My Teacher Told Me: Everything Your American History Teacher Got Wrong" by James W. Loewen

"Blackballed: The Black and White Politics of Race on America's Campuses" by Lawrence Ross

"The Color of Law" by Richard Rothstein

"Why Are All the Black Kids Sitting Together in the Cafeteria?" By Beverly Daniel Tatum

"The Warmth of Other Suns" by Isabel Wilkerson

"The Fire Next Time" by James Baldwin

"The Autobiography of Malcolm X" by Alex Haley and Malcolm X

"Between the World and Me" by Ta-Nehisi Coates

"Incidents in the Life of a Slave Girl" by Harriet Jacobs

IF YOU DON’T HAVE THE MONEY TO DONATE

A video was posted on YouTube that was created to help donate to Black Lives Matter for those who don't have the money to donate. Take off your ad-blocker and watch the video on a YouTube account (don't watch anonymously). There will be a lot of ads and all the revenue from those ads will be donated to the organizations listed in the video. Do not skip these ads! A list of petitions to sign are listed in the description of the video.

You can find the video here.

"White privilege means I can do the following without fear of being harmed or killed.

I can be detained by police… George Floyd couldn't.

I can relax at home… Breanna Taylor, Atatiana Jefferson, and Kathryn Johnson couldn't.

I can have a mental health crisis… Anthony Hill couldn't.

I can defend my girlfriend from armed intruders… Kevin Davis couldn't.

I can run (unarmed) from a cop… Walter Scott couldn't.

I can ask for help from a stranger… Renisha McBride couldn't.

I can play with a toy gun… Tamir Rice couldn't.

I can lawfully carry a weapon… Philando Castile couldn't.

I can get a traffic ticket… Sandra Bland couldn't.

I can walk home with skittles… Trayvon Martin couldn't.

I can party on New Year's Eve… Oscar Grant couldn't.

I can go to church… The Charleston 9 couldn't.

I can shop at Walmart… John Crawford couldn't.

I can owe a fine… Nicholas Thomas couldn't.

I can take out my wallet… Amadou Diallo couldn't.

I can breathe… Eric Garner and George Floyd couldn't.

Say their names. Enough is enough. Educate yourself and use your voice to speak out against racism. Being not racist isn't enough anymore, we need to be anti-racist.

All lives don't matter until black lives do. #blacklivesmatter