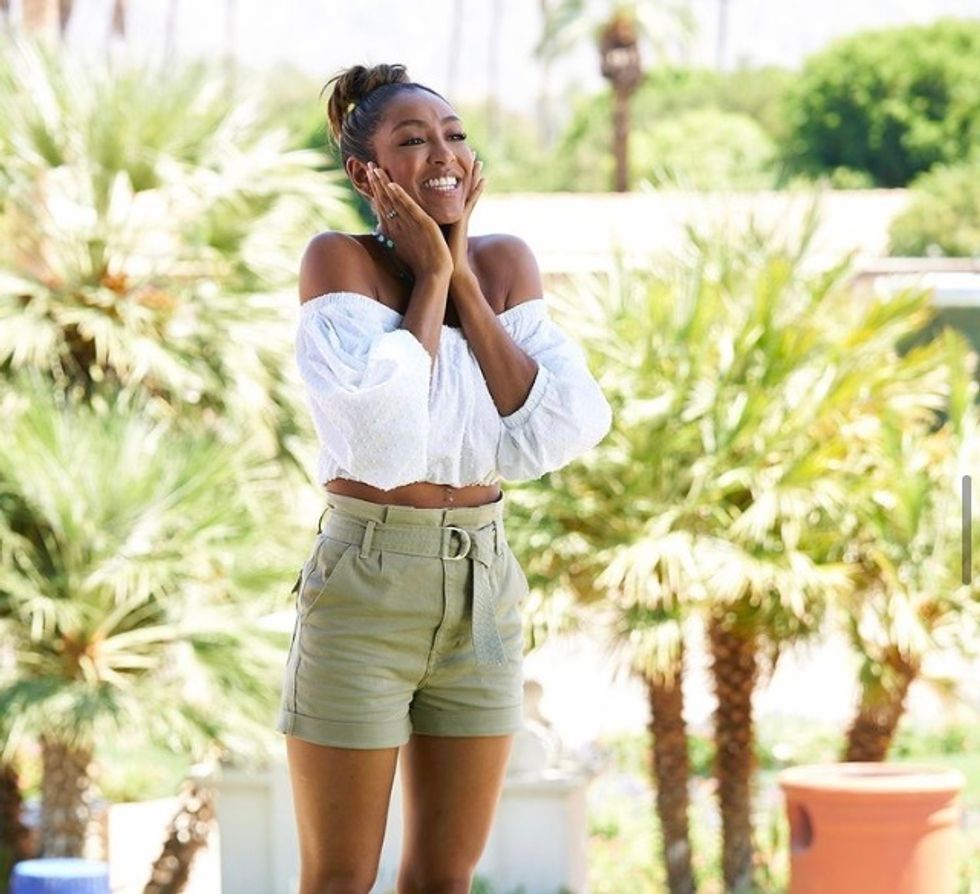 Hi everyone, and welcome back to another Bachelorette recap! Shall we get started? For a refresher, go and read the week 4 and 5 recaps here.

The second group date of the episode was one of the teaching dates! Where the men are smashed into tiny desks and have to answer questions that those of us still in K-12 schooling would find very simple. I love these, I think they're so funny. Making me laugh even more, though, was Harvard-grad Bennett getting some of the questions wrong! However, he did win the competition to be the manliest man out of the group? Not exactly sure what they were competing for, wasn't very memorable to me. But what was memorable, however, was that Bennett wore a bathrobe to the competition and ALSO to the semi-formal after-party. Didn't like that very much.

However, Ed and Chasen both deserve the title of instigator, because they really can't leave anything alone. Ed gets very much involved with the drama in week 7 too. They were fighting over grammar? Like I really didn't understand it or care very much.

At the cocktail party before the rose ceremony is the moment when I definitely decided that "I have a big fat crush on Ben," as I wrote in my notes on the episode. He caught my eye from the very beginning and is just so smooth! I said I was very excited to see how the relationship goes, and I'll definitely see that next week.

For the first group date of the week, there was a wrestling date. A lot of drama stems from this date. However, the trash-talking part of the date really made me laugh. John yelling "I THINK YOU'RE A REALLY NICE GUY" instead of anything even remotely insulting brought a big ol' smile to my face.

The drama starts when Ed can't wrestle because of an old injury. Chris Harrison asks if anyone would like to step up and wrestle in his place? Noah does, as the other men in the house are watching the matches, even though he isn't technically on the date. So he comes in and wrestles. The other men are P I S S E D! I don't get why they are, Chris literally needed someone to step up and he did. The other men are just jealous because it gets Tayshia's attention. Then again, he does monopolize her time at the afterparty (he even lets her shave off his awful mustache,) and it results in some bad consequences for others.

Especially my darling Ben. Ben is more bent on getting the rose than vying for Tayshia's attention. His strategy is to wait and go last so their time together is fresh on her mind when she gives out the rose. Because of Noah monopolizing the date, Ben doesn't get to spend time with Tayshia. He planned on making her a special nightcap. When he tries to pull her aside, she says the date is over and she's disappointed he didn't come to get her attention sooner. Ouch. and with that, here comes Week 7!

This episode starts off with a songwriting competition to win the one-on-one date. Very entertaining that none of these men wanted anything to do with this competition. Bennett working on his rhymes was pretty funny though. The songs all ended up absolutely awful. None of them were even remotely good. However, Ivan brought Tayshia near him to sing directly to her, and it won him the one-on-one!

This one-on-one was super cute and special because they just stayed in Tayshia's suite, ordered room service, and played games! The floor is lava was very cute and fun to watch. There was also a very serious and sincere conversation about George Floyd and the Black Lives Matter movement that was very actively happening while the show was filming. It was awesome discourse, and I'm very glad it was included in what aired. Ivan is a very sweet guy, and the two definitely get along very well.

The second group date of the week is truth or dare! Very funny, very gross, and very awkward. The men ran around the property doing various tasks, the last being to eat an entire habanero pepper and then confess your feelings for Tayshia! Very funny, watching these grown men cry and cough while trying to impress her.

The conversations afterward were good! I laughed when Zac said he was "in his feels" with Tayshia because he didn't quite use the phrase exactly correct.

The night before the rose ceremony, Ben decides to go talk to Tayshia in her room before the rose ceremony. He was disappointed in himself because Tayshia is disappointed in him. But wait! Ed also wanted to go to Tayshia's room! The cameras flash back and forth to the two of them walking to her suite. Who will get there first? Ed, it seems. But wait! Chris Harrison opens the door instead! He asks Ed why he's there at 2 am but invites him in for a glass of wine where they both talk awkwardly. Oops.

Then Ben reaches Tayshia's room. He apologizes, Tayshia forgives him, and they finally share that nightcap he was planning on doing earlier in the week.

The happiness fades when Noah straight-up LIES to Tayshia that people in the house say she gave Noah the wrestling group date rose to cause drama. She was not happy. Neither was I! He totally lied and now the other men are going to pay the price for it. She ends the cocktail party early and gives out her roses.

I'm very surprised Ed is still around. Probably so he can keep causing fights. Or Chris Harrison enjoyed their intimate time alone together. One of the two.

That's our latest recap! Happy to report that I think I know all the names of the men left at this point! Here's to the next two weeks!