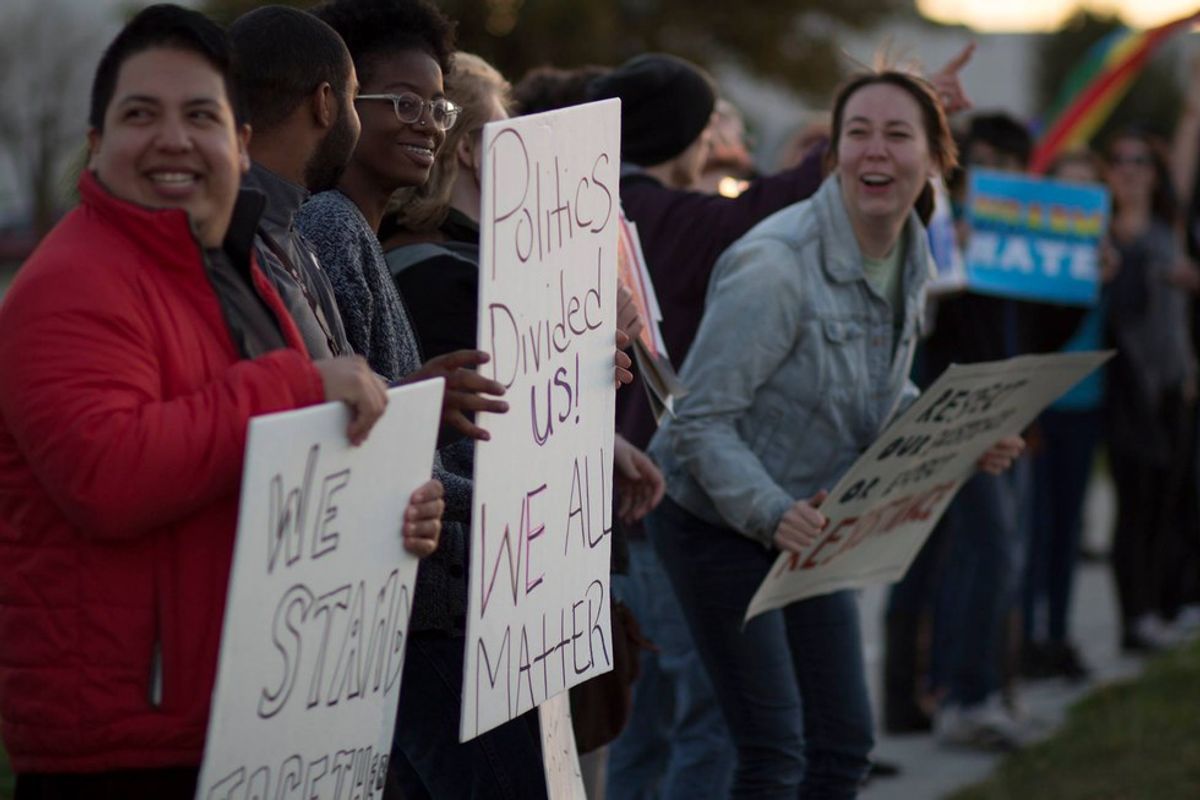 On Friday, November 11th, I attended a peaceful Anti-Trump protest. It was one of the best experiences of my life.

It was a chilly afternoon, but the love and support of our fellow protesters and some encouraging passerby's kept us warm. We assembled to protest many things: the DAPL, the electoral college, women/minority safety, LGBTQIA+ rights and most importantly, to protest our new president elect.

Throughout the 4 hours that we were out there, we had very mixed reactions from the people driving by. While some where filled with love and encouragement, some where also very negative. There were multiple instances of people yelling, "F*ck you!" and, "Get a job," (which is funny because most of us actually have jobs). One person even went as far as yelling at us and calling us "f*ggots". But no matter what negative things people yelled at us, we always responded with, "We love you anyway!"

The love definitely outweighed the hate, as many passerby's even joined in. One man, who was a homeless war vet from Poland, even went as far as joining us before hand, telling us the story of how he came to America, and how dissatisfied he was with some of Trump's plans for his next 4 years as President. He told us his first "battle scar" he got was actually from when he was living on the streets of New York when someone threw a rock at him out of spite. However, despite all the hateful people he had encountered in his life, he was one of the most positive people I've ever met.

We weren't out there to get Trump removed from his future presidency, but instead to show that we wont stand idly by and allow racism, sexism, homophobia, and overall prejudice run this country. It is 2016 and there is no room in the United States for these things. We aren't "crybabies" or "sore losers," but instead we are a people who unite to show that we should be accepting of all races, genders, and sexualities. It's important to exercise your right to free speech and protest because we need to show we won't let racism become a bigger problem than it already is, and that we need to stand up for what we believe in. As socialists, it is important to us that we organize and increase class consciousness as an effective way of standing against a Trump-Pence presidency. Staying silent encourages hate.

Sara Beatty, a 22 year old from Southern Illinois, put this protest together. She made extra signs for people who didn't have time to make some, collected donations for homeless winter care-packages, and is in the process of turning her home into a safe space for members of the LQBT community, Muslims, and POC's who feel unsafe because of the recent election. She's a wonderful person who is taking time and money to make others feel safe and welcomed.

If you are interested in helping stand against them, Democratic Socialists of America and Socialist Alternative are two leftist organizations that are active in protesting the new presidency. Many local labor unions are likely to be socialist leaning and potentially protesting as well. One such event is a nationwide walk-out general strike on January 20th, 2017, in order to protest the inauguration of Trump.