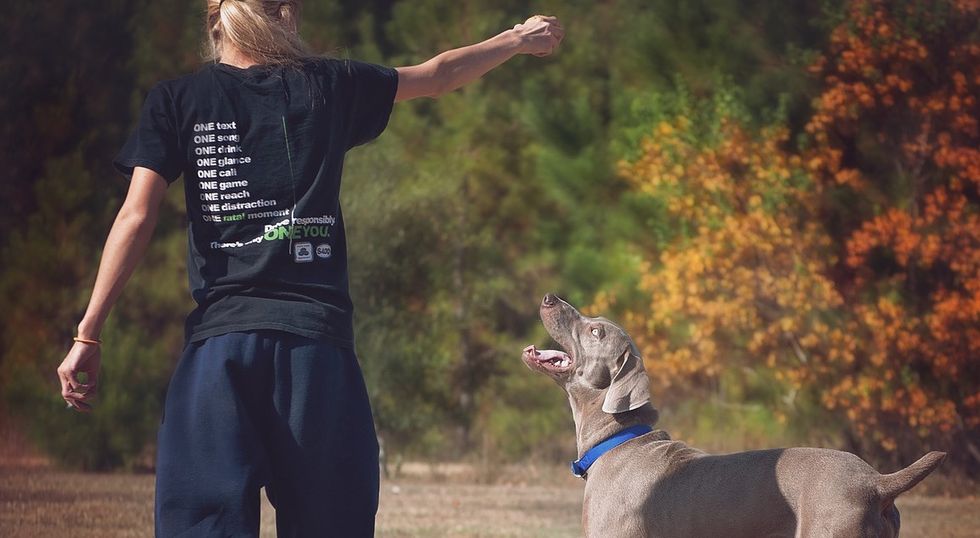 This isn't an anti-ESA rant. I am all for dogs providing a better quality of life for their owners, in whatever way that may be.

But I am against the growing number of people who throw the words "I'll just say I have an Emotional Support Animal, then they can't tell me I can't have my dog." I hear this too often, and I've held my tongue long enough.

Here is the simple truth: Emotional Support Animals ARE NOT REQUIRED TO HAVE PROFESSIONAL TRAINING.

Let me tell you how easy it is to acquire your own ESA. About nine years ago I was looking to move into an apartment, but was unsure about how having two large dogs would affect that. I was training dogs at the time and thought getting letters of recommendations from various clients that knew and interacted with my dogs regularly might help. I even asked our mail carrier, who not only agreed but also mentioned that pet guideline didn't always apply to certified Therapy Dogs - which both my Rottweiler and Silver Lab/Chesapeake Bay Retriever Mix were.

I was relieved to find out that not only would my dogs be allowed, but the pet fee and deposit would also be waived! Both of my dogs went through training and certification to become Therapy Dogs, which are dogs that volunteer their time and love to visit various places. This could be the hospital, schools, or nursing homes. My girls especially loved Saturdays at the library, where kids would read books to them.

Therapy Dogs are different than Service Dogs because their job is not to save someone's life but to simply cheer someone up. They are required to pass extensive testing to ensure they can handle the environments they will be exposed to.

Hospitals, nursing homes, schools, and even libraries have a lot of activity and can be very loud. Beeping machines, small spaces, and constant activity mean a significant amount of stimulation. Dogs must prove that they can remain calm, and most importantly, cannot be aggressive in any way. Owners (also called handlers) must also show that they can act appropriately when handling their dog in public, meaning they can control their dog in a manner that isn't threatening or distracting to everyone around them. These dogs are not allowed to go everywhere with their owners, only to designated places where Therapy Dogs are asked to volunteer at specific times. A Therapy Dog will never be required to "work" for anyone full-time, or even part-time.

After finding an apartment complex that allowed my girls despite their policy about dogs, I knew when the time came to look again; we likely wouldn't have the same amazing luck.

I eventually came across a complex that would not allow my Rottweiler, because, well - you know. They're on the banned breed list which means every Rottweiler is aggressive and a danger to anyone within three states of it! It didn't matter that my big, goofy dog was thoroughly tested for any signs of aggression because she would end up spending hours on an uncomfortable floor while small children draped themselves over her and shoved books in her face "because the pictures are also important." However, one property manager had the perfect solution for me. If I wanted my dog to be able to live anywhere, all I needed to do was tell my doctor I had anxiety and depression, and that my Rottweiler helped me deal with it.

"Your dog doesn't even need training or certification!" He told me, also adding that if my doctor wouldn't sign off on this lie, PLENTY of other doctors would, and I didn't even need to know them or be their patient.

Basically, I was being told that any person with an aggressive and untrained dog had easy access to a document that would let their dogs live anywhere. Some even claimed that this meant they could bring their dogs wherever they went. It didn't make any sense to me, but apparently, this wasn't a concern to anyone involved in this scheme. Not only was this practice being done almost ten years ago, it's somehow survived and only gotten worse in recent times. A guy at the dog park said he had a few hours to waste because he wasn't allowed to have a dog in the townhouse he was living at. The owners of the property "had been staking him out" which was fine because he was meeting up with a friend who was bringing documentation that said his dog was his Emotional Support Animal and then he could go home because they wouldn't have the right to refuse him or evict him.

Okay, so now people were using drug dealing tactics to get fake papers for their fake Emotional Support Animals?!

I can't even imagine what this situation is going to be like just a few years from now. There are people out there who truly benefit from what Emotional Support Animals were originally intended to provide. But those who are abusing the use of ESA are hurting individuals in need, including those with Service Animals. Think twice before going around and bragging about your "Emotional Support Animal."

You might just piss off the right emotionally unstable person who doesn't have an ESA dog because they tried to go about it the right way, instead of the shady way you did.