I am Glad I Got Stranded In An Airport.
Odyssey

I am Glad I Got Stranded In An Airport.

Would I do it again? No way. 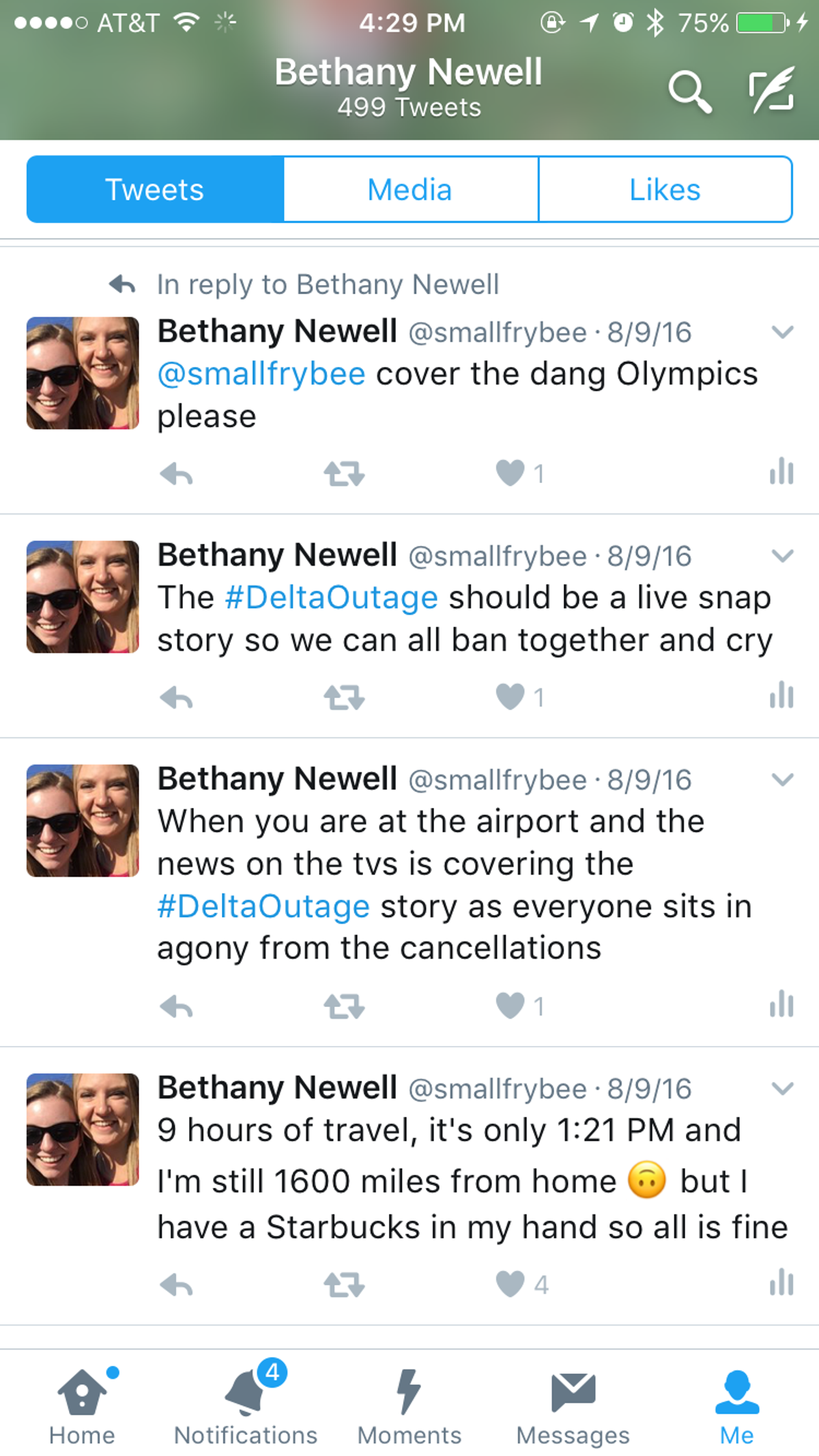 Although this may seem like a very odd thing to say, I believe it to be true. Do I want it to happen again? Absolutely not. Do I recommend it? Well, it depends on the circumstances.

If you did not keep up with the news this summer, Delta Airlines had a major computer system crash. Over 600 flights were canceled in a matter of three days in early August. Unfortunately, I was one of the thousands of people affected. I am not complaining though, because my summer and my life were actually positively affected by this disaster. So, let's go through the time line of how the events unfolded.

Day before I was scheduled to fly out of Kalispel, Montana (an airport with maybe five gates): My aunts were letting me calmly know of the situation and just guaranteed to me that we will get to the airport extra early. I was anxious, like any other time I fly, but knew I could do nothing about the problems so I went about my day hoping to make the best of my last night on Flathead Lake. Then, going to bed and sleeping in my aunt's bed, I could not fall asleep until what seemed to be at least midnight. My mind was going and I was getting constant email updates about my many different flights being delayed or rerouted or something.

Day of the flights/adventure before 7:00 AM: With less than three hours of sleep, I woke up, put in my contacts, brushed my teeth, and put on a cute and comfy outfit. I grabbed a granola bar and got in the car with my aunts. We arrived at the tiny airport around 4:15 and I was through security by 4:30 and on the search for coffee. Everything was going smoothly until I received an email stating that my flight from Salt Lake City, Utah to Minneapolis was canceled. I went into a bit of panic mode. I called my dad and aunt. Both advised me to get out of Kalispel because there are only a few flights a day and I should at least get to a major city with more flight options and opportunities. I agreed and began waiting to board my flight. There was another girl, around my age, also crying to someone on the phone and I knew she was experiencing the same trouble as me.

Day of the flights/adventure before 10:00 AM: When I landed in Salt Lake City, I was not expecting to be able to go straight to my gate and board any on-time flight to Minneapolis. Instead, I continued to receive emails telling me about all of these different flights I could be waitlisted to get on for the next day. Meanwhile, I was stuck in the airport with no way to possibly leave. I was not able to rent a car and I knew absolutely no one who lived there. Panic began to set in. I called my mom in which we discussed that it would be best for her to book me on any other airline available to get me at least to Denver because we have friends there.

Day of flights/adventure on another airline: By some grace of all goodness in the world, my mom was able to book me a seat on airplanes to go home for less than $1000, which is what the going rate was for any seat that day because of all the troubles. With a ticket in my hand for another airline, and eight hours ahead of me to waste. I headed down to the baggage area to tie up any loose ends that may have come up due to the insanity that just occurred. Upon finishing dealing with the very calm, cool, and collected baggage agent, I began making my way to the check in desk for my new airline. I could not find the desk to check in because the lines for Delta check in were absurdly crowded and I could not see a thing over anyone's head. Then, I made my way back upstairs because that is where the majority of check in desks are for most airports. Teary eyed for no clear reason, I asked a nice looking woman where the check in desk was. She kindly brought me to a security officer and asked her with me. Why I didn't think to ask the security in the first place? I'll just blame my lack of sleep.

Day of flights/adventure going through security round 2: I successfully checked in, printed my boarding pass, and passed through the security scanners. I was in search of food. Any food really. It was far past noon but hunger had never occurred to me because other stressful events had control of my body.

Day of flights/adventure laying on the floor: After eating a bagel and drinking a mocha coffee, I was ready to park myself near an outlet and close my eyes. I was one of those people. The ones you see literally sleeping on the floor with their headphones in and a sweatshirt under their head. But I really did not care at that point, I was just happy to be off my feet and have a solid plan ahead of me. Everything was about to be just fine.

In closure, I traveled for nearly 22 hours that day with maybe three hours of sleep in 48 hours. I was not in the bests of moods, but I made it through by relying on my newly downloaded drama, my superior headphones, my trusty water bottle, my hand wipes, and my phone charger. It was a grand time. I had no choice but to laugh when the news station showing at the airport was covering the story about the "Delta Airlines Outage with Thousands Stranded!" Yeah we are having a great time, #livingthenewsstory. In all reality, I did not have much to complain about. I did not miss any vacation time, lose my luggage, and have children tagging along. Luckily, I did have a good attitude, a set of parents who were willing to spend the funds on another ticket, and a handful of people telling me that if I didn't make it home from wherever I connected to, I was welcome to stay with them.

So, I would not do this again, but I do recommend it. I had no choice but to use the resources around me and have faith that everything would work out. Talk about an exercise in mental strength. Happy travels everyone, and may everyone arrive at their destination safely, no matter how or when you get there.

Caitlin Marie Grimes
University of South Florida
7007
Beyond The States