Songs with which you probably aren't familiar that beautifully capture the experiences and strengths of the female-identifying. 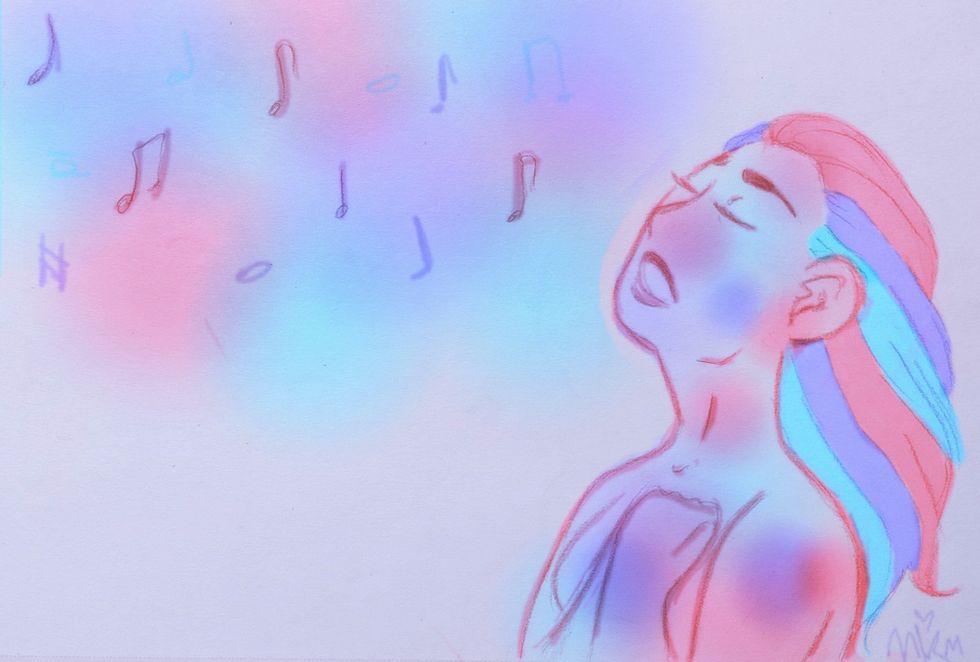 Music can highlight and articulate the struggles and experiences of a people in peaceful, sophisticated ways. While many of the following musical pieces address subjects that are not relegated specifically to female-identifying individuals, and some were co-written by male-identifying writers, what is special about them is the femininity of their expression. The women who write, arrange and express these messages do so in a manner that conveys the quiet knowledge, strength, and conviction of the feminine. They represent the woman's voice that can resound regardless of volume, and the music itself, as natural as an extension of the body, serves to deliver wisdom both inherent and learned by the feminine experience.

1. Eyes on the Prize | Julia Easterlin

Now known as Hite, Easterlin began as a soloist who used a loop station to recorded layers of her voice into vast musical pieces. In this transformative arrangement of the Mavis Staples song, the transcendent nature of her voice interacting with itself coupled with Staples' message of persistence make for a lesson in staying strong and recognizing what is beautiful and important.

With the support of a swelling brass section, DiFranco delivers the message that victory takes time and may present itself in strange ways, and one day one who has labored will have the simple but immense pleasure of control. DiFranco's vocals convey a distinctly feminine attitude to recognizing the value of years of toil and patience.

This song, featured on an album written after the death of Case's grandmother and estranged parents, speaks of an abandonment—an unfortunate but perpetual theme of womanhood—and how it can powerfully and debilitatingly transport a woman to girlhood helplessness.

Originally written by Pulitzer Prize-winning lyricist Bob Dylan, "Just Like a Woman" tells of a facade of strength and what lies underneath. Women are often the creators of protective shields. Nina Simone's rendition yields an orchestral build to convey the agony of the conflict between the construction of the outer woman and the gravity of the fragile inner girl.

Elle King is recognized for her acid tone, but "Kocaine Karolina" is a piece which allows her voice to work gently and to an equally devastating effect. King paints a ghostly portrait of societal pressures upon women today, which in this case result in a woman's destruction. It is shockingly plaintive, distressing, and honest, and captures the awful experiences of addiction and self-destruction.

This piece captures the momentary failures of strength which meet us every so often. While Jones did not write alone, her impossibly soft vocals speak to women who feel they must always be strong and resign themselves to vulnerability as though it means failure.

The traditional role for women is that of a caretaker, and though this role has created barriers for generations of women across all walks of life, there is a poignant truth to these empathetic powers. In this acoustic/folk-rooted song, Joan Shelley beautifully articulates caretaking as a strength and wishes to share a home with someone whose struggle is palpable to her.

What prevails among 22-year-old Birdy's albums is a languid, resigned, mature sadness. "Words" deals with the pain of miscommunication and misunderstanding in a distinctly feminine way: Birdy, while describing sorrow and tears, is still a young woman in control. We feel deeply but what we feel does not control us.

The Roches, known for their wonderfully odd tunes full of personality, expertly write of girlhood dreams without minimizing their emotional importance. This song off of their 1989 album "Speak" displays feminine wisdom appropriate to their ages at the time, as they agonize over an exit but know that they are the only ones who tough enough to leave, understanding that with instinct and knowledge comes such weighty responsibility.

10. Came So Easy | The Weather Station

For people who have had to fight for much of what they possess, trust does not come naturally. This piece explores the strangeness of experiencing kindness for one who is unaccustomed to ease. Staccato lyrics that are contrasted by an easy, flowing acoustic that conveys that which occurs naturally and wholesomely.

Pop duo Sylvan Esso blends acoustic and electronic in a portrait of the bare and unapologetic woman. The production value, like singer Amelia Meath's voice, feels stripped and borderline uncaring, along with lyrics that convey a woman who redirects proprietary and possessive remarks so they fuel and strengthen her. It is a lesson in confidence and self-ownership.

The British sister trio frequently subvert feminine expectations by writing of an inability or unwillingness to love. A belying, cheerful acoustic allows Camilla to languidly describe feeling nothing for anyone, belonging to no one, and accepting the presence of this coldness within her. The Staves are not afraid to explore the humanity and femininity of pitilessness.

Marling, writing and performing the album "Once I Was An Eagle" almost entirely by herself, comments on naivety and refuses to "be a victim of chance or circumstance or romance." She breaks the confines of gender conformity by claiming the pride and stubbornness of one's grandfather and the strength of one's grandmother. This song is about preserving oneself, recognizing one's strength and size, and affording oneself the space to exist as one is meant to.

Re-Casting 'The Office' With The Genders Swapped