The Worst Thing About Homelessness Is What You'd Never Expect

The Worst Thing About Homelessness Is What You'd Never Expect

Homeless people share what pains them the most about their situation. 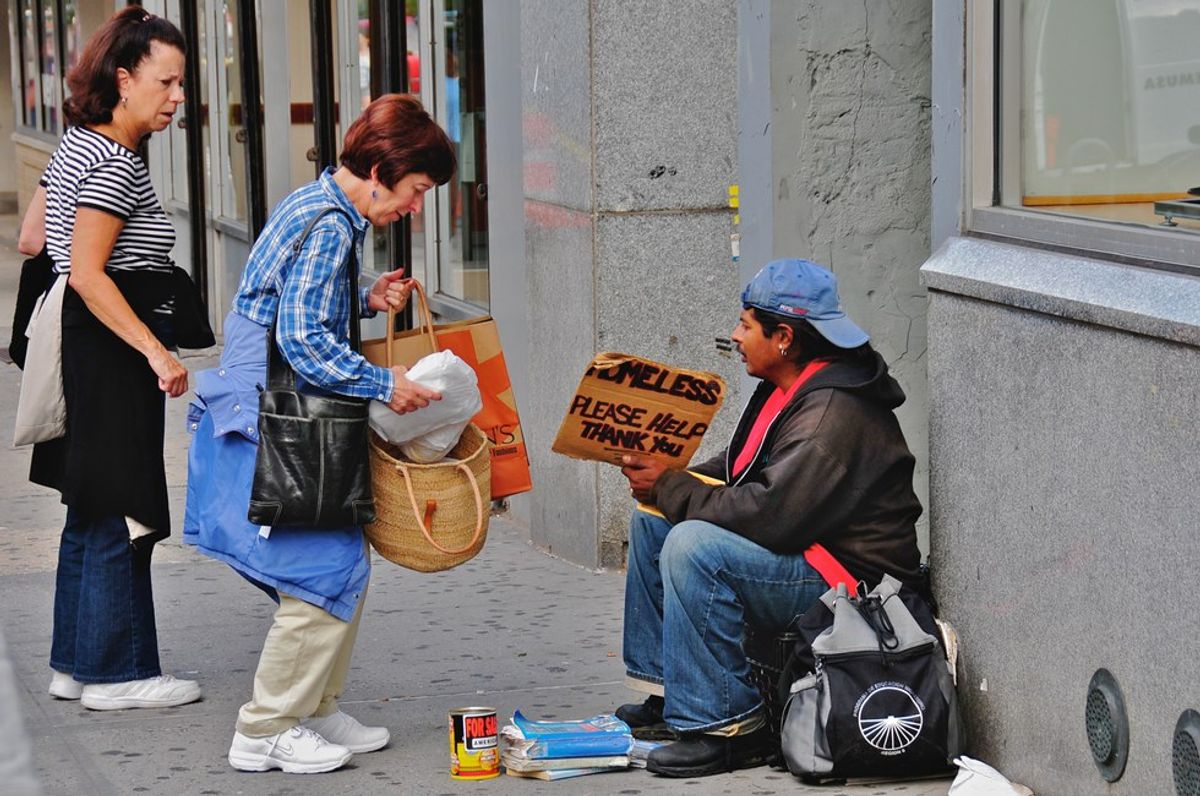 You're a stereotyper. There's no way to dodge the label and pretend you've never stereotyped another person, especially the homeless. Whether you volunteer at soup kitchens and give every person with a cup your spare change or you're the person who sneers at homeless people and mutters "get a job," most of us make the same mistake when we walk by a homeless person.

I used to ignore homeless people when I walked by them. I thought that it was polite to turn my head and not acknowledge someone when they were down on their luck. That was until I was the one sitting by the side of the road with a Styrofoam cup.

Let me add a little disclaimer: I wasn't really homeless. In association with Gettysburg College, I took the National Coalition for the Homeless's Homelessness Challenge. For forty-eight hours I lived on the streets of Washington D.C., sleeping on the concrete steps of a statue one night and on the sidewalk in front of a Macy's the next. Forty-eight hours is absolutely nothing compared to the length of time some people spend on the street, and I always knew in the back of my mind, no matter how thirsty or cold I was, I had a dorm room waiting for me when it was all over. I can't truly understand homelessness as a kid with a home to go back to, but I talked to countless homeless people during my trip, and I have based most of the opinions I've formed off of their stories. While the challenge really has no "rules" besides the mandate that you not tell anyone who isn't homeless that you're not homeless, panhandling is so strongly encouraged that it's nearly a rule. So, of course, I tried it.

I rolled up the sleeves of my mom's old jacket and plunged my hand into a public garbage can in the middle of the street. It was gross, I won't lie, but it seemed a lot less gross than I normally would have found it since my throat was crying out for just a sip of water. I dug out a Krispy Kreme box, tore off the top, and walked into the Krispy Kreme across the street. I asked for a cup and a pen, and the lady behind the counter obliged, looking me over with a combination of wariness and pity.

I tried a few different signs at the suggestions of homeless friends I made, but what the sign actually said didn't seem to make much of a difference. I sat near a bus stop in front of the Washington Monument, where I had a perfect view of the White House. I probably spent a little too long reflecting on the sort of poetic value of it.

The vast majority of people, probably a solid forty-nine out of every fifty, walked right by me. It wasn't just that they passed me; no one dared look at me. People would turn their heads at awkward angles just so they didn't have to acknowledge that I was sitting there.When people did stop, I'm pretty sure it was because I stood out. The majority of the homeless friends I made in D.C. were men, middle-aged or older. I saw only one homeless woman, and no children, because they often have to stay in shelters to avoid sexual harassment. So as a girl who'd turned eighteen just a few days prior, I stuck out like a sore thumb. Some of the friends I made said people stopped twice as often for me, but people only stopped for me maybe once an hour to give me a few cents or a dollar. I was sure that had to be the worst thing about homelessness. How could so few people, many of them clearly middle or upper class, not offer even a little of what they had to help? But I was wrong in that expectation. Every homeless person I met listed one thing as the absolute worst thing about being homeless: being ignored.

There is something utterly dehumanizing about everyone walking past you, making a concerted effort not to even look at you. No one said hello, or smiled, like they often did for other (presumably housed) people walking along the street. One friend described it as if the whole world had made an agreement to pretend you didn't even exist. It's hard to even describe how brutal it is, how frustrating, if even just for a few hours, for everyone on the planet to crane their necks so they don't have to see you.

I thought I was nice when I did the same thing, and I'm sure most people who avoid making eye contact with the homeless are probably just as well-intentioned. But good intentions mean nothing when you're leaving another human being on the side of a road or a sidewalk feeling like they are less than human. And why let that happen when you can help fix this with almost no effort? It's as easy as just saying hi.

To any homeless person you pass, look directly at them and say, "hey, how are you?" or "good morning." It's not the words that matter. It's the basic kindness of acknowledgment, which most of us take for granted. There are countless things that make homelessness so challenging and horrific, but this is one thing you can easily fix. We aren't all able to draft legislation or lead food drives, but this is one thing we can do to make people's lives just a little bit better.