Women Should Not Support Garrett Winning 'The Bachelorette'

Women Should Not Support Garrett Winning 'The Bachelorette,' And Not Just Because Of The Social Media Scandal

I respect his apology, but I don't respect Becca's decision. 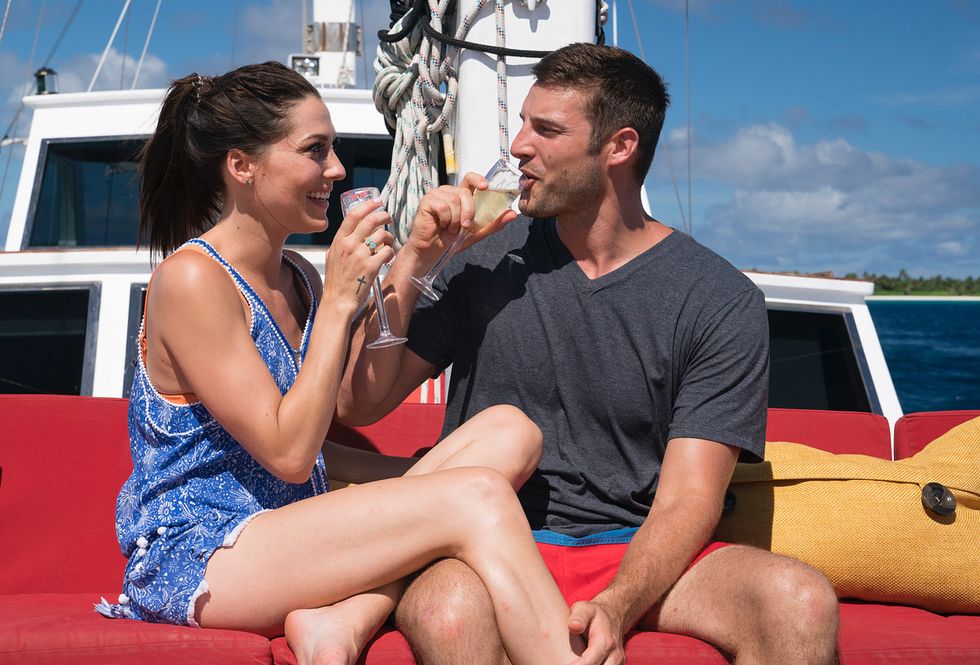 Millions of viewers across the United States watched the dramatic three-hour season finale of ABC's "The Bachelorette" on August 6.

Although the show has been criticized for its cheesy plot of a hopeful single finding lifelong love on a reality show, I have always been a loyal watcher of the intense moments and emotional heartbreaks, ignoring criticisms for the simple, lighthearted entertainment.

Every Monday night this summer, I sat on my couch, cuddled with my dog, waiting anxiously to see which handsome man received a rose from Becca Kufrin. I was so excited to find out who the bachelorette would choose as her fiancé in the final episode of season 14.

And, oh boy, I was definitely disappointed.

The final two men in the show, Blake Horstmann and Garrett Yrigoyen, wanted to win Becca's heart and get down on one knee in the end. And they both won her heart throughout the season. Becca repeatedly informed the cameras about her love for both men, so the viewers expected a dramatic ending that would undoubtedly leave one man heartbroken and the other on cloud nine.

I mean, it's "The Bachelorette," so it's supposed to be melodramatic and over the top and leave fans everywhere tweeting about which contestant should have received the final rose after the credits rolled.

I have watched this show for years, and I have disagreed with many outcomes on both "The Bachelor" and "The Bachelorette." But this time, there is absolutely no debate that Becca made the wrong choice with she accepted the proposal from Garrett.

Becca, a proclaimed feminist, became engaged to a man who has been reported to "like" multiple disrespectful social media posts that mock minorities. Garrett has liked posts that belittle feminists, members of the trans community, victims of the Parkland, Florida shooting, those who support kneeling for the flag, and liberals.

Now, my article in NO WAY discourages or bashes any certain political party or political views.

I am just simply here to state that Becca, who is outspoken about her feminist beliefs, obviously chose a man whose morals are very different from hers.

Viewers watched as Becca rejected Blake, a survivor of a high school shooting, who was seen sweating profusely from anxiety and crying heavily after not getting the chance to propose to the love of his life. At the live finale, Becca revealed that a reason for not choosing Blake was because he was always "in his head," and she was unsure of how he would handle difficult moments in their relationship.

But Becca, wouldn't you rather have a man who thinks through his emotions carefully instead of a guy who mocks everything you believe in?

Blake claimed to also view Becca as his equal partner, and he was attracted to how she is a strong and independent woman. In contrast, I can't tell you how many times Garrett discussed how he could see Becca as "a wife and a mom." Of course, there is nothing wrong with seeking a partner and envisioning having a family.

But I cannot express how annoying it was to see a heartbroken Blake go home for overthinking his relationship with his equal, while a disrespectful Garrett, lacking morals, could basically only envision Becca driving a minivan full of Garrett Juniors. Yeah, I'm disgusted, too.

Now, before you say, "Just because Garrett liked a bunch of offensive Instagram pictures doesn't mean he's an offensive guy," just stop trying to defend him. Yes, I know we've all double-tapped posts without really reading the entire message, but let's be real.

There are at least 10 verified posts that he liked that are offensive to multiple minorities. His actions were not a "mistake," and his intentions were evident because they, whether he is aware of this or not, reflect his morals. He obviously either agreed with the content in the posts, or he found their disrespectful nature humorous. I'm not sure which is worse.

Garrett deleted his social media and issued a public apology, and I commend him for that. Of course, everyone should be allowed to apologize for their actions, so I respect that. What I do NOT respect is ABC continuing to show Garrett as a good guy on national television by refusing to show the liked posts on the live show.

I do NOT respect Becca defending his actions as a simple way for the couple to "grow closer together." I, as a minority, accept Garrett's apology for his hurtful actions, but I will never accept that Becca has completely ignored female empowerment by rejecting a good guy and continuing an engagement with a guy who, as the show has revealed on and off camera, will never see her as his equal.

So, if you're a woman who enjoys watching "The Bachelorette" for the juicy gossip, intense suspense, and consistent entertainment... you shouldn't be entertained by this season's shocking finale. I wouldn't even define myself has your typical, outspoken feminist, and I like to stay away from most political conversations, but I have to say that I'm disappointed this season, as all women should be. If you respect yourself in any way, you should not be a member of #TeamGarrett.

Women should not support Garrett winning "The Bachelorette," and it's not JUST because of the scandal surrounding him liking certain posts. It's because the action of Becca choosing Garrett over BLAKE that exemplifies the exact OPPOSITE of female empowerment.

Becca, you can keep your privileged, ignorant fiancé to yourself. No one wants the last name Yrigoyen, anyway.

television streaming
Report this Content
This article has not been reviewed by Odyssey HQ and solely reflects the ideas and opinions of the creator.