As if you needed to read this to know. 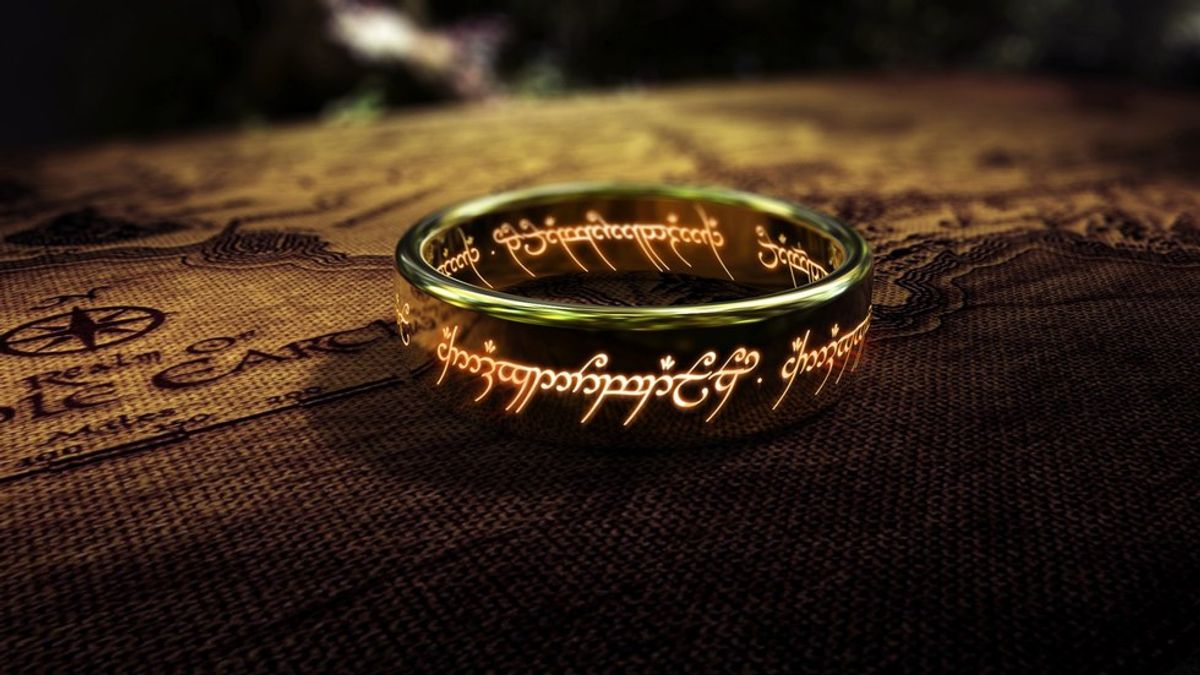 The Lord of the Rings film trilogy is based off the books written by J. R. R. Tolkien. They were adapted into movies, directed by Peter Jackson, in 2001. They begin with The Fellowship of the Ring, followed by The Two Towers, and Return of the King. Each film is about 3 hours long and follows the journey of Frodo Baggins as he attempts to destroy the ring that belonged to the Dark Lord Sauron. Despite the films being so lengthy, there is never a dull moment. These films have everything one could ever want in a movie; an awesome cast, great acting, amazing makeup and costumes, incredible filming locations in New Zeland, super cool creatures, and an intricate plot line involving romance, tragedy, suspense, friendship, loyalty, courage, fear, pain, loss, sadness, sacrifice, and love. No detail was overlooked in middle earth, as the world is so complete and so well thought out that you'll feel like you're in it. Tolkien even created the Elvish language that you hear spoken in the movies, and see the dialect Tengwar written on the ring of power.

The first film, The Fellowship of the Ring, begins in the Shire where you learn the story of the ring and are introduced to a hobbit named Frodo Baggins (Elijah Wood) and his hobbit friends Sam (Sean Austin), Merry (Dominic Monaghan), and Pippin (Billy Boyd), his uncle Bilbo Baggins (Ian Holm), and Gandalf the Gray (Ian McKellen). After discovering that Bilbo is still in possession of the ring, Gandalf reminds Bilbo to leave it in Bag End to be found by Frodo. Frodo must now take the ring to the fires of Mount Doom to destroy it. After a secret council meeting in Rivendell, he is then accompanied by, Aragorn (Viggo Mortensen), a dwarf named Gimli (John Rhys-Davies), and an elf named Legolas (Orlando Bloom). This film even features Sean Bean as Boromir, who many would know as Ned Stark on Game of Thrones. This single film in the trilogy was nominated for and won a huge amount of awards, not only in the US. Just some of these awards are the Academy Award for Best Cinematography, Best Makeup, Best Music, Original Score, Best Effects, Visual Effects, Best Picture, Best Actor in a Supporting Role, Best Director, and Best Writing, Based on Material Previously Produced or Published.

The journey to destroy the ring continues in the second film, The Two Towers. After a series of events in the conclusion of the first film, The Fellowship is forced to continue while separated. Mary and Pippin have been abducted by orcs, due to mistaken identity. They experience great loss when Gandalf falls into the depths of Moria while fighting a Balrog. Aragorn, Legolas, and Gimli are not without their own great struggles as they stick together while in pursuit of the orcs who abducted Mary and Pippin. The audience is also introduced to Aragorn's love, Arawin and the obstacles they must overcome to survive. Sam, the most loyal companion to Frodo, is still continuing their quest to the fires of Mount Doom. In this film we are introduced to a new character, Gollum, who embodies what can happen when you let the power of the ring consume you. He becomes Sam and Frodo's guide to Mordor. This film places more focus on the desire for power and how consuming of the mind it can be. The desire for power and the destruction of man ignites a battle in the end of the film between the Army of Isengard and of Rohan for the continuation of man, against the evil of Sauron. This film had another slew of award wins and nominations, including the Academy Awards for Best Sound Editing, Best Visual Effects, Best Picture, Best Art Direction-Set Decoration, Best Film Editing, and Best Sound.

The third and final movie, Return of the King, is the conclusion of the trilogy. This is probably the most action packed movie of the three, and ties up each plot line that has been introduced. Battles take place between men and men, orc and men, and even ghosts and men. We see more creatures, such as elephants, Nazgûls, and the witch King of Angmar. The characters' will and integrity are tested constantly throughout the film and keeps you on the edge of your seat until the very end. This film was not without its mass amounts of awards, along with the other two, including the Academy Awards for Best Picture, Best Director, Best Writing, Adapted Screenplay, Best Film Editing, Best Art Direction-Set Decoration, Best Costume Design, Best Makeup, Best Music, Original Score, Best Music, Original Song, Best Sound Mixing, and Best Visual Effects.

You have to watch this amazing trilogy to truly experience the world that J. R. R. Tolkien created so beautifully. So grab your snacks, silence your phone, and go to the bathroom beforehand because this'll be a long one, and get ready to go There and Back Again!