Rainbow Rowell's sequel to "Carry On" tackles the big question mark that follows the completion of a hero's prophesied journey and the struggle to process grief and trauma. No numpties this time, but watch out for the were-skunks. 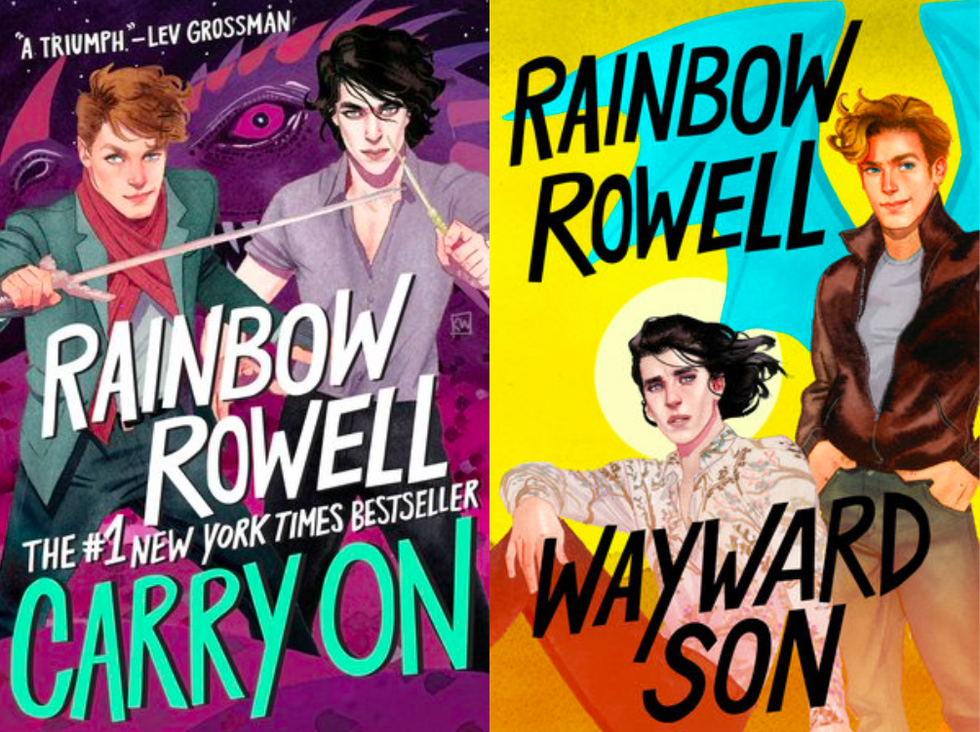 When "Carry On" came out, The New York Times Book Review called it "A powerful, politically minded allegory about sexual, ethnic, and class identity - with a heady shot of teenage lust."

The sequel, "Wayward Son" released September 24, 2019, several years after its predecessor, according to Rowell, wasn't planned for at the time of publication of "Carry On".

I can't quite say I was first in line to get this book, because the morning it came out, I drove thirty minutes to the closest Barnes and Noble to get it, and they hadn't even got it out on the shelves yet. There were stacks of copies on a desk in the back and I snuck one from the nearest pile. So yeah, I didn't have to slam down doors for it, but I was pretty adamant about getting a copy as soon as possible in whatever way I had to.

"Carry On" was everything other than what I was expecting. I picked it up last summer in a book shop in Port Angeles because the cover was beautiful. The synopsis was not my usual preference, but I gave it a chance on a whim. I do not regret it, and I am so grateful to Rainbow Rowell for centering a LGBTQA+ character who is hilarious and relatable and is just as capable of love and bravery as we all are.

Rowell is essentially taking the trope of "the chosen one" and turning it on its head. It's the current time of iPhones and internet, set in England at a magickal boarding school called Watford School of Magicks. Mages, or magicians, attend the school to learn how to use magick.

In "Carry On," the story actually begins after all the dragon-slaying and missions. Well, most of it. That was the first surprise. Simon Snow is, according to his enemy and roommate Baz, the worst chosen one ever to be chosen. It's not exactly true - he does slay a dragon and multitudes of other magickal creatures, and he's a master with a sword - but Simon also can barely ever get his wand to function properly, his girlfriend dumps him, and he's very slow to realize that Baz (who he suspects is a vampire despite years of eye-rolling from his best friend Penny) hasn't been stirring up hatred in him so much as . . . stirring up other feelings.

"Wayward Son" is tackling the question of . . . what now? What does the hero get up to when his life's purpose is fulfilled and he's unexpectedly survived it all?

Well, Simon ends up on the couch in his flat for endless months, completely depressed. His best friend and boyfriend are worried, but unsure how to help him. So when the opportunity comes up to fly across the pond and take a roadtrip across America to visit their school friend, they take it and drag him along.

Needless to say, chaos ensues. It's practically Simon Snow's middle name. Nothing goes right, and it's not just Simon that experiences the stress of what now? Penny, his best friend, painfully comes to the conclusion that not everything can be planned out, and she's not as right as she always thought she was. Baz, former roommate and current boyfriend, begins to come into his own suppressed identity (not in the way you're likely thinking), and yet is terrified of Simon's fragility and what it means for their relationship.

Something I endlessly appreciate about Rowell is her ability to write her character's understanding of themselves and their feelings as subtle and vague as we sometimes feel and understand ourselves. Simon has suffered massive trauma in his life, and he's spent all twenty or so years of it doing what was expected of him in the moment and refusing to think any further. He was sure he'd die eventually, seeing it unlikely that he would live beyond his Chosen One duties, so he never considers the future, or what he likes or doesn't like, or even who he is. It's all on the backburner, and then suddenly - he's survived it all, and people have died and he has to process it and keep going like everyone else.

"Wayward Son" was a huge reminder in many ways - about the cost of choices we make, even in good faith, about how we can always remember who we are by looking to the people closest to us, and especially about the importance of healing and the struggle to cope with loss.

Sequels are hard, but Rowell has produced a brilliant one. It opens with an epilogue and closes with a prologue. I have a million questions still. When the book ends, things are . . . unresolved, in a way that makes me uncomfortable as a typical reader of finalized endings. But it feels right, for these characters and the themes of the series. There's never a great place to close, to stop living. Life goes on, and we stumble right along with it, good or bad. Grief, love, and good ol' young adult existentialism is a lot to wrap up in a neat bow in only 354 pages. They haven't learned how to solve a single one of their problems, but perhaps they're a step closer to figuring it out.

Whether there is a book to follow or not, it's clear that, despite all signs pointing to the contrary for twenty years, Simon Snow's story isn't over.

entertainment
Report this Content
This article has not been reviewed by Odyssey HQ and solely reflects the ideas and opinions of the creator.