In 2017, Trump Told Police Officers 'Don't Be Too Nice' During Arrests, And Now George Floyd Is Dead

What happened to innocent until proven guilty? 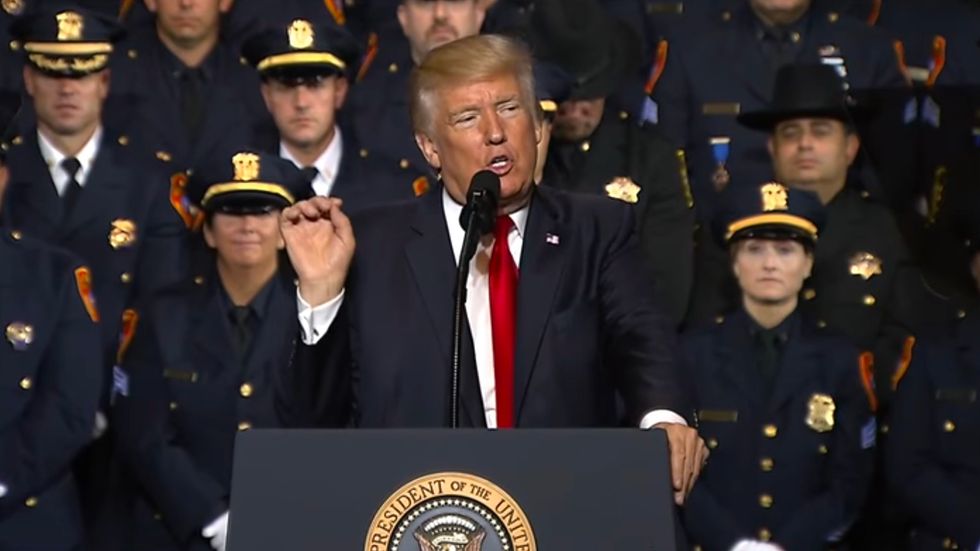 Are we seriously going to stand here and act like what we have just witnessed is OK?

Are we seriously going to remain silent when we are seeing people die at the hands of law enforcement?

Let's backtrack for a second to 2017 when President Donald Trump made a statement encouraging police officers to be aggressive with people they were arresting.

Trump says, "... like 'don't hit their head,' and they've just killed somebody?"

That's an incredibly dangerous mindset that Trump has just set up within law enforcement. It puts the power in the hands of the police to determine if someone is guilty or not. Trump's statement assumes that the police are right 100 percent of the time, and we all know, regardless of politics, that it's just not true.

If you don't, the Central Park Five were five African American and Hispanic young men between the ages of 14 and 16 who were wrongly convicted of raping and beating Trisha Meili. At the time, no DNA evidence pointed to the boys, and the case heavily relied on the boys' confessions, confessions that would later be put on record as coerced.

The Central Park Five would go on to serve sentences that ranged from six years to 13 years when new evidence finally emerged in 2002. The new evidence, as well as a confession from Matias Reyes, exonerated the innocent boys.

So what does Trump have to do with the Central Park Five? Everything.

See, at the time, Trump was very outspoken that the Central Park Five were guilty.

In fact, Trump reportedly spent $85,000 at the time to run four full-page advertisements with the words: "Bring Back The Death Penalty, Bring Back Our Police!"

He was also cited as writing, "I hate these murderers and I always will. I am not looking to psychoanalyze or understand them, I am looking to punish them."

He also interviewed with CNN at the time stating, "Maybe hate is what we need if we're gonna get something done." His comments fed into the high crime and poor race relations of the time.

With all of that being said, shouldn't Trump understand the dangerous nature of calling someone guilty and enforcing brutality before we have the entire story?

He, himself, was wrong about a crime and wrongfully stated that the Central Park Five were guilty. By his logic, because he thought they were guilty, it was OK to treat them violently.

To him, it's OK to treat people as less than people before we even know the entire story.

I have something to say to you, Mr. President: you're not the judicial system, and neither are cops. It's not your job or their job to determine if they're guilty and treat them in a violent or nasty way.

If they're truly guilty, they'll find themselves behind bars soon enough with the proper punishment in place. You do your job, and the judges and juries of the world will do theirs.

Now, because of your encouragement as the leader of the land, people are finding themselves the victims of police brutality and being sentenced to death by the cops without a fair trial.

And that reality becomes even worse if you're African American.

Police brutality is one of the leading causes of death for young African American men in America, and it's actually two-and-a-half times more likely that an African American will be killed than a white peer.

This isn't to say it's not tragic when an innocent white man dies at the hands of a police officer. Any innocent life taken by law enforcement taking a judge's job into their own hands is tragic and disgusting. But to know that someone's skin color puts them at an even higher risk, especially in Trump's America where race relations are perceived at an all-time low, it's terrifying.

It's terrifying that my African American friends have to fear just being out on the street because someone may "think they look like a bad guy they saw on TV and shoot them."

It's terrifying that someone who appears to be following police orders has a police officer put his knee on his neck while three other officers did nothing to stop it. This move by police cost George Floyd his life.

Trump's 2017 statement goes so much deeper than most realize. This isn't about him tweeting something he probably shouldn't have, this is about the leader of our country encouraging police brutality in an era where it's on the rise. This is about the countless lives that have been lost because police have deemed it their jurisdiction to determine if someone is innocent or guilty.

This isn't OK, and we shouldn't be OK with this.

When our president's favorite sheriff has publicly taken pride in the fact that he treats his prisoners like they're in a concentration camp, we have a problem. A big problem.

In fact, Mr. President, I hope you're listening to this. I hope you hear me when I say this: I volunteered with ex-convicts before, and it doesn't mean they're bad people. I volunteered next to people who had stories, who made some wrong turns, but who were people at the end of the day.

In your book, Mr. President, it's guilty until proven innocent, and that's not OK.

In your book, it's OK to judge based on your own, personal opinion whether or not someone is guilty, but as you should know, you were wrong about the Central Park Five, so who's to say that the police always know the whole story either at the time they're arriving?

We need to demand better because if it was your loved one on the other end of this, something tells me you'd stand up, too.

Lawsuits are piling up in the wake of the massive data breach.

Two class-action lawsuits have been filed against T-Mobile in the wake of a massive data breach that left millions of customers' personal information exposed.