Trump Knew The Coronavirus Was Deadly in January, His Decision To 'Play It Down' Cost 191,000 Lives

Trump divulged the reality of the virus to Bob Woodward as he denied its severity to the American public. 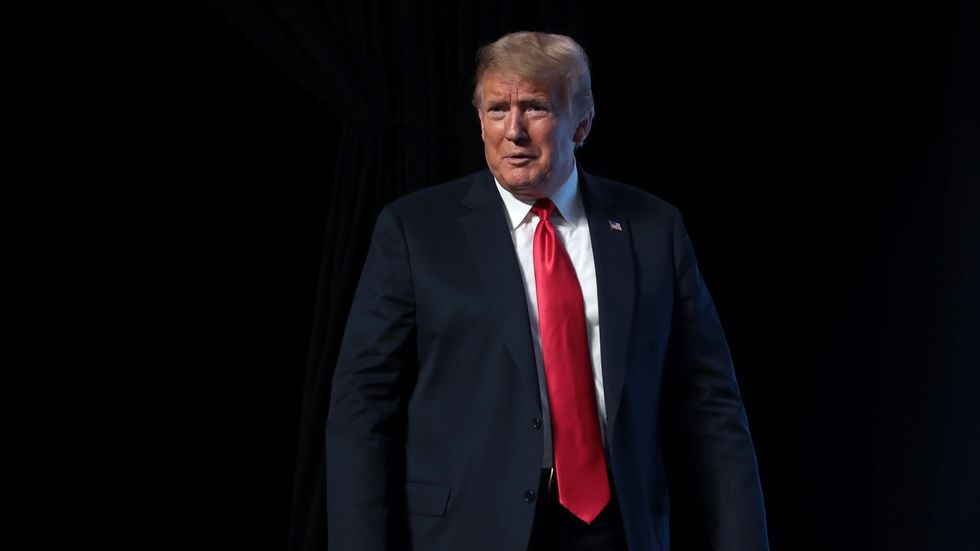 In a series of interviews for Bob Woodward's book "Rage," Donald Trump admitted on tape he knew how deadly the coronavirus (COVID-19) was as early as February.

Trump was told by National Security advisor Robert O'Brien on January 28 that the COVID-19 would be the "biggest national security threat" of his presidency.

Matt Pottinger, the deputy national security advisor, compared it to the 1918 flu pandemic and warned Trump that 50 percent of people in China were asymptomatic. Trump first told Woodward he did not remember hearing O'Brien say that, but later said, "you know, I'm sure he said it."

Trump told Woodward on February 7 "[COVID-19] is deadly stuff." He went on to reveal what Chinese President Xi Jinping had told him on a phone call the night before: "It goes through the air," Trump said. "That's always tougher than the touch. You don't have to touch things. Right? But the air, you just breathe the air and that's how it's passed. And so that's a very tricky one. That's a very delicate one. It's also more deadly than even your strenuous flus."

On Twitter that same day, the president told a different story about the phone call that took place. "Just had a long and very good conversation by phone with president Xi of China," Trump tweeted. "Nothing is easy, but... he will be successful, especially as the weather starts to warm & the virus hopefully becomes weaker, and then gone."

This means that by February 7, Trump knew that COVID-19 was going to cause a national emergency, has high rates of asymptomatic spread, is airborne, and is more deadly than the flu. He chose not to do anything besides place a travel restriction on China.

Trump continued to downplay the virus in public throughout February and early March, missing a crucial time period to implement prevention measures.

Even after Trump had told Woodward that this virus was more deadly than some flu strains, the president publicly compared the two in an attempt to calm the American public. During a COVID-19 task force press briefing at the White House on February 26, Trump said, "The flu, in our country, kills from 25,000 people to 69,000 people a year. That was shocking to me. And, so far, if you look at what we have with the 15 people and their recovery, one is — one is pretty sick but hopefully will recover, but the others are in great shape. But think of that – 25,000 to 69,000."

These comparisons to the flu were an attempt to calm the American public by misleading them about the virus's effects and potential infection rate. This false sense of security during the virus's onset in the American populace prevented earlier implementations of mask requirements, social distancing, and local shelter-in-place orders.

It was not until mid-March that these measures started to go into place. Even then, Trump told Woodward on March 19, "I wanted to always play it down. I still like playing it down, because I don't want to create a panic."

These comments came in the wake of his declaration of a national emergency just six days earlier on March 13. That was the day when students were being forced out of their college dorm rooms, schools closed down, offices switched to all-remote work, and businesses shuttered as shelter-in-place orders started to roll out across the country. Yet, the president still decided to conceal the severity of this virus from the American public as more and more citizens became infected.

Donald Trump's inaction on the COVID-19 prevented effective safeguards from being put in place.

Donald Trump knew the deadly potential of this virus and its high infection rate as early as February and chose to downplay it for his own political wellbeing instead of saving hundreds of thousands of American lives. According to Woodward, Dr. Fauci said of Trump's initial response to the COVID-19: "His sole purpose is to get reelected."

Instead of launching into action in early February to ensure that the U.S. had an effective testing plan in place and was building stockpiles of medical equipment for an inevitable outbreak, he chose to play the waiting game. Donald Trump denies saying these things to Woodward, but there are audiotapes of the 18 interviews Trump gave to Woodward between December 5, 2019 and July 21, 2020.

Trump's decision to deny his comments comes from a place of deep shame for being held accountable for his inaction in the face of what he knew was going to be a massive deadly outbreak of historic proportions.

191,000 Americans (and counting) have died from a national outbreak that was preventable.

Six million Americans have been infected by this virus with no knowledge of the long-term, potentially chronic effects of the illness.

It did not have to get to this point.