The Girl Without A Guidebook: Part 7
Odyssey
CurrentlySwoonLifestyleHealth & WellnessStudent LifeContent InspirationEntertainmentPolitics and ActivismSportsAdulting
About usAdvertiseTermsPrivacyDMCAContact us
® 2023 ODYSSEY
Welcome back
Sign in to comment to your favorite stories, participate in your community and interact with your friends
or
LOG IN WITH FACEBOOK
No account? Create one
Start writing a post
Politics and Activism

The Girl Without A Guidebook: Part 7 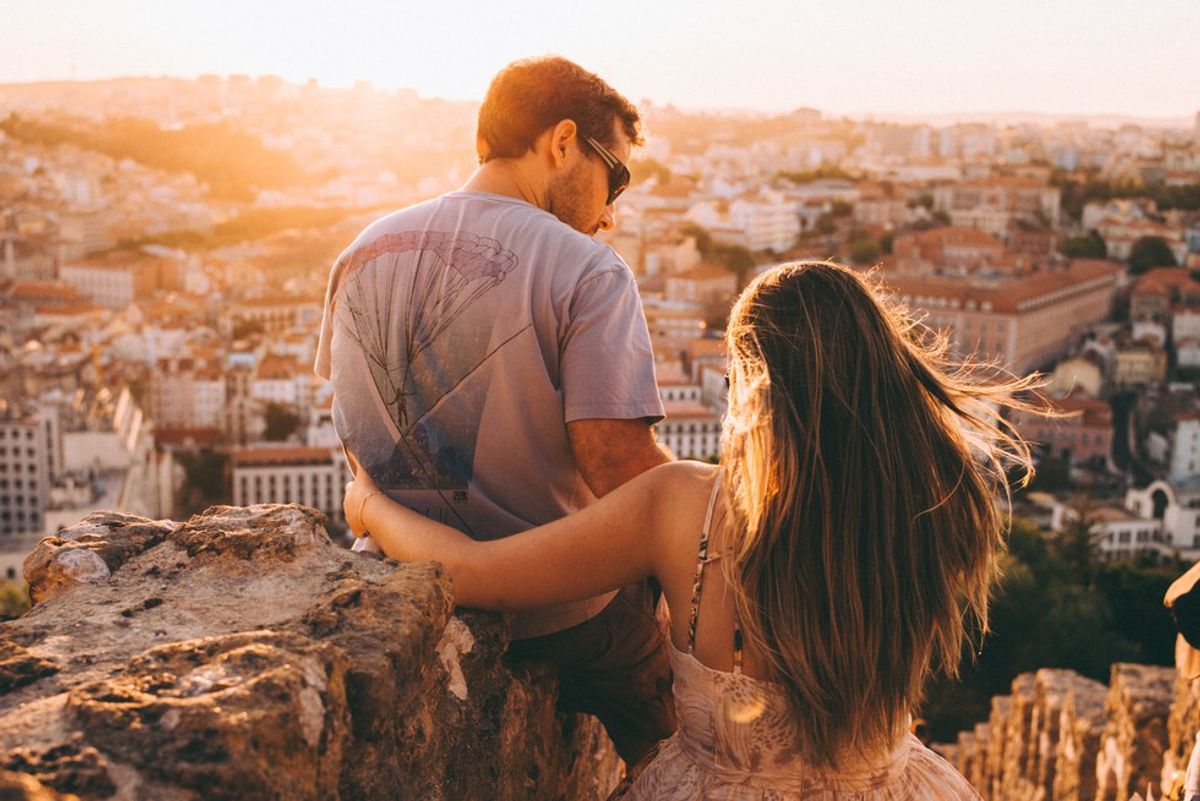 My mother always says that public displays of affection are only appropriate under two circumstances: at airports and at weddings. At airports, you are either saying goodbye to or welcoming back a loved one and a romantic embrace is absolutely in order to commemorate the occasion. At weddings, only the bride and groom may kiss following their pledge of undying love to one another; no bridesmaids on the dance floor are allowed to do the same. Both are understandably appropriate circumstances for expressing your affection openly.

I’ve spent my adult life living by this conscience. I’m not a proponent of PDA at all. I believe that when you openly flaunt your relationship with passionate make out sessions in places like the line for breakfast at McDonald’s (I’ve witnessed this but, because I am who I am, still had an appetite) or practically mount each other on public transportation (if I had a dime for every time I’ve seen this, I wouldn’t be taking public transportation), you’re not only showing off your relationship, but also trying to prove something deeper to yourself. I understand that for some, their love language is physical affection, but there is a thin line between what constitutes socially acceptable physical affection and physical affection that serves a better purpose in the bedroom.

In my time abroad, I’ve found myself exposed to even more public affection than I ever have in my 21 years. It seems that across Europe, PDA is just a normal part of everyday life. There is no limit on how much is too much when it comes to being openly affectionate with your significant other, anytime or anywhere. Even flirtation takes on a whole new meaning in Europe. In my experience, men have not hesitated to approach my friends and me at a pub and carry out a conversation, even when we seem thoroughly disinterested. They’ll use corny pickup lines or buy you a drink, just in the hopes of snagging your number at the end of the night. However, I’ve seen some pretty extraordinary displays during my time in London that have really shown to me that my reserved tendencies are apparently a bit old-fashioned and I’m really behind the times on what’s considered alright for couples to do in public.

The other day, I was riding the Tube when a couple sat down across from me. They were an attractive young couple dressed up for some special occasion and I glanced upward at them for a mere second before I returned to aimlessly tooling around on my phone—when something caught my eye. Now, I realize that every couple works differently and has their own comfort levels, but what I witnessed between this couple, first off, does not exactly qualify as a display of “affection,” and crosses every line of etiquette ever posed:

The young woman in this relationship popped a pimple of her boyfriend’s nose in the middle of rush hour on the Tube.

I was the only one who seemed to have noticed this horrifying exchange. Everyone else went about reading or listening to music or rustling the pages of their London Metro newspaper. I must’ve sat there with my jaw to the floor for a solid 15 minutes and even in the hours after, I couldn’t touch my own face because the image of the atrocity I had witnessed on my commute home was too much to bear.

The reason I share this story is not to physically revolt you and turn you away from reading the rest of this article, but to put into perspective the stark difference that exists between what I, as an ignorant American, consider to be socially acceptable, and this example of inter-couple relations in a foreign country. This is truly an extreme example, but across Europe, extreme displays are not uncommon. In Berlin, I saw a young couple make out on the subway for a solid 45 minutes without once coming up for air. In Italy, a meal was not complete without seeing a pair of lovers cuddled up with one another, their exchange more steamy than the plates of pasta in front of them. In Ireland, an affectionate duo getting lucky in the land of the Leprechaun was a regular occurrence in my 48-hour trip. My idea of saving PDA for airports and engagements is, according to European standards, antiquated and ultra-conservative.

We should probably address the elephant in the room that, given my single state, there may be some jealousy fueling my distaste towards these grand displays I see in my everyday life abroad. Sure, there’s a lot of physical affection, but there’s also the men toting bouquets of beautiful flowers on their way home from work, or the tourist couple snapping selfies in front of famous monuments. It’s simple occurrences like these that thaw my icy heart and make me consider for a moment that just maybe, it’d be nice to have some romantic companionship. It’s only a moment that I consider this before I find myself stuck behind some lazily traipsing couple with their arms interlinked who have decided to occupy the entire sidewalk with their love, and I find myself bitter and alone once again.

There’s been so much in my time abroad to which I’ve had to adjust but arguably, the openly public displays of affection have been one of the largest adjustments I’ve had to make. I’ve just grown up with the mindset that affection is best saved for the bedroom and while I realize that’s old fashioned of me, I’m just not entirely comfortable with the notion of loving up my significant other in front of total strangers. I think, however, my having to come to terms with European standards for coupling in public speaks to a large experience of my time abroad.

I didn’t grow up sheltered by any means, but understanding that PDA is okay in foreign countries is one of many global lessons, you might say, I’ve learned in my time abroad. Studying abroad is about experiencing a different side of life you wouldn’t normally encounter in the small corner of the world you inhabit when you’re home. You’re supposed to be uncomfortable. You’re supposed to be unsure. It’s all a part of growing up and realizing that while the world is big and scary, you’re capable of understanding and experiencing it a lot better than you might think.

No moment of my study abroad experience has been without its hitches, from cancelled flights out of Munich to being stranded in Venice, but I know that it’s all just meant to help me grow as a person and mold into a somewhat sustainable member of society. I might all too often find myself lost in understanding how life works outside of the tiny sphere I occupy back home, but I believe that even having to witness a couple pop each other’s pimples on the Tube is in some universe meant to help this girl without a guidebook find her way.

Nicole Marie Nigro
Individual Creator
8631
c1.staticflickr.com
Where to start...... Let me start with the cliche that life throws us curveballs and what we do with it is what counts.