A fun new way to write! 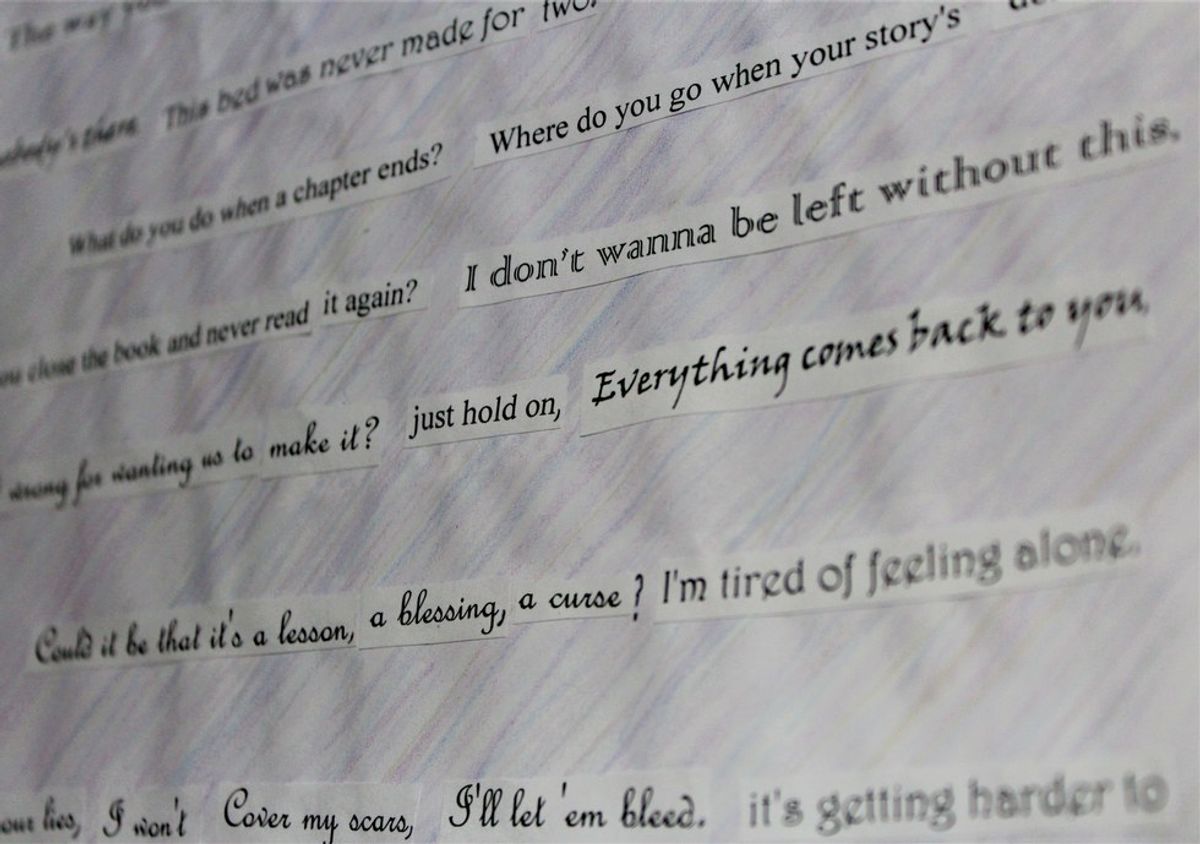 Upon looking at the title of this piece, as well as the name of this technique, any person familiar with the English language would be able to guess what the cut-up method is. As the title suggests, this way of writing consists of taking lines or words from numerous preexisting pieces, whether they be novels, poems, magazine articles, song lyrics, children's books, or a mix, and rearranging them to create a new story. It's a really fun way to take some of your favorite texts and twist them into your own style.

Although this style can be traced back to the 1920s, it grew in popularity in the late 1950s and early 1960s because of William Burroughs, who was a writer himself. Since then, the cut-up method has been used by numerous poets, writers, artists, and even some music groups. It is believed that artists like David Bowie, Kurt Cobain, and Thom York used this technique and ones similar to create some of their albums. One of my favorite One Direction songs called, "Better Than Words," is also thought to use something similar. Below is a picture of a stack of records, but if you're familiar with the 1D song, you'll recognize that when read in order, those record titles lay out the lyrics of "Better Than Words!"

On the first day of my spring semester, I attended an English class in which we were assigned the homework of creating our own cut-up piece. We could use anything we wanted to make our masterpiece, so, inspired by the One Direction song, I decided to use song lyrics from one solo song by each of the One Direction guys. Some of those songs have been officially released and can be bought on iTunes, one of them was a demo that was leaked, and one was a 60-second teaser to an upcoming single. Nevertheless, I found the lyrics to all of these songs, sat down with them all spread out in front of me, and got to work. This is the finished product:

I saw in the corner there is a photograph

from when we were the children playing in this fairground.

I promised one day I'd bring you back a star,

wish I was there with you now.

I didn't think that I'd ever find someone

in this old town.

Seems like these days I watch you from afar,

The way you walk in here's so different.

Waking up to kiss you and nobody's there—

this bed we never made for two.

What do you do when a chapter ends?

Where do you go when your story's done?

Do you close the book and never read it again?

I don't wanna be left without this.

Am I wrong for wanting us to make it?

everything comes back to you.

Could it be that it's a lesson,

Tell me your lies,

It's getting harder to breath

because I just can't face it.

It's not over 'til it's all been said

and I promise I'ma make it right.

'Cause if the whole world was watching I'd still dance with you.

You still make me nervous when you walk in the room,

standing there right in front of me

I just wanna make it with you,

and I know that it's wrong,

but there's something 'bout you.

I don't know why

everything comes back to you.

if it all goes wrong,

Can you guess what songs I used? Could you follow my story? Each line is cut from one of those five songs and rearranged into what you just read. These things are so fun to make!!! This way of writing is all about taking text that already exists and turning it into something all your own! Whether you turn it into a poem like mine, a song like One Direction did, or even a novel if you're feeling adventurous, there are no creative limits.

My challenge to you is to try and make one of these cut-up pieces! Pick a few pieces of writing or even songs that stick out to you and spend some time mashing them together to create something awesome. I'll warn you now: once you get started, you'll never want to stop! Have fun!

"This Town" by Niall Horan

"It's You" by Zayn Malik

"Just Hold On" by Louis Tomlinson and Steve Aoki

"Make it With You" by Liam Payne