But who was surprised? Certainly not me. 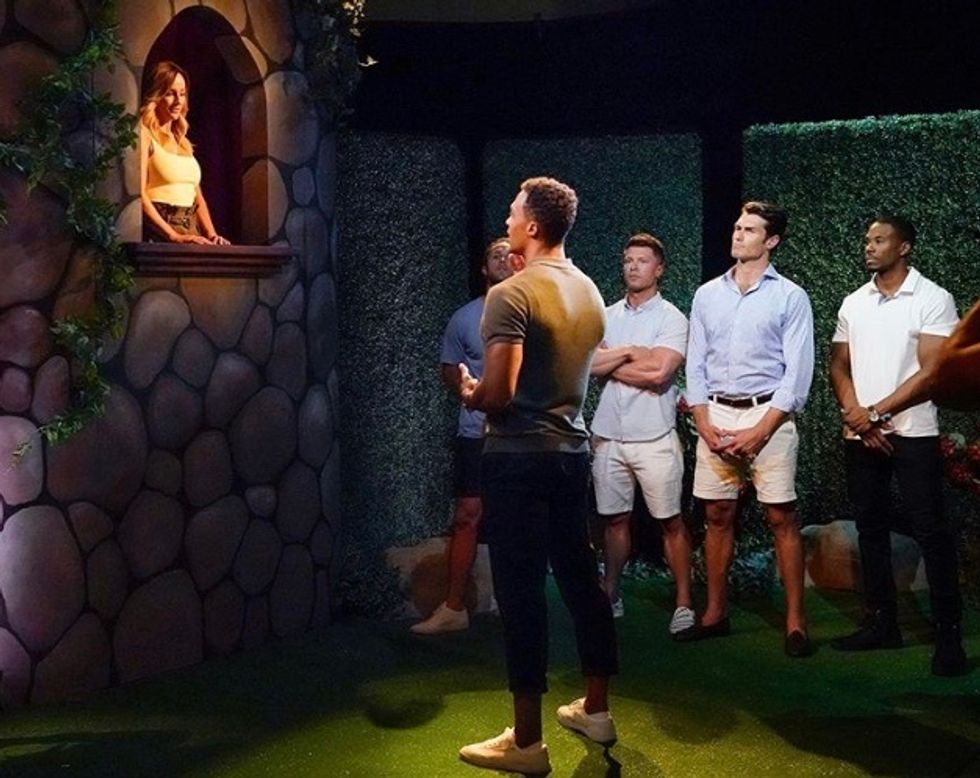 As I mentioned last week, Clare is already so obsessed with Dale.

As the men in the show so eloquently put this week, she has tunnel vision. Even throughout her time with other men, she only talks about Dale and mentions how she just wishes she could be with him. Not cool, dude. Let's jump into it, shall we? (Or as Chris Harrison says before he seals the deal, "Let the journey begin.)

Week 2 started off with an absolutely adorable love language date, where they spoke words of affirmation, gave gifts, got saucy with some physical touch, and spent some quality time together.

I loved the idea of this date. In the Bachelor Bubble, date ideas are kind of tough to

come by, but this was really sweet.

You could just tell Clare wishes there was no one else in the room with them as she and Dale did their physical touch. His declaration for her during words of affirmation fell so short compared to everyone else's, but she still ate it up. Sure Dale's handsome, but I don't know how she knows so fast. When you know you know, I guess, but still. Respect the process.

All went well until the afterparty when no one jumped to go talk with her alone. Have they never seen the Bachelor show before? Come on. That was bad on the men. I guess they may not have known because it was group date number one, but still.

I feel like the way Clare talks with Dale it's like she's on his season of the Bachelor, no joke.

Riley stood out to me on this date. His slow dancing with Clare was sweet.

I thought the one-on-one with Jason was interesting. He was really trying to open up with Clare, and I could see that. I like him.

I thought the strip dodgeball game was typical Bachelor stuff. Why Yosef got so upset, that's on him I guess. I get where he's coming from but he doesn't need to belittle every little thing and speak so aggressively.

Also, the guys got so upset Blake came back to talk with Clare because he lost fair and square. They really valued the sports aspect of it way more than they did Clare in that situation and it didn't sit well with me. And then he goes and gets a rose before the ceremony starts? Awkkkwarddd.

Week 3 is the obvious downturn of Clare's experience as the Bachelorette. I was very unhappy with the way she carried herself in this episode. I can tell a lot of what we saw has been so heavily edited, and Clare's been shady on Twitter by liking tweets about how edited this season is, but still. These darn contracts.

However, I'm thrilled that Yosef went home. You can't talk to any woman like the way

he did. Justice for Tyler C.

Dale very clearly knew where the bathroom was during the second quality time date. He trying to say that he didn't know where he was going after he made out with Clare for an entire hour before anyone else got a chance to talk to her and then stumbling back in because he was "lost?" Come on.

The spa one on one date with Zach J was tough. The whole thing. I'm sure it was edited to make it look super awkward, but I feel like you can't fake this. Then the kiss, oh god, the kiss. To me it really looked like Clare pulled away, not Zach, and then his recovery was just hard to watch, just as much as it was unsuccessful. I get why Clare felt uncomfortable here, I really do, but I do think she's really trying to find a reason to dislike every guy she goes on a date with that's not Dale. And the way she stood him up and Chris Harrison had to tell him he's going home? Tough. The poor guy hardly even had a chance.

Speaking of trying not to like anyone, she really didn't give out a rose at the second

I'm really shook that happened, but also not really, as when you delve into the meat of the date, it was still focused on Dale! And he wasn't even on the date! He was there, in the audience as the other guys did stand-up comedy roast routines, but he wasn't even technically on the date! The guys were ripping Dale apart in their comedy sketches. Bennett especially, except he was more calling him out and not even making it funny. I'm sure the material about the other guys was great, but I'm sure the show cut it out.

I was very upset with this date because the men all put themselves out there, really went out of their comfort zones, and in every conversation with them afterward, she only wanted to talk about Dale. I thought this was very disrespectful of her, as the men all wanted to actually talk with her instead of gossip about Dale, but that's all she wanted to do was talk about him. Not shaping up to be a very good bachelorette.

I'm very excited to watch everything fall apart these next two weeks. My next update will be a juicy one, I can promise you that. Until then, have a great couple of weeks, & see you after the Bachelorette blows up!