Stop Sleeping On 'Atlanta,' Because Donald Glover Has Something To Say

How its style and substance make it the best show you probably haven't seen. 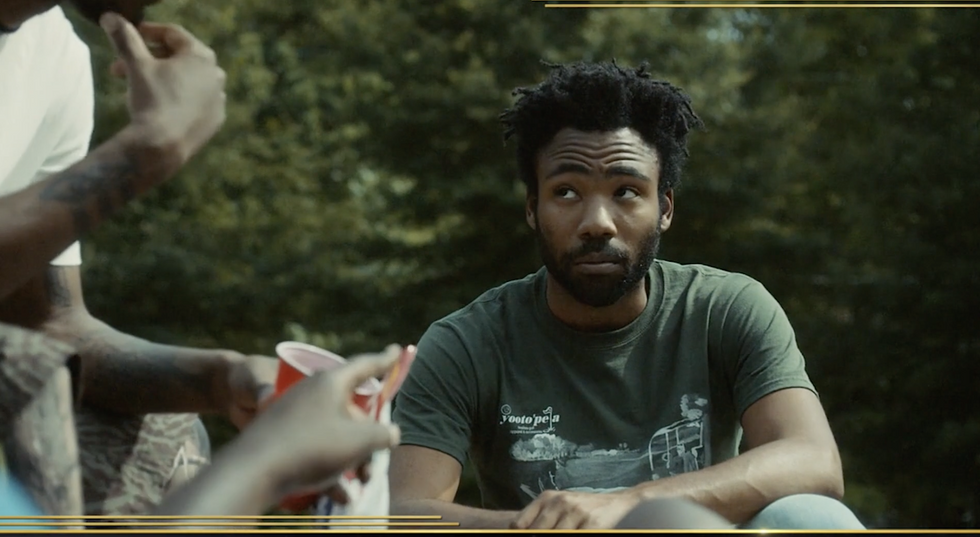 Do you ever procrastinate about watching a show? Maybe you've heard how great it is, or maybe you caught part of an episode and were drawn in, but you're reluctant to commit. In truth, it's a big decision. You have to prepare for the worst. And by the worst I mean you have to be ready for it to be great, in which case you'll sacrifice about 90% of your free time for the next several days to weeks (depending on your binging stamina) in trance-like communion with its glory. I do this all the time.

With "Game of Thrones," the "The Wire," and "Breaking Bad," I managed to put off watching week-to-week like so many fans only to have these small screen masterpieces completely dictate my waking hours when I finally succumbed to their hype. I say with a sense of pride I took down the first six seasons of GoT in about two weeks, the five seasons of the Wire even quicker (please, save your applause for the end). And once again this behavior has reared its beautifully ugly head with "Atlanta", which single-handedly, and with full consent, has ruined my sleep schedule just in time for classes to begin after spring break.

"Atlanta" was conceived by Donald Glover and follows an identity-seeking, ivy-league educated, dead-end-job-having father living in the eponymous city who lands a gig as manager for his cousin and up-and-coming rapper Alfred, a.k.a Paper Boi (Brian Tyree Henry). At face value, it's reminiscent of "Entourage", another binge-worthy series, in that it focuses on a close-knit group of friends and family as they traverse the transition from normalcy to stardom.

There's the rising celebrity, the novice manager, the quirky yet endearing posse, and all the pitfalls of the dog-eat-dog world of entertainment. Yet while "Atlanta" maintains a similar balance between comedy, drama, love, and tension as the former, its utilization of stark realism interwoven with touches of head-scratching absurdity elevate it onto a level of its own.

Inherent to the show, as should be expected by the title, is its treatment of race. Frequently encountered by Glover's character, Earnest "Earn" Marks, Alfred, and their friends are the sometimes casual, sometimes blatant, but all too entrenched racism of today's society. At times I thought some of these situations were unrealistic or part of the unspoken surrealism punctuating the plot. But then again, I have no frame of reference.

My upbringing in Atlanta suburbs was so obscenely insulated from the experiences of the show's characters that it's not my place to say what is real or what is exaggerated. The show reflects, club VIP sections and celeb charity events aside, a reality lived by many. But it's a world I don't know. A world a lot of us don't. I think this idea formed part of my reluctance in watching the series. It seemed somewhat unrelatable, like an alien depiction of my "hometown" that I couldn't comprehend. And in some regards, that is what it is. But while the setting and plot may be foreign to my privileged background, I was still completely entranced. "Atlanta" exudes so much self-awareness, so much confidence, and so much depth that it creates a universality intriguing to anyone that gives it a shot.

Through the show's truthful writing and expert cinematography (kudos especially to Hiro Murai, also director of Glover's "This is America" video), it transcends its sectarian dimension to promote both understandings from those who know and self-reflection from those who don't…not to mention insanely entertaining and endlessly surprising television.

As I've alluded to, Donald and Stephen Glover, Jamal Olori, Ibra Ake, Taofik Kolade, and the other series writers go beyond accurate storytelling to further fascinate their audience. From the bizarre introduction to Migos, to Marcus Miles' invisible car, to the Juneteenth fiasco, to Kat Williams' Emmy-winning guest appearance, to the hauntingly memorable Teddy Perkins, to the Mirkwood-esque scene (shout-out to "The Hobbit") of Alfred wandering the woods, the writers introduce and sustain a sense of unpredictability that sets "Atlanta" apart from really any other show I've seen. While the multi-layered plot is more than enough to be exciting, these recurring, surrealist interludes are the cherry on top.

They speak to the breadth of creativity explored by the show and are reminiscent of other thought-provoking, wildly interesting works like "True Detective," "Get Out," or "Sorry to Bother You" (which of course stars Lakeith Stanfield who plays Alfred's closest confidante, Darius, in "Atlanta"). Such nuances serve to make the main plot of interlocking relationships that much more enjoyable. You're tied ever closer to the protagonists and, almost immediately, are in awe of its style, which is more in tune with a Sundance winner than an FX dramedy.

In sum, watch the show. Let this be the tipping point for those who've heard about it but are procrastinating full devotion. Let this be the first call to those who haven't. You will be captivated, and I mean that as literally as possible. But it's worth it. Donald Glover has proven time and again through his lyricism as Childish Gambino and his vision as a writer/director/star of "Atlanta" that he not only has a voice, but he also has something to say. I for one, enjoy listening.