Here's to you, smile buddy 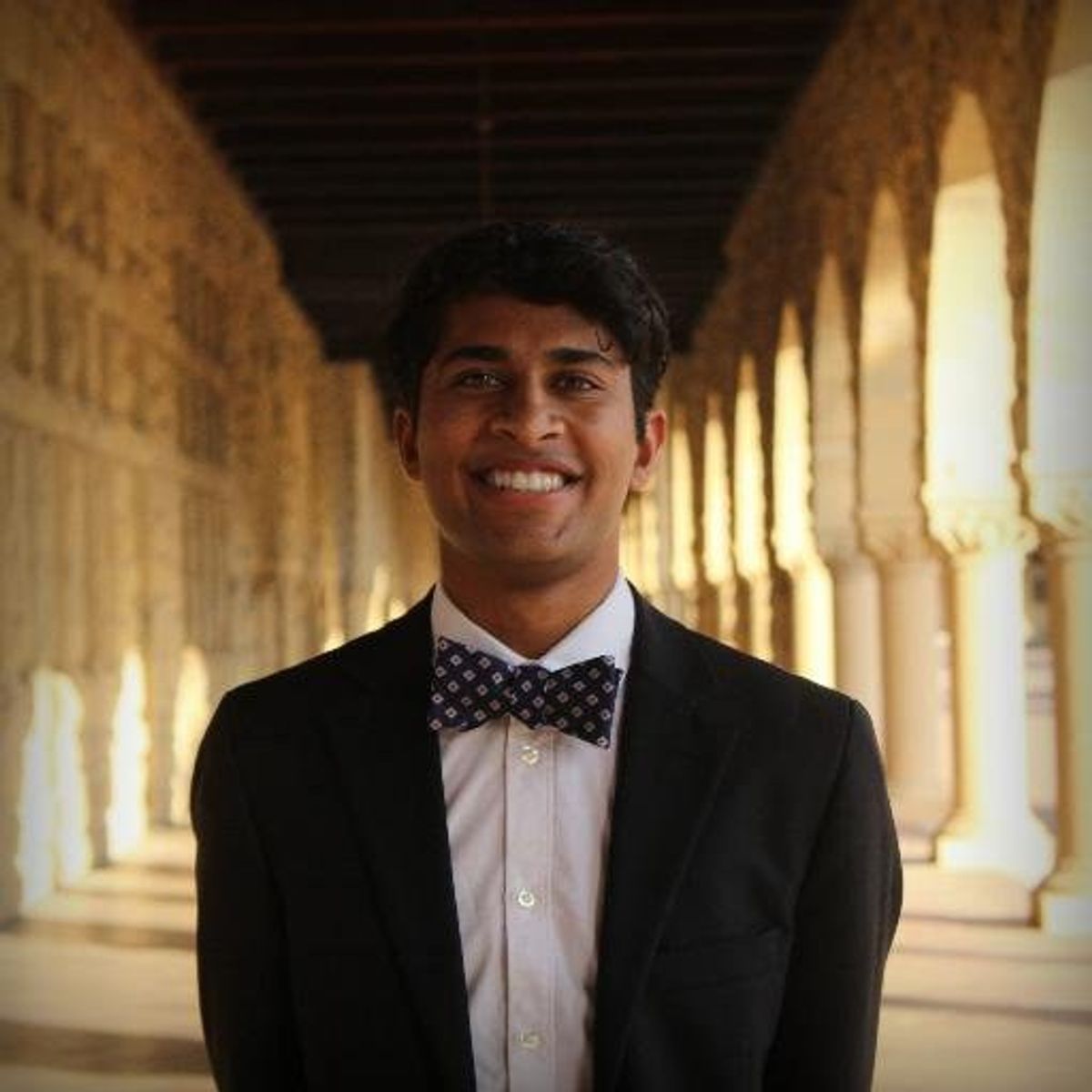 In this world of Stanford, where success is measured on a Silicon Valley scale, it’s important to recognize different metrics of fulfillment. There is such an emphasis on tech (cough, cough – CS) that it is especially interesting to me when people come up with their own ways to shine. Such is the case with Akshay. He is loved in our dorm for bringing happiness to Stanford every single day. Without him, my freshman experience would be dramatically different. I want to not only thank him, but also to demonstrate what it’s like to be successful at Stanford without necessarily pulling a 4.0 or writing computer programs. Sometimes, a smile is the way to change the world – I know this because this is what Akshay is doing.

Anyone who knows Akshay knows he doesn’t just march to the beat of his own drum – he dances wildly to the music of the Stanford Flash Mob Orchestra, an organization he created to bring spontaneous moments of happiness through music. Akshay is a musician, a designer, a dreamer, an artist and an incredible dorm mate. He has transformed his floor to be a place of play, relaxation and inspiration. There are balloons, streamers, mechanical engineering projects, a self-made pinball machine and music. His room is the place to go if you need to smile.

Throughout our dorm, Akshay has created a program called FroSoHappy. He has organized a system where each person in our dorm will receive anonymous notes, pictures and art from other residents. The goal is to spread happiness and gratitude for others throughout the near 200 people in our dorm. And it worked! As you walk the halls, you will see hundreds of notes from the past month with #FroSoHappy on the bottom to indicate that this anonymous note was a part of the project. What is even more amazing is that you will see other anonymous notes that are NOT part of this project – they were simply left there because people have noticed the impact that showing appreciation for others has had on the happiness of our dorm. This one project alone has made our dorm feel like home.

In addition to projects designed to put us all in a better mood, Akshay’s general goofy behavior brings a smile to our faces without his even trying to do so. After crowdsourcing a costume for Halloween, he now wears the King Julian (think Madagascar) costume each Sunday brunch. His imitation of good friends crack us up, and he is always down to mess with his dormmates by moving mattresses around.

Akshay makes me smile every single day. I love listening to his covers of popular music on his violin. I love working with him on mechanical engineering projects. I love jumping on his bandwagon and making others happy. So, here’s to you Akshay: you have made my freshman fall a blast. I’ve loved spending time with such a beautiful human being. You have reassured me that to succeed in Silicon Valley doesn’t necessarily mean software – sometimes, a smile can change the world, too. Yours has most definitely changed mine.

Nicole Marie Nigro
Individual Creator
8396
c1.staticflickr.com
Where to start...... Let me start with the cliche that life throws us curveballs and what we do with it is what counts.