Standing With the Standing Rock Sioux

While you were busy arguing over why you’re upset about the loss of a headphone jack on your new iPhone, the Standing Sioux were watching their ancestors’ burial grounds be erased. 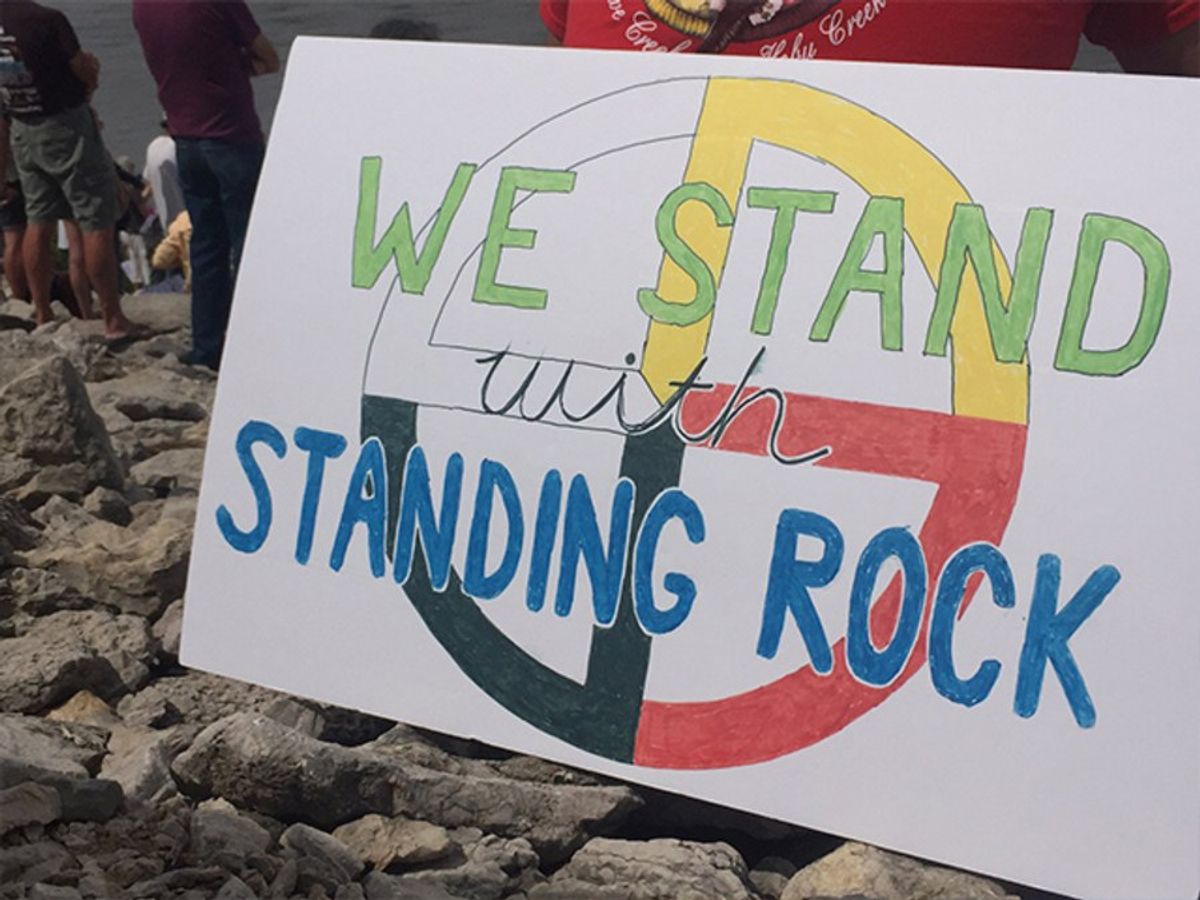 Some hot news topics lately have been the Hiddleswift breakup, the Commander in Chief forum, Kylie and Kendall Jenner getting stuck in an elevator at Fashion Week and the iPhone 7 launch. All interesting(ish) topics. But are they all news? Not so much. One topic that has seriously lacked most mainstream attention is that of the Dakota Access Pipeline.

Some background, the Dakota Access Pipeline Project is a pipeline that will stretch 1,172 miles from North Dakota to Illinois. It will pump an estimated 470,000 to 570,000 barrels of crude oil per day between the Bakken and Three Forks areas. The project got final approval to go ahead in March of this year. This approval is controversial due to Iowa granting the permits and allowing eminent domain.

What is eminent domain? Eminent domain is where the government can reclaim and appropriate private lands for public use. Landowners are paid for their land and the government dictates its future use. In this case, of the $3.7 billion dollars that Dakota Access calculates that this pipeline will cost, $189 million will be used to pay landowners for use or reclamation of their lands. Sounds fair right? Sure.

Here is the issue and here is why the United States populace needs to be paying attention: Standing Rock Sioux Tribe.

The Standing Rock Sioux Tribe of North Dakota stand in the way of the construction of this pipeline. For good reason, too. For a good portion of the summer members of Standing Rock have stood in peaceful protests against Energy Transfer Partners, the organization responsible for construction of the Dakota Access Pipeline. But as with many recent protests, they haven’t always remained peaceful. Recently, a conflict erupted between protesters and the private security crews on the construction sites. A reported six protestors, including a small child, were attacked by guard dogs as well as at least thirty protestors subjected to pepper spray. In addition to that, four private security guards and two guard dogs were injured. Needless to say, things are incredibly tense. But why are the Standing Rock Sioux standing in the way of this pipeline?

The pipeline, that has already begun construction in that area, will go directly through what are believed to be ancient Native American burial sites. Researchers have concluded that there are markers within the area that the DAPL will go through that indicate burial grounds. However, construction crews have already cleared top soil that is 150 feet wide for an area that stretches two miles. Complete burial sites have been overturned and possibly lost forever due to this process.

In addition to the cultural aspect of the protest, there is the environmental one as well. The construction of this pipeline would take it through many federally regulated wetlands and bodies of water, one of which is Lake Oahe and the Missouri River. Lake Oahe is the main water supply for the tribe’s reservation. It is only half a mile upstream from the reservation itself. The pipeline would cross directly under this lake. That means that not only will the waters be disturbed by construction crews, the lake itself will be at risk of possible pollution. If the pipeline were to leak or even burst, thousands of lives would be endangered and the lake itself would be poisoned.

So, how does this affect you?

While you were busy arguing over why you’re upset about the loss of a headphone jack on your new iPhone, the Standing Sioux were watching their ancestors’ burial grounds be erased. While you were busy calling Colin Kaepernick names and burning his jersey for exercising his first amendment rights, the Standing Sioux were getting arrested and attacked for protecting their water supply.

Take a look at the mainstream media. Take a look at what you are seeing. In the past week, I have seen the DAPL mentioned maybe four times. On September 9th a judge denied the reservation’s request to halt construction crews; however, soon after this ruling, President Obama, the Department of the Interior and the Army Corps of Engineers halted the construction until they can ensure that production on the pipeline will not yield any danger. I saw this mentioned by one news source, briefly.

It is time to take a good hard look at the way our media covers things. This is a national story that puts the lives of indigenous people at risk. People who have been made to suffer for nearly 400 years at the hand of colonists and our government. Now, they have been made into mascots and tokenized by white culture, yet our media cannot bear to cover their stories? Pretty screwed up isn’t it? Not to mention our politicians and supposed leaders who continue to stay silent until the last minute. Bernie Sanders, Jill Stein, Shailene Woodley, Rosario Dawson, Leonardo DiCaprio and Susan Sarandon are some of the only public figures to call out the pipeline. In fact, Jill Stein has a warrant out for her arrest for vandalizing Energy Transfer property.

So, America, I plead with you to start paying attention and demanding more from our media and leaders. Demanding that we see less of the trivial pop culture nonsense like Kylie and Kendall getting stuck in an elevator for fifteen minutes, and start demanding that we see more true news stories like the plight of the Standing Rock Sioux Tribe.