A Pirates Heaven Is The Sea Of The Galaxy
Odyssey
CurrentlySwoonLifestyleHealth & WellnessStudent LifeContent InspirationEntertainmentPolitics and ActivismSportsAdulting
About usAdvertiseTermsPrivacyDMCAContact us
® 2023 ODYSSEY
Welcome back
Sign in to comment to your favorite stories, participate in your community and interact with your friends
or
LOG IN WITH FACEBOOK
No account? Create one
Start writing a post
Entertainment

A Pirates Heaven Is The Sea Of The Galaxy 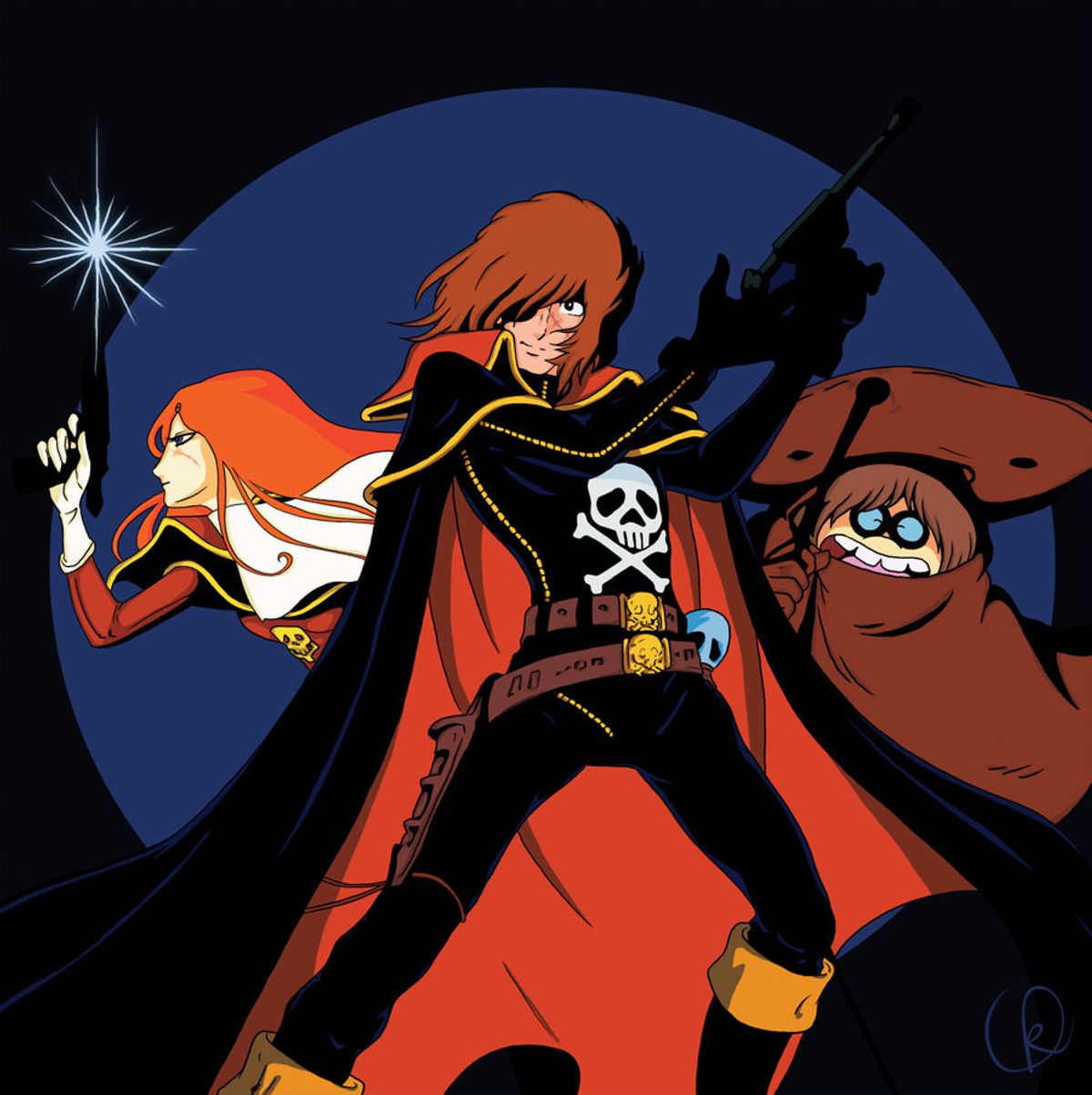 With the new Pirates of the Caribbean coming out next month, I figured we can set sail to new kind of ocean that Capt. Jack Sparrow can never plunder, and that is the sea of the galaxy. The man who tames this sea of stars is none other than Phantom F. Harlock, captain of the Arcadia...

Space Pirate Captain Harlock is the tale of a man who has the whole universe before him, and no one to answer too. Harlock is one of the first intergalactic space pirates in Japanese animation, who does what any other pirate before him does: loot and pillage anyone who may oppose him in the darkness of space. But Harlock does have a few moral obligations before him, which is to above all protect planet Earth from the dangers of an invading alien race called the Mazone that has been setting up shop on Earth for thousands of years already.

For Harlock to be considered a bad guy by his current occupation, he is actually one of the most moral characters in the series. Other than being the protagonist in the series, which by story narrative usually makes someone the hero or good guy of the series, he is a considered a Boy Scout compared to the corrupt government on Earth he feels a strong obligation to protect. The show portrays the Earth government leaders as goofy, un-apathetic, and downright corrupt individuals who would rather play golf than worry about the Mazone race trying to overtake them. The Earth citizens don’t even seen a problem to this, as even they have been welcoming their out-of-planet guests for years at this point, even going as far as making them a part of their society on a day-to-day basis. Still, Harlock continues to point out the issues the Mazone cause on Earth, even if he is branded a villain in the end.

Harlock can’t be a pirate all by himself, since what is a pirate without a crew and a ship? Harlock’s ship The Arcadia is no small task to manage in stopping the Mazone, nor is it a one man job either. Harlock has a crew consisting of the blonde beauty Kei Yuki, the mysterious alien woman Mimme, first mate Yattaran, Chief Medical Officer Doctor Zero, ships cook Miss Masu, and later to join the crew early in the series is Tadashi Daiba. Each member of the crew carries their own distinct personalities, which aid the other characters on the Arcadia both in physical and emotional form.

When Daiba joins the Arcadia crew after his father was killed by a Mazone woman, both Harlock and Kei are there to help him adjust to the crew. Kei looks out for Daiba as his second mom, which Daiba needs in his life to replace the loss of his father and mother in the series. Harlock is not only a mentor to Daiba, but as a father figure too, even if he may not get the role right most of the time. Yattaran seems to at first be a child among the ship, acting as though every job on the ship for him to do is less important than him building models of airplanes and ships. However, Yattaran is far more capable than he appears, and is literally Harlock right-hand-man in order to make sure the Arcadia is ship-shape for each and every journey. Both Dr. Zero and Miss Masu serve as comedy duo on the show, where each time they seem to be on screen, Miss Masu is trying to kill Harlock bird, and Dr. Zero must step in and must stand up for the birds lively hood. Mimme serves as Harlock aid, and even as a drinking buddy to Harlock in parts of the series. Mimme actually needs constant alcohol consumption to sustain her alien powers as part of her character, and is also talented in playing on the harp set in Harlock’s quarters.

Aside from Harlock being close to his crew, he is also close to someone very special on Earth that he constantly has to look out for whenever he stops by from his adventures in space. Harlock is the guardian for a little girl named Mayu, who is the daughter of the Arcadia’s creator Tochiro. You figured Mayu would be safe and sound on Earth in the orphanage home she is currently living in, but you would be dead wrong. Its part of this shows logic that Harlock leaves Mayu on Earth so she doesn’t set foot in the Arcadia and become a pirate, per the wishes of her deceased father. Because of this, Mayu orphanage home has to be an almost mirrored environment of what your typical Serbian prison camp might be, but you know, for the Earth kids! Mayu is constantly baited out by the head of the orphanage and the Earth military to try and destroy Harlock over and over again. She is in peril of being abducted through the Sahara desert, held hostage by her adult aids, and even almost falling to her death which no one from the orphanage even batted an eye in trying to save her. And yet, despite the tears from her eyes that she cries to Harlock every time he comes to save her, he must remind her that she must be diligent in remaining on Earth per her father’s wishes and not join the pirates’ life. I am only 16 episodes into this show and that isn’t the half of what happens to Mayu.

So one may wonder, who is the man behind the creation of Captain Harlock? Captain Harlock was conceived by the mind of Leiji Matsumoto, who before went on to make Space Battleship Yamato and Galaxy Express 999. Both shows not only took place in space, but also dive into the connections between characters in each show. If there is one things Matsumoto does well in his series from what I have seen, it’s the connection that happens between his protagonists and their friends/allies. Despite being the most hated and feared individual on Earth, Harlock is one of the few people with strong morals and goals set before himself and his crew. These characteristics put on Harlock makes him respected very well among those who know and work with Harlock on a day to day basis. With Matsumoto using Kei as the motherly figure, he has used women in other series before as the same role to assist the main protagonists. An example would be the role of Matel in Galaxy Express 999, where she is the mother figure for the protagonist Tetsuro as he vows revenge against his mothers murder. There is also another female character that is important to the Harlock series named Emeraldes, but her presence hasn’t shown up in the series yet, so I will refrain from mentioning her at the moment till I see more about her character.

From what I gather between this series and the later Harlock movie Arcadia of my Youth, both seem to be the strongest in the Harlock series to come after it. Arcadia of my Youth was one of my first introductions to Harlock (be it the Vengeance of a Space Pirate dub), which made a strong impression for me for being a prequel to the television series in a way. I plan on seeing more Harlock made after Arcadia of my Youth, such as SSX, Harlock Saga (which I saw years ago from Blockbuster but I don’t remember much of it other than it didn’t hold my attention) and a few others. The most recent for the series is the 2013 CGI Space Pirate Captain Harlock movie directed by Shinji Aramaki. I have seen my fair share of Aramaki directorial movies, and from what I remember, that might just be his best one yet. I should also note, that is saying something from the other works I’ve seen so far by Aramaki, just saying.

If this article has peaked your interest, and you have a Crunchyroll subscription, then check out Space Pirate Captain Harlock. The series is subtitled online, and the only dub of the show ever done is going back 30 years at this point with the Harmony Gold dub (there is another dub titled Captain Harlock and the Queen of a Thousand Years. If you are interested in getting that series, there is a site that houses all 65 episodes). Captain Harlock is also available from Discotek Media if you feel pressed to own the entire 42 episode on DVD. Thanks for reading and set sail across the stars!