With a wry and dry wit, Flattery pokes at and twists the boundaries of the roles and the restrictive expectations of women. 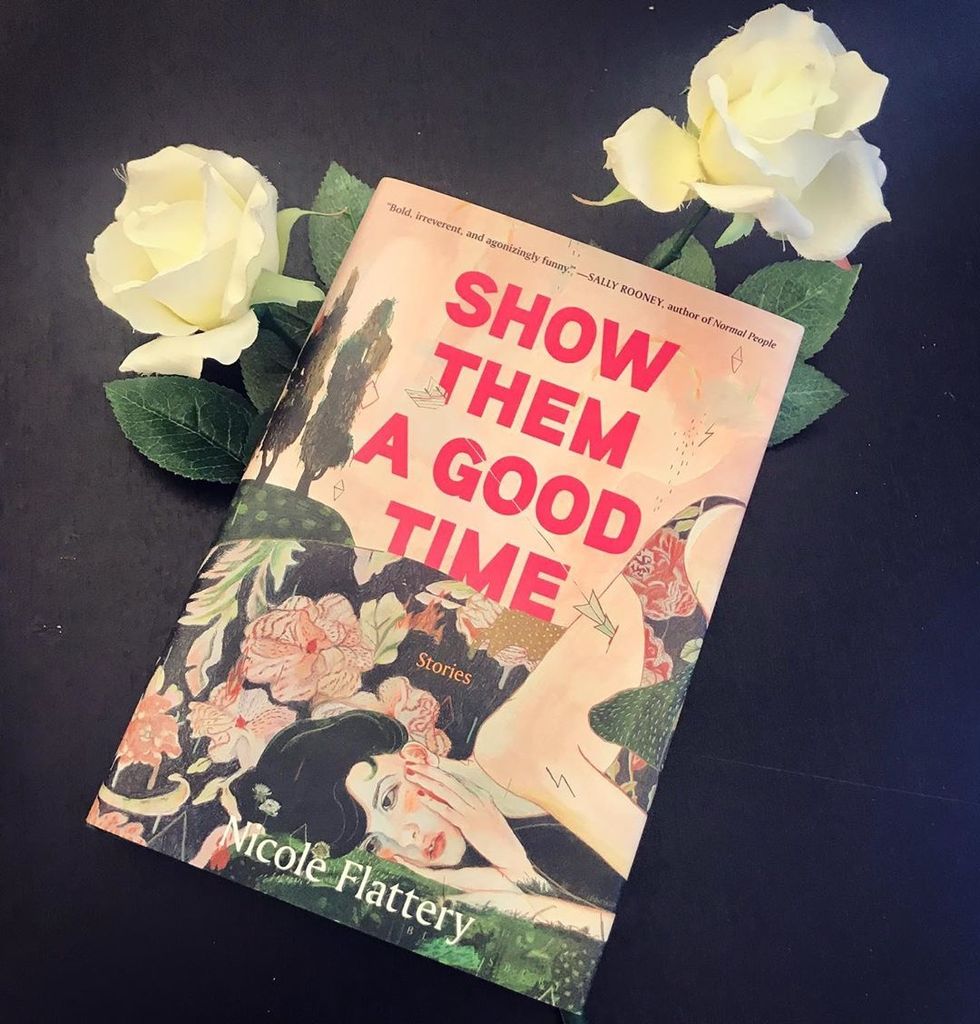 Nicole Flattery's debut book Show Them a Good Time is an unusual collection of short stories narrated by young women (usually Irish, like Flattery herself) trapped in surreal and dark circumstances. Think the bizarre images and bleak circumstances of Ottessa Moshfegh's Homesick for Another World, but with all-female protagonists that you can sympathize with on some level. A former porn star seeking employment reform in a highway rest stop and gas station, a 14-year-old developing her sexuality as she crushes on an older man, a college student who can't even remember what she's studying, a famous comedian's girlfriend who is alienated for not being famous herself, a teacher exploring fruitless online dating as the literal apocalypse draws near: it's a cast of sad stories brightened by deadpan humor, simple prose and the thrill of unexpected actions from quirky characters.

With wry and dry wit, Flattery pokes at and twists the boundaries of these roles and the restrictive expectations of women. Corporate homogeneity and physical appearance take a hit in the eponymous first chapter "Show Them a Good Time." The ex-porn star narrates, "At these gatherings, it was not unusual to be offered advice that would make a 'new woman' out of me." These "gatherings" refer to the motorway garage's employee meetings, led by the female boss referred to only as "Management." "We all agreed early on that my pretty face and nice body were my best qualities, but I could probably pull up my socks re everything else [sic]."

Employee expectations take a hit again in "Hump," along with the confines of being a woman in a relationship. "Previously, he had listed out my faults with amazing conviction and I truly thought that brought us closer together as a couple," says the assistant sleeping with her boss. "I had no discernable direction in life, I didn't want anything, I was stupid and entitled." As the narrator deals with the grief of her father's death—a grief that manifests as a hump on her back—she loses interest in her job. "…I tried. My concentrating face required more effort than genuine concentration. The organisation of the face, the setting up of the features, was exhausting. Afterwards, I often lay down on the cold tiles of the office bathroom floor and didn't move for hours." These well-paced comedic quirks and ironies keep the collection from being too deeply mired in depression.

The piece that stands out most among the eight stories is "Abortion, A Love Story," a genre-bending piece framed as a play written in prose that centers on the lives of two disaffected female college students brought together by tragedy, dark wit, and the lustful attention of the same professor. An italicized disclaimer starts the piece: "Some names and places have been changed. This text went to press before the end of rehearsals and so may differ slightly from the play performed." Pulling the most weight at 85 pages, this three-part story first focuses on Natasha's perspective, then Lucy's, and then details the entire performance of the play they've written called … "Abortion, A Love Story."

The frame of the play is intricate and thought-provoking. Natasha mysteriously receives emails that somehow narrate the events of her life in stage directions, and later we discover that Lucy has written a play and also hacked Natasha's email, suggesting that Lucy is somehow the playwright of Natasha's life. But then Lucy starts writing "Abortion, A Love Story," subverting the idea of the play being a frame and insinuating that this whole chapter is the autobiographical script of the character's offstage and onstage lives.

I'll readily admit that the nuances of the story befuddled me. I'm sure that there's some device or meaning that was lost on me, but the mental gymnastics were so intriguing that I wanted more story, not more explanation. However, when the two girls perform their erratic and depressing play, Lucy's character suggests that to want more, to read more, is a macabre desire: "I don't think you came out here to hear me be funny at all," she addresses the audience. "I think you came out to hear some pain. You don't care what it is exactly, but you want it. … You take one look at me and you need to know I've been punished."

This moment feels like a direct address to the reader, not just the paltry number of college students in the theatre. It's hard to negotiate with my conscience why a series of bleak stories with melancholic humor can be so entertaining, but something about these women and their biting attitudes toward their fixed circumstances keeps the pages turning. With darkly startling images like a teenage girl pulling a string of dead flies out of her mouth in "Sweet Talk," it's not the pain or expectation of punishment that's captivating, but the acerbic and unexpected ways the characters navigate their realities.

At the close of "Abortion, A Love Story," Lucy reflects at the end of the first and last performance of the play: "'I'm not sure,' Lucy says. 'I'm not sure. I don't know if I get it.'" I feel the same way, Lucy. But perhaps, exasperatingly, there's nothing we're meant to "get." It's a joy to be along for the ride with these abnormal personalities. The mind-bending, surrealist stories never cross the line into garbled garbage. But if you aren't tickled by depressing humor or strictly believe in sensical stories with clear takeaways, then this collection probably wouldn't show you a good time. Flattery doesn't attempt to suggest that there's any clear path to escape (don't expect many happy or tidy conclusions to these stories), which is perhaps the most haunting theme of all.