"Rogue One" Is The "Saving Private Ryan" Of Star Wars
Odyssey

"Rogue One" Is The "Saving Private Ryan" Of Star Wars 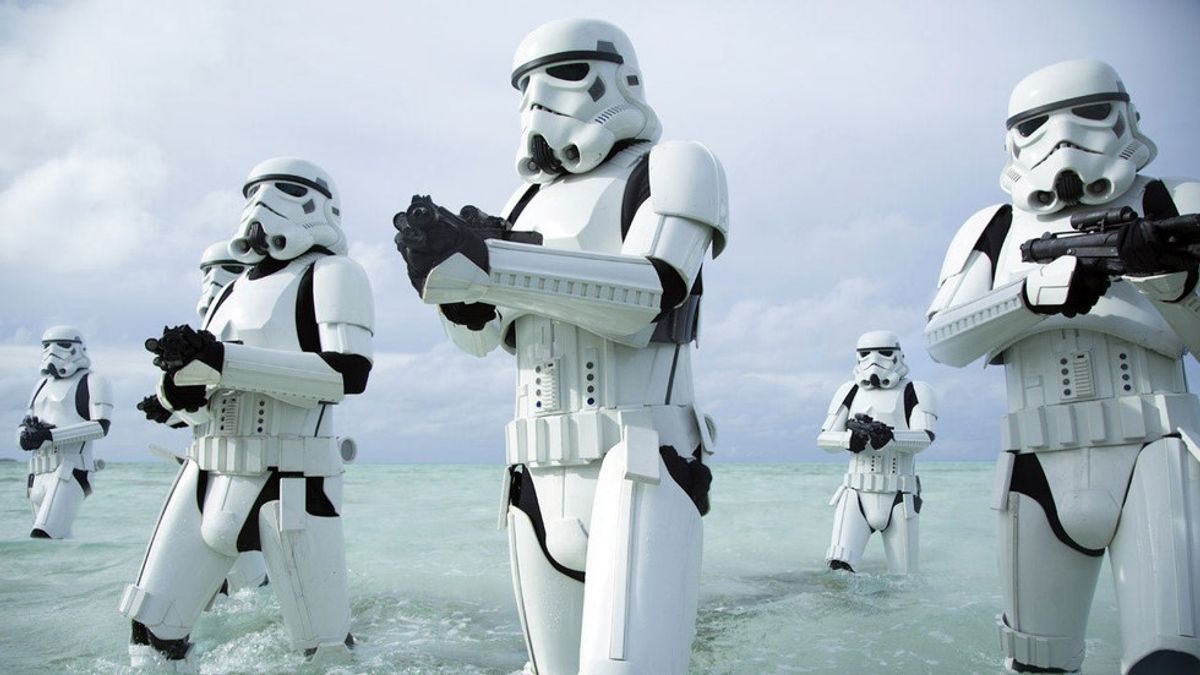 This review will be in two parts. The first half will be Spoiler-Free, and the last half will include Spoilers, as I cannot express my full thoughts without covering some spoilers. If you want to avoid all spoilers, skip to the end of my review.

I love Star Wars and have since I was a child. So I was ecstatic to hear Lucasfilm was creating a spin-off film set before A New Hope. When tickets went on sale, I bought mine as soon as I could and gathered some of my closest friends to see it opening night. My childhood excitement was welling within me, and when the end credits rolled, I was not disappointed.

Rogue One: A Star Wars Story is the 8th live-action film in the Star Wars franchise (9th if you count the animated The Clone Wars movie, and 11th if you count the horrible Ewok films). Set directly before the original film, Star Wars: Episode IV – A New Hope, Rogue One is the first Star Wars Anthology film, focusing not on the larger story of the Skywalker family covered in Episodes I-VII. Instead, Rogue One depicts the story of the Rebels on their quest to steal the plans for the evil Galactic Empire’s new superweapon: The Death Star, a giant space station capable of destroying entire planets.

Whereas the Episodes feel epic and large-scale, with the most important action sequences being lightsaber battles between powerful Force-wielders, Rogue One feels more akin to a war movie, with normal people fighting with normal weapons. Action scenes feel grounded and realistic, occurring on-land between soldiers fighting for their lives. The expression “War is hell” rings true in this film, as each laser blast feels more excruciating. Every Rebel soldier, not just the ones we know the names of, feels important to the overall battle. This is the first time we have ever seen a WAR in the Star Wars in a grounded, gritty way, and every random soldier’s death felt excruciating and real. The stakes feel high, and every battle feels like a round of Star Wars: Battlefront.

The strongest part of this film is the cast. Every member of the cast, including the ensemble is great and help make Rogue One feel personal and relatable. Felicity Jones does well as Jyn Erso, believably portraying a woman feeling betrayed by the world and fuels some of the most emotional moments in the film. Diego Luna brings some well-needed depth to the Star Wars universe in his role as Cassian Andor, a morally grey Rebel soldier asked to carry out some questionable orders, disturbing the idea that any side in a war is ultimately good, even the Rebellion.

Donnie Yen and Wen Jiang as Chirrut Îmwe and Baze Malbus are wonderful, as is Riz Ahmed as Bodhi Rook. Mads Mikkelsen and Ben Mendelsohn also stand out in their roles as Galen Erso – Jyn’s father – and Orson Krennic, the director overseeing the Death Star project.

The stand-out role for me was Alan Tudyk as the voice of K-2SO, a brilliant source of comedy and character in the film. K-2 undoubtedly placed himself in my heart as one of my favorite droids in the Star Wars universe, right next to R2-D2 and BB-8.

Darth Vader, though he wasn’t in the film much, was a huge highlight of the film, brilliantly portrayed and utilized, though I won’t get into detail until the spoiler section.

Overall, I thought the film was amazing. The plot was great, the characters were spectacular and the stakes were high despite everyone knowing ultimately how it would end (as A New Hope exists). The third act was fantastic.

Rogue One was not a perfect movie, however. The first act seemed choppy, rapidly introducing a bunch of planets and characters in order to get the action rolling, and some of the cameos and nods to the wider Star Wars mythos felt forced, though most of them felt natural and were very well done. And as soon as the film found its footing, it was spectacular and I felt entertained by it the entire time. I recommend everyone go see this movie, especially if you love Star Wars as much as I do.

SPOILER ALERT: If you have not seen Rogue One, please skip to the end of the review or cease reading.

Darth Vader finally killed some folks! Upon recently rewatching the Star Wars saga, I realized that Darth Vader only killed two Rebels in the original films in person (excluding X-Wing pilots, as killing someone from a fighter is extremely impersonal), Captain Antilles and Obi-Wan Kenobi. So my biggest hope for this movie was that Darth Vader would kill folks. And he delivered. Thank the maker. That scene in that hallway was perfect and I felt the horror and the glee all intermixed as Vader’s crimson lightsaber hissed to life and he began destroying soldiers. Wonderfully well-done. It might be my favorite Vader moment in canon.

I was pleased to see the return of Grand Moff Tarkin and Jimmy Smits as Bail Organa, though I thought the CGI on Tarkin was at times distracting and could have been better polished. Their cameos and many of the other familiar faces were well-welcomed and necessary for the film. However, many cameos felt forced, chief among them C-3PO, R2-D2, and Princess Leia. In those scenes, I felt that the film stood completely still as the filmmakers metaphorically winked at the camera and said, “Hey! Remember these guys? From Star Wars? Huh? Remember how great they were?” I had no problem with them being there, but their inclusions felt poorly done and I would have liked to see them better included.

Lastly, I was not the only person who predicted the deaths of the entire main cast, but I was satisfied by how the screenwriters used the deaths. The beginning of the film focused on getting the audience emotionally invested in these characters we have never seen or heard of before and boy, did that pay off. Each main character death felt more painful than the first and I was nearly in tears at the end.

I thought that Jyn and Cassian’s death scene was perfect. When I noticed some romantic chemistry between the two, I feared the film would end with them making out as the Death Star blew them away. Instead, the two hugging on the beach as the explosion from the Death Star blast moved towards them was brilliant. It respected the characters and tugged on my heartstrings. What a fitting end for such well-developed characters.

Rogue One was an amazing ride and wonderful addition to the Star Wars universe. At times the pacing was choppy and some of the cameos and references felt forced. But the characters were well-portrayed and well-loved, the acting was fantastic, the action was gritty and realistic, most of the references were amazing (keep an eye out for a ton of Star Wars: Rebels references) and the stakes felt incredibly high. Rogue One is well worth the watch, particularly on the big screen and both casual movie-watchers and hard-core Star Wars nerds will enjoy it.