'The Rocky Horror Picture Show' May Have Been Left Behind By This Generation, But The Real Fans Can Still Relate

'The Rocky Horror Picture Show' May Have Been Left Behind By This Generation, But The Real Fans Can Still Relate

7 scenes in "The Rocky Horror Picture Show" that we still relate to. 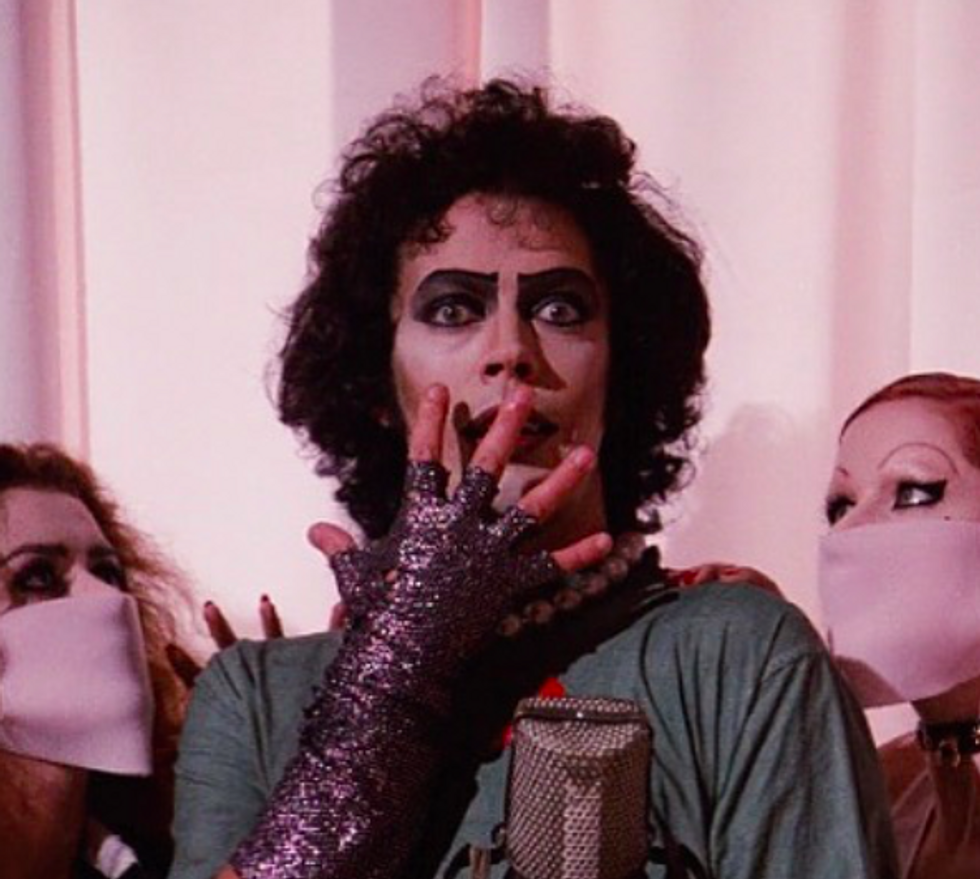 The Rocky Horror Picture Show (1975) born as a low-budget baby that was nurtured to be a huge cult classic phenomenon. It's catchy, rock tunes and ridiculous plot had everybody wanting to sing along and dance, and it still does today! The only thing is, its been treated like the dusty record on the shelf, unbeknownst to the new generation of teenagers ( because children shouldn't watch this movie ).

It's a classic, though. We should be going to midnight double features and dressing up like the characters. We should look back at this amazing musical with good memories. We should all know the time warp!

Alas, I doubt that will happen, so for all you Columbia's, Magenta's, and Riff Raff's: seven scenes that we can still relate to.

1. The scene where Rocky awkwardly dances after waking up is all of us at dances

Let's face it, we've been to at least one dance where we didn't know what to do. Couples are kissing, hugging, and possibly trying to make babies on the dance floor and you're there- standing against the wall and trying to fit in. You may of not been shirtless, but we've all pulled a Rocky. Or maybe, you're the one in the back watching your friend make a fool of themselves. Either way, we're no stranger to it.

2. The time when Frank-N-Furter emulated everyone when our best friends are being dumb

Do you remember that one time when you were out in public with your best friends and they were acting a fool of themselves and everyone starting? Yeah? Well, this scene made everyone watching yell " Me!" at some point in time in this sentence. Maybe it's when he did the dramatic look away.

Regardless, this moment resonates with everyone.

3. When Frank-N-Furter was a savage with his schemes

Frank-N-Furter flattens their tires to lure them there, maybe you put hair-dye in someone's shampoo, but nothing is better when that person comes up to you with no idea it was you. I think we all pull the mad scientist's Savage moment.

This can also to apply when you get your sibling in trouble. Isn't it the best feeling to see your sibling quake under the glare of your mother and/or father?

4. The scene that Janet's true colours are revealed is like being caught doing something wrong

Can you recall the time that you were in trouble and you tried to distract them? Well, that's exactly what this scene potrays. Maybe it's even trying to confuse someone for fun. Any way you do it, it's still the epitome of this scene.

5. The part where Frank-N-Furter is bored with everyone else at Rocky's party

Frank-N-Furter was only interested in what he said, and I think you can admit you have to. Just, I don't think we can pull it off with such amazing sass as he does. Also, IT WAS HIS CREATION'S BIRTHDAY AND HE STILL WAS BORED!

Though, he did just find out that Rocky had betrayed him with Janet. We've all had that moment.

6. The scene that Janet loses her cool

Janet threw the most annoying - and squeaky - fit ever when Frank-N-Furter turned Brad into stone. We may not have her predicament, but we've had that moment where we were so annoyed that we all screamed for people to stop.

Then, there's the freak outs when you meet your celebrity crush. The moment is so tense that you don't know what to do. So you freak out. It's even worse if they hug you, though.

I don't know about you, but I would love a hug from Frank-N-Furter; as long as he doesn't turn me into stone.

There isn't much to say for this, but we have to give Tim Curry applause for this fabulous cloak-dropping scene. He set it on fire and we all hope to be this bougee. My advice: wear the coolest thing you own, gather a crowd of people, and walk in singing and throw your cloak off when you reach the front. Maybe then, MAYBE, you'll be as fabulous as this scene.

Whether you're bopping to the songs or starting with horror at the fabulous mad scientist because you don't know film history when you see it, we all can relate to these scenes.

If you haven't watched The Rocky Horror Picture Show, I highly recommend it. It promises to chill you, thrill you, and full fill you. So, come up to the lab and see what's on the slab.

The only thing left to say is: Let's do the time warp again!