Revolve, Your 'Anti-Cyberbullying' Line Has Us All Asking, 'What Were You Thinking?' 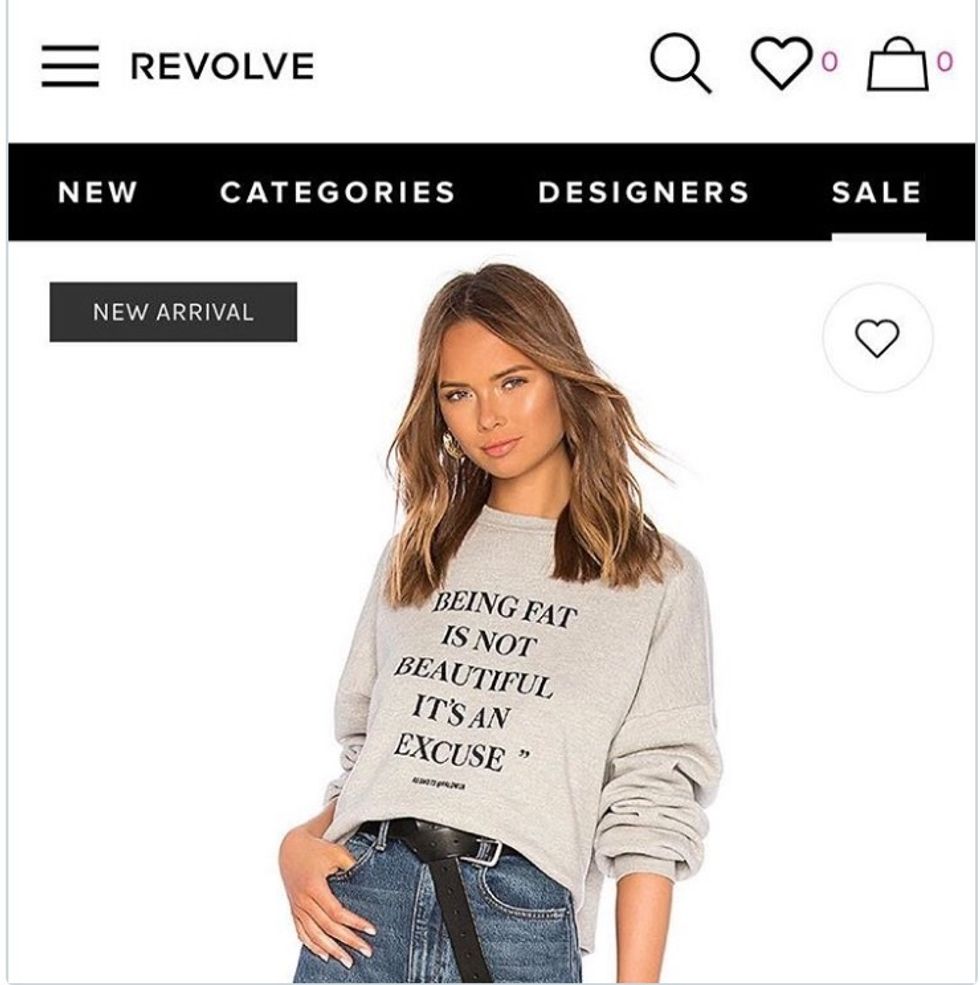 "Being fat is not beautiful it's an excuse"

In Revolve's statement, they claimed that this sweatshirt was part of a collection meant to comment on the "'normality' of cyberbullying and the shared desire to create a community for those most affected by the epidemic." All of the statements in the collection were collected from 5 influential women, including Lena Dunham and Cara Delevigne, but this piece was prematurely released. The quote on this sweatshirt was originally told to Paloma Elsesser, a plus-sized model, by an online troll.

I know that this was supposed to be a part of a body-positivity movement, but it failed.

Showing this sweatshirt on a model who is extremely thin and could not, in any way, relate to this message not only perpetuates the stigma surrounding fat-shaming but is disrespectful to the women around the world who have heard similar comments before.

The problem isn't only that a designer believed it was acceptable to print these words on a piece of clothing (even though that's a questionable decision itself), but it is that someone actually thought and believed these words before deciding to troll Paloma Elsesser online.

What society has failed to understand is that these hateful comments aren't only directed at celebrities who can use their platform to shine a light on fat-shaming and other injustices; they are told to teenagers, young adults, and grown women who do not fit the idealized "curves in the right places" model that's become accepted.

If I saw someone wearing this $168 sweatshirt, my first thought would not be that they were promoting body positivity. In fact, I would believe quite the opposite. This quote, without any context or explanation, promotes the fat-shaming culture the media has created and continues to perpetuate through their beauty standards. Beauty standards that are not reflective of the average woman in any way, shape, or form.

Revolve has since pulled the sweatshirt after hearing the public's response, or should I say the public's uproar. In other words, Revolve realized that selling a sweatshirt that promotes relapses, self-hatred and low self-esteem maybe wasn't the best decision they've ever made.

The silver lining in this story is that there are people who are willing to stand up for what they believe in and take down the fat-shaming society we live in. As more people shut down the trolls who believe that being fat is an excuse, body positivity can truly start to exist.

fat shaming
Report this Content
This article has not been reviewed by Odyssey HQ and solely reflects the ideas and opinions of the creator.