Ariana Grande Was Groped At Aretha Franklin's Funeral By A Pastor, And Somehow People Blamed Her

Ariana Grande Was Groped At Aretha Franklin's Funeral By A Pastor, And Somehow People Blamed Her

A scummy pastor who couldn't keep his hands to himself had no right to soil such a reverent occasion. 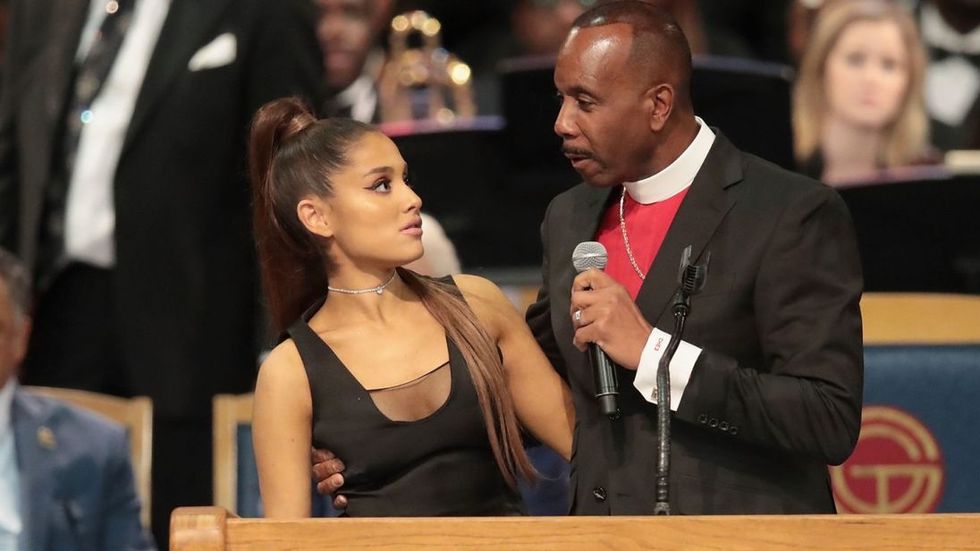 For those of you who missed out on this debacle, I'll give you the brief run down. On August 31, 2018, Ariana Grande performed alongside several others at Aretha Franklin's funeral.

Several big names were in attendance such as Bill Clinton, Tyler Perry, Faith Hill and many more. The service was utterly humbling for not only those in attendance but also those that loved her music. Barack Obama even wrote a letter to Aretha Franklin's family, stating, "Aretha's work reflected the very best of the American story."

One of the many stars in attendance was none other than Ariana Grande. The 25-year-old sang a rendition of Aretha Franklin's "(You Make Me Feel Like) A Natural Woman." Watching the video from the funeral, it is clear to see that everyone in attendance was very moved. Her performance, at least in my opinion, was an incredible tribute to Ms. Franklin's memory. Upon completion of the song, Ariana Granda stood beside Pastor Charles Ellis at the pulpit.

Ellis, perhaps unintentionally, belittled Ariana Grande, saying "When I saw your name on the program, I thought it was a new item at Taco Bell." This joke is not only insensitive but potentially racist. Ariana Grande seemed a little taken aback by that bizarre comment, but what followed was much worse. As he was apparently trying to recover from his joke, his hand that was originally placed at Grande's waist slowly started traveling up her side. His fingers eventually landed on the side of her breast.

In the video, Ariana Grande looks particularly uncomfortable, but seemingly paralyzed by fear. In the 30 seconds that it took for the subtle assault to take place, Ariana Grande goes from her sweet, bubbly personality to a closed off, terrified woman that had just been groped on national television. You may find yourself saying, "Did he really grope her? Maybe it was an accident." No way. She clearly tries to step away from him, but his fingers continue to roam.

After an uproar on social media, Pastor Ellis had a statement to make concerning the alleged grope, "It would never be my intention to touch any woman's breast. ... I don't know, I guess I put my arm around her." Some viewed this apology as a cop out, a weak apology, a way to escape the pressure he was feeling, and personally, I completely agree. Anyone that has seen the video of their interaction can clearly tell that Ariana Grande was severely uncomfortable, but the pastor's hands remained on the side of her breast.

The video has circulated like wildfire, causing a range of responses. Many of them can be found on Twitter under the hashtag #RespectAriana. Yet, though Grande has received an outpouring of love and support, many have not been so kind. One Twitter user stated that if her dress had not been so short, she would have been respected. Others have wondered why she didn't speak up, shove the pastor away, or otherwise react. To that I say, some people do not have the reaction to fight back. More often than we'd like to believe, the initial reaction is to freeze, to want the inappropriate touch to stop as soon as possible.

In this situation, Ariana Grande was absolutely in the middle of a freeze response. When the threat is too great to outrun or fight back against, or if the situation prevents you from doing either of the two options, you freeze. So why are we shaming Ariana Grande for the situation? Her clothes do not dictate her consent. You don't ask clothes for consent, you ask people. Someone's body is their own, and no one has a right to it. Through to #MeToo movement, we have seen so many individuals come forward with their own stories. Let this be a teachable moment.

Until we view women as autonomous beings that have a right to their own bodies, nothing will change. That pastor was utterly wrong for what he did and based on that video, there is no other reality than the fact that he did indeed grope her. Ariana Grande's dress had nothing to do with her assault, a greedy, selfish man with no concept of respect did. That was sexual assault, end of story. There is no excuse for him, and I hope this is a wake-up call to everyone around the world.