Gravitational waves are back at it again. 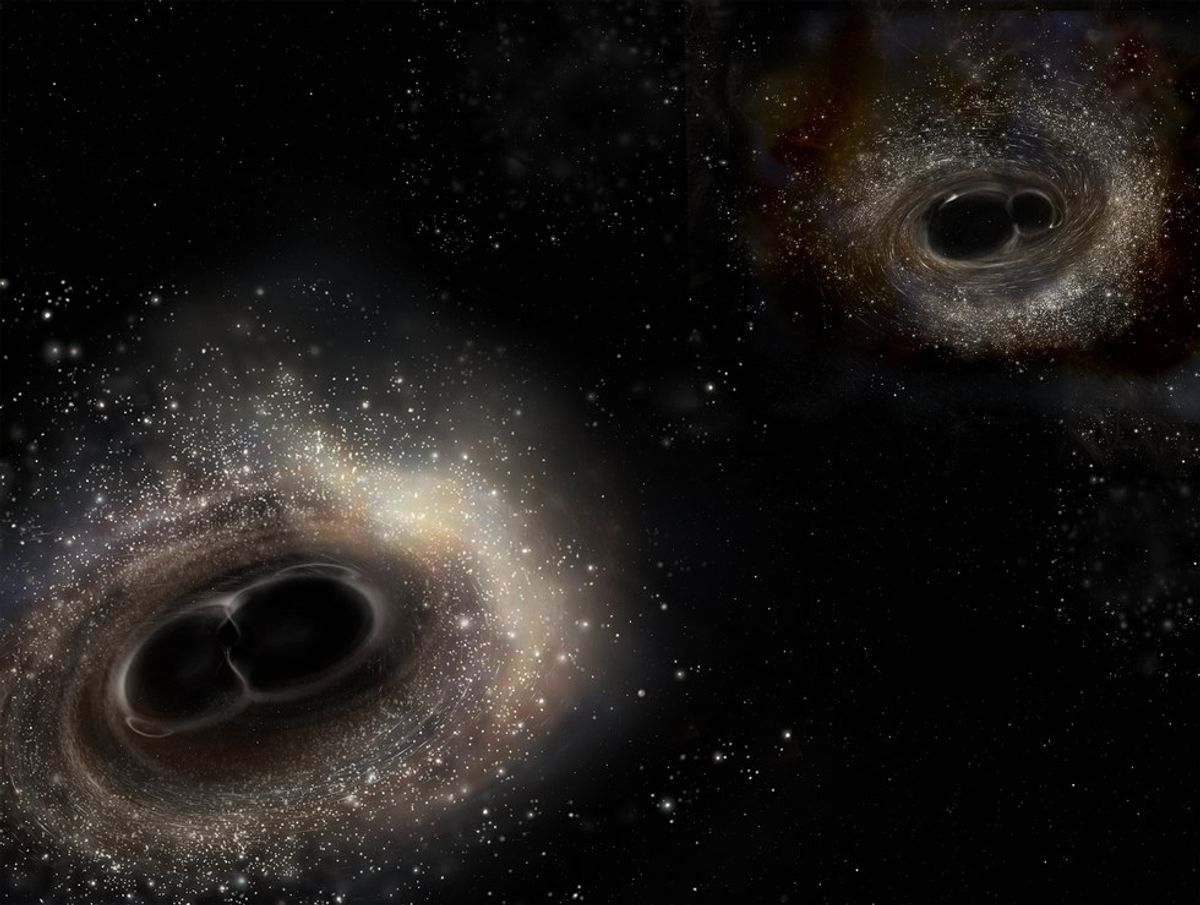 Remember that gravitational wave thing those nerds were geeking out about back in February? Well, in a paper published this past Wednesday, June 15, LIGO announced that they’ve been detected again.

In case you’re not sure what this whole gravitational wave business is about, or you only vaguely remember hearing about it in the news, here’s what happened.

First, what are gravitational waves? That's an excellent question. To answer that, we’ll have to explain another concept.

In 1916, Albert Einstein predicted gravitational waves when he published his theory of general relativity. General relativity is based on the idea that, unlike the Newtonian view of gravity as a simple force, gravity can be described more as a curve in spacetime. A common way to explain this is to imagine the fabric of spacetime as, well, a piece of fabric. If you put something with mass on this fabric, it’ll put a dent in the surface. That’s comparable to what something with mass does to spacetime.

Now imagine dropping something into still water. You’ll see ripples, waves caused by the energy released when you dropped the object into the water. In a similar way, when explosive events occur in space, and the objects are massive enough, energy is released in the form of gravitational waves that compress and decompress spacetime. The two confirmed detections of gravitational waves were both caused by the merging of two black holes.

The first event seen last September (and announced in February) was much more dramatic than the more recent one. It was the result of two massive black holes, 26 and 39 solar masses, crashing into each other to form a 62-solar-mass black hole. If that seems weird, it’s because 26 and 39 don’t add up; the 3-solar-mass amount missing was converted into energy (per Einstein’s famous E=mc2 equation) that made the gravitational waves. When it was detected, it was described as a loud “chirp.”

On the contrary, the waves detected last Christmas (the ones announced on Wednesday) were the result of a much smaller event, the merger of an 8-solar-mass and a 14-solar-mass black hole that formed a black hole of 21 solar masses. The signal was quieter, making it harder to pick out among the noise. In comparison to the “chirp,” it’s been described as “a faint squeak.”

So how do physicists detect gravitational waves? Well, they do it using LIGO, the Laser Interferometer Gravitational-Wave Observatory, of which there are two detectors that have been used as a single observatory. One is in Hanford, Washington, and the other is in Livingston, Louisiana. They’re interferometers, which means they work by observing wave interference.

The detectors are L-shaped, with each leg of the L being 4 kilometers long. A laser beam travels down each leg of the detector, hits a mirror, and recombines at the joint of the L. The crests of one wave line up with the troughs of another, causing them to interfere with each other. When this kind of interference occurs, the light waves cancel each other out, and no light hits the detector. But when a gravitational wave passes, space is compressed, and the light waves, no longer the same length, don’t interfere the same way. When the wave passes, everything goes back to normal, and the light waves go back to canceling each other out.

There’s a lot that the detection of gravitational waves means for us. It’s opened up a whole new kind of observational astronomy, one that doesn’t depend on light. This is extremely useful because it can help us learn about what the universe was like at its very beginnings. Until now, we didn’t have the means to do such a thing because of our dependence on light. This was a problem because, for about the first 380,000 years or so, the universe was opaque to light, so what really happened in that time is a mystery. But it doesn’t have to be anymore.

We’re also learning a lot about black holes. For example, the recently found signal came from the merger of two smaller black holes. It’s amazing that we’ve detected binary black holes at all, but the smaller pair means that they orbited each other longer than the first one did before their collision, and scientists were able to measure their spin rates.

There’s a lot more we can learn about black holes and the weird and wonderful physics surrounding them. Currently, a huge question that scientists want to answer is how binary black holes form. They could be born of a binary star system in which both stars collapsed into black holes, or they could be black holes that later in their lives (or deaths?) became gravitationally bound to each other. Both are plausible scenarios, but one might be more common than the other, and scientists are excited to find out.

Another thing scientists want to observe using gravitational waves is the merging of neutron stars. Neutron stars are the alternate death scenarios for massive stars (the other being the formation of a black hole). Neutron star mergers haven’t been observed yet, but it’s a possibility that scientists are hoping to see in the future.

While there has been some buzz around this recent detection, there’s not as much as there was the first time around. But there should be. It may not be a completely new thing to see gravitational waves after their initial discovery, but the second detection confirms everything we’ve learned the first time. We’ve learned new things, too, from the recent detection that we couldn’t observe from the first. And it’s still part of the beginning of something exciting and new.
Report this Content
This article has not been reviewed by Odyssey HQ and solely reflects the ideas and opinions of the creator.