As A Sexual Abuse Victim, Painting '#MeToo' On A Sarasota War Statue Is Taking It Too Far

There is a line you should never cross and that is it. 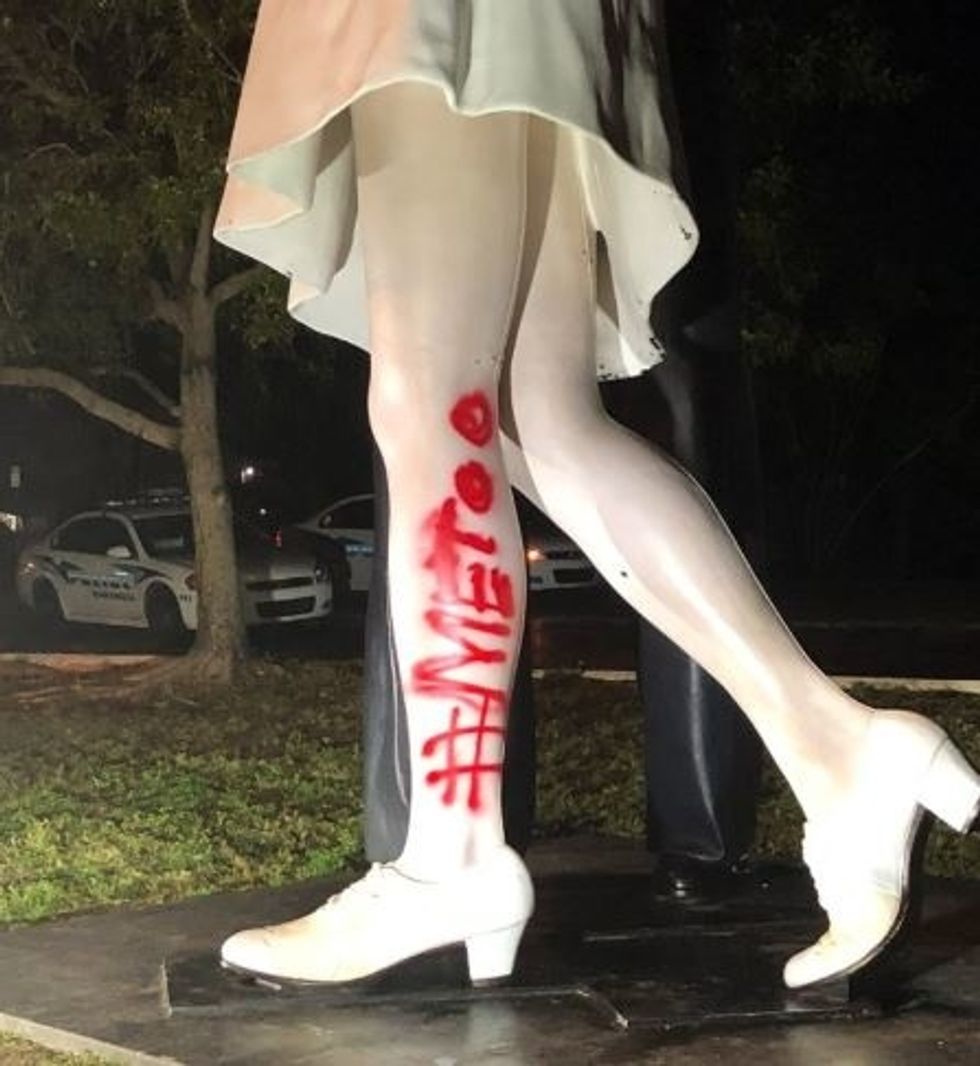 The famous picture of the sailor kissing a woman was taken right on V-J Day, when Japan surrendered to the U.S. in World War II. For decades it was seen as a representation of how excited and relieved everyone was at the end of the war.

The picture touched the hearts of thousands as you could feel the overwhelming amounts of joy that came from the snap of the camera. While the woman in the picture died back in 2016 due to a struggle with pneumonia, the sailor died on Feb. 17, 2019, at the age of 95.

Most people saw it as both a heartbreak and heartwarming that the couple that was once photographed were now together.

There is a statue made of the picture that resides in Sarasota, Florida. Police found early Tuesday morning of Feb. 19, two days after the sailor's death, that someone had spray-painted #MeToo on the statue's leg in bright red.

As a woman, I strongly encourage those who have been sexually assaulted/abused in any way shape or form, to voice themselves in the best way they can. To have the opportunity to voice what they went through without being afraid. As a woman who has also been a victim of sexual assault and has been quiet for many years...

This act of vandalism makes me sick.

While the woman that was kissed by the sailor was purely kissed on impulse, she had stated in an interview with The New York Times that, "It wasn't a romantic event. It was just an event of 'thank God the war is over.'"

People were celebrating and, as a sailor, that man was so over the moon about the war being over that he found the nearest woman to celebrate with.

While I don't condone that situation, I understand both the reason behind it as well as the meaning behind the photo. I understand that, while it wasn't an intended kiss, it was a way of showcasing relief. To stick #MeToo on a statue of a representation of freedom is not the right way to bring awareness of sexual abuse.

It gives those the wrong idea of why the #MeToo movement was started. It started as a way for victims of sexual abuse to share their stories. To share with the world that they are not alone.

It helped me realize I wasn't alone.

But the movement, soon after it started, became a fad that turned wrong. People were using it in the wrong context and started using it negatively instead of as an outlet for women and men to share their horrific experiences of sexual assault.

That statue has been up for years. To wait until the sailor passed away was not only rude but entirely disrespectful. The family of that sailor is currently in mourning. On top of it, it's taking away from the meaning behind the photo/statue. World War II was one of the darkest, scariest events in — not just our American history — but the world's as well.

Sexual abuse is a touchy matter, I encourage everyone to stand up for what's right. But to vandalize a statue of one of the most relieving days in America's history is an act that was unnecessary and doesn't get the point of #MeToo across in the way it should. If anything, it's giving people a reason not to listen. To protest and bring attention to something, you want to gather the right attention.

This was not gathering the right attention.