What The Outcome Of This Election Has Taught Us And What We Can Do About It
Odyssey
CurrentlySwoonLifestyleHealth & WellnessStudent LifeContent InspirationEntertainmentPolitics and ActivismSportsAdulting
About usAdvertiseTermsPrivacyDMCAContact us
® 2023 ODYSSEY
Welcome back
Sign in to comment to your favorite stories, participate in your community and interact with your friends
or
LOG IN WITH FACEBOOK
No account? Create one
Start writing a post
Politics

We can all do this together. 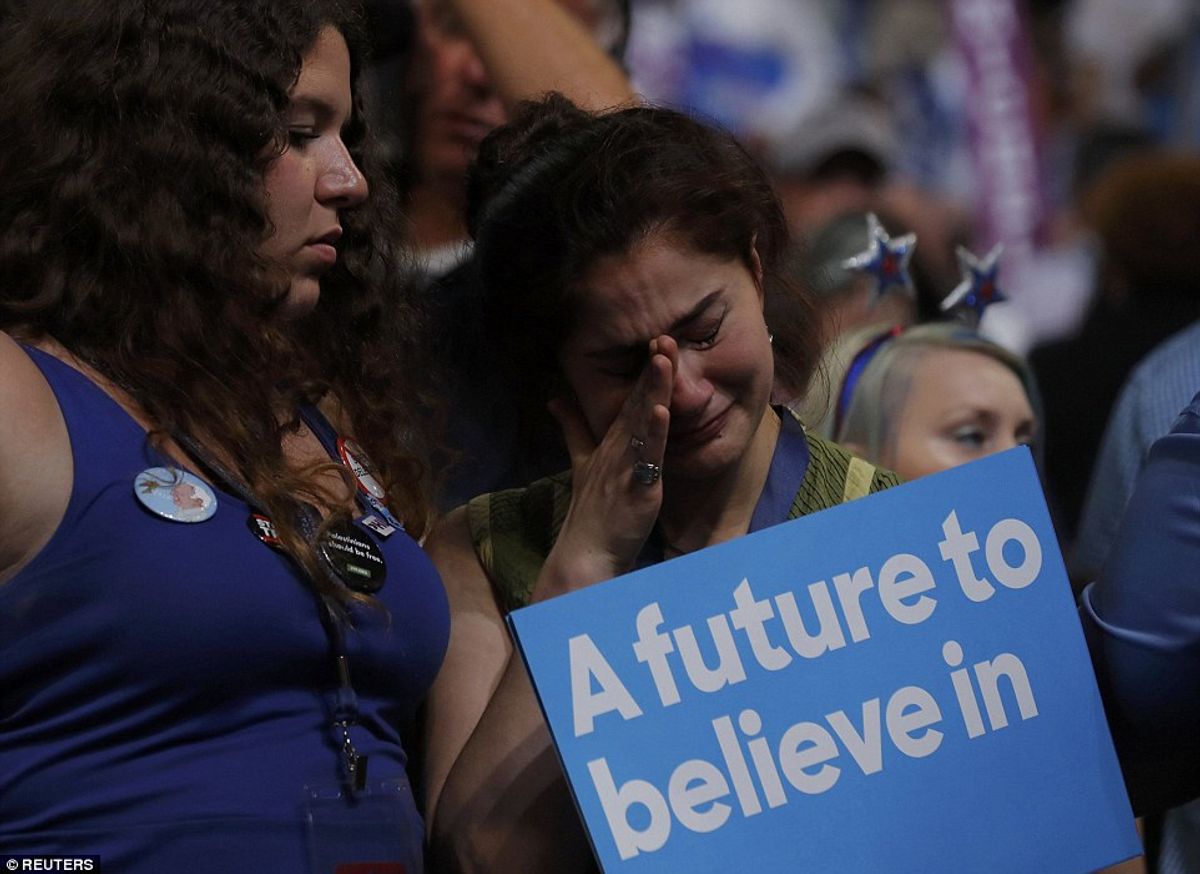 I rolled over in bed at 6am on November 9th and unlocked my phone. Headlines read, "Donald J. Trump, America's next President." I cried and I called my friends and family and I laid my head in my hands with no emotion running through my body but complete despair and defeat. This was real.

“Get over it you millennial cry babies, Trump won and you lost. Get a job, pay your taxes and move on with life.” These are the words of a man in the comment section after a muslim woman exclaimed her fear of living in this country after this man takes presidency. I was angry. We are not in despair because Hillary didn't win. We are in despair because nobody else won. The one person who many or most young women, Muslims, people of color, and people of the LGBT community are absolutely terrified of, was voted into office. People fear for their own safety.

This election has taught us so much about our country and the people who live in it. This election has inspired me, and many others, and driven me to work hard to make a difference over the next four years. Interested in what these things are? I’ll tell you.

Our future president has only allowed the racism to come to light. Racism was the subtle elephant in the room in America, but now it has become a predator, devouring everything in it’s path. New York Times posted a video recently showing the racism presented at Trump rallies. After Trump exclaims that Obama has “divided” America, a man in the crowd yells a highly racist remark, one I’d rather have you hear yourself than have me tell you. Another man went outside and told a protester that he is not a true American if he supports Muslims. During a road rage incident a white man told a black man that “America should've sent the blacks back to Africa once they realized they couldn’t do their job right.” He then started chanting Trump’s name.

2. We’ve learned that women are still not equal.

No one can convince me otherwise. When half of America is willing to put Trump’s sexism and open admission to sexual assault on the back burner because they can’t get over Hillary’s emails, I think that proves my point. There are many things Trump has said and done that shows me he has no regard for women and finds them worthless as individuals. But this article isn't to bash Trump. Trump didn’t win without votes. It’s the fact that 59 million people in America support this man and what he believes in. 59 million people giving an “a-okay” to sexual assault and objectification towards women. 59 million.

3. Gay rights don’t matter like we thought they did.

We just elected a man whose VP believes that “gayness” is something that can be cured. We just elected a man who said he will appoint Supreme Court justices who could overturn the ruling of nationwide marriage equality. People of the LGBT community are realizing now that 59 million people support two men who think that they are sick, because of who they love. This is terrible news for the gay community, after all they have accomplished.

4. Privilege is real. And it’s strong.

“Trump being president isn't going to affect our daily lives”. This comment, was probably the largest example of privilege I have seen. I’ve seen this comment so many times today. Sometimes posted by people I know. Those people are straight and white. Trump’s election has already affected the lives of minorities and LGBT men and women. If you can’t recognize that this presidency is genuinely terrifying for these people, that is your privilege speaking.

Now, after reading that you are feeling one of two ways.

If you chose A, this article just isn't for you. I’m happy for you that you received the candidate you were hoping for. Congratulations.

If you chose B, I have some advice for you.

There’s no other way to put it. “Darkness cannot drive out darkness, only light can do that. Hate cannot drive out hate, only love can do that.” MLK Jr. was right about many things. That quote being one. During these 4 years we need to love harder than we ever have. We need to show immense love and support to people who need it the most. Spread light and positivity and do not stoop to the level of hate that is being revealed in America right now.

Not physically. Not violently. Fight with love. Fight with passion. Go to rallies, go to protests, go to town meetings and government meetings. Write letters, make phone calls, and stand up for what you believe in. There is so much we can do. Whether it works or not we’ll soon find out. But if we aren’t happy, we need to try.

3. Support each other. Stick together.

Women need to stick together. Women of all races and backgrounds. We have been shown that 59 million people are okay with us being seen as less. This is a big deal. Be strong, set goals, and stick together. Lift each other up. We need to come together, white people with POC, Muslims with Christians, etc. Remember, we are Stronger Together.

Keep hope, and remember that America has been through some pretty awful times and made it out alive. We can make a difference. Stay inspired, stay motivated, and stay strong. Life works in mysterious ways. I love you all.