So, You're Not Going To An Ivy League School
Odyssey
CurrentlySwoonLifestyleHealth & WellnessStudent LifeContent InspirationEntertainmentPolitics and ActivismSportsAdulting
About usAdvertiseTermsPrivacyDMCAContact us
® 2023 ODYSSEY
Welcome back
Sign in to comment to your favorite stories, participate in your community and interact with your friends
or
LOG IN WITH FACEBOOK
No account? Create one
Start writing a post
Entertainment

So, You're Not Going To An Ivy League School

Prestige does not define the value of your education. 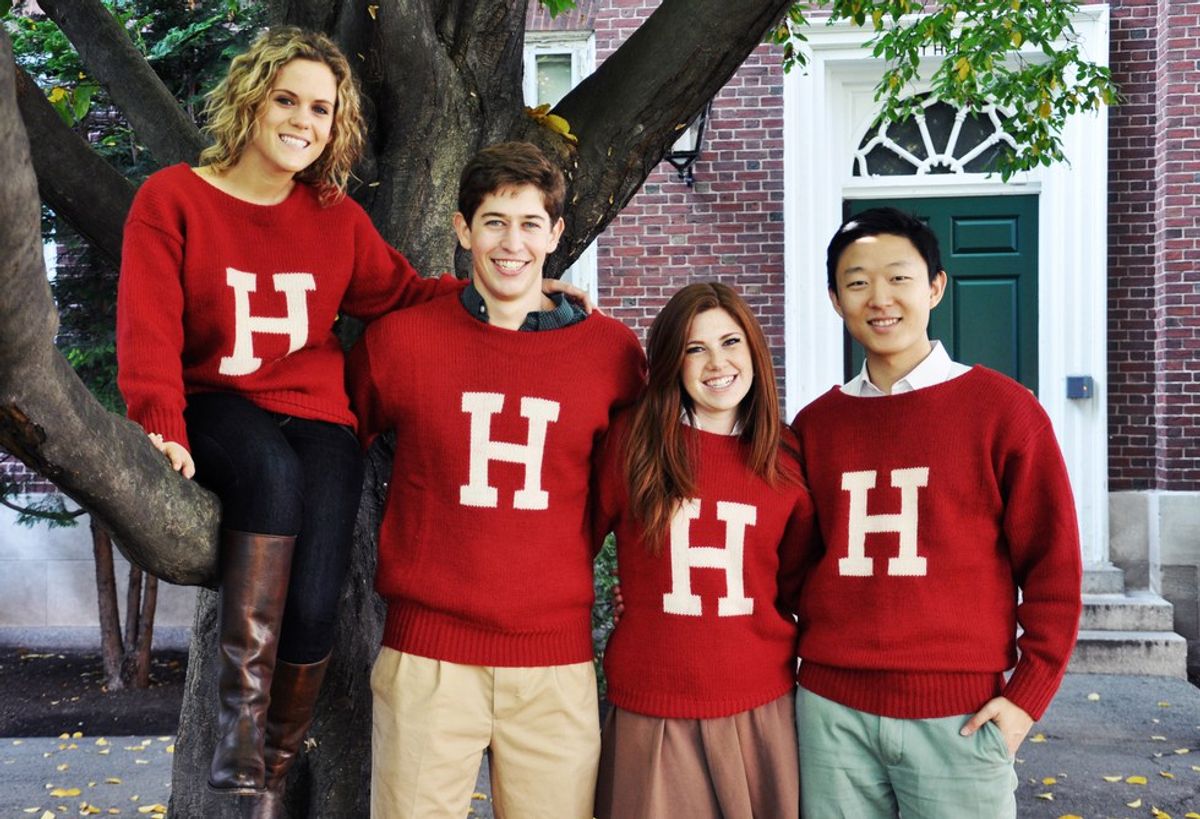 So, you applied Early Decision. Harvard is your dream and your destiny. You didn’t get in.

You’re an athlete; you’re a top student; you’re in an accelerated high school program. You’re in National Honor Society; you went on a mission trip; you aspire to advance in your field and change the world. You’re passionate; you’re attentive; you spent at least twenty hours on your application. Harvard is perfect for you. And you are perfect for Harvard.

I know, and so is every other high school senior in the United States.

Hear me out—that doesn’t mean you aren’t unique or talented or promising or that your application essay wasn’t good enough. It just means that Ivy League Schools are incredibly selective, and another applicant may have spent three years in Africa teaching children English instead of two. It means that you didn’t have the same opportunities to build your resume that someone else did, and that Ivy League Schools had thousands of opportunities to turn you down. Literally thousands, because that’s how many people applied.

I’ve spent the past couple of years reviewing friends’ application essays to schools such as University of Pennsylvania, Cornell, and Harvard. As an editor, I became intimately familiar with each person’s motivations for applying. Sometimes, entitlement sang behind the sweet-worded narratives, but mostly the lines rang with a heartfelt desire for success, happiness, and validation. Validation, in particular, motivated people to pour over essays for hours, and crushed them more than anything when they opened their rejection letters.

Who has never imagined the pivotal Facebook post: “Yale Class of 2021!”? I’ve imagined it. Although I’ve never wanted to attend an Ivy League School, I’ve considered applying to Brown or Yale because if I got in, people would be so impressed. 200 likes on my Facebook status impressed, and nobody ever likes my Facebook statuses.

Whoa, wait, hold up—did I just say I never wanted to attend an Ivy League School? -gasp- Yeah, I don’t want to go to Yale, or Dartmouth, or UPenn. Maybe I’m not confident enough to pit myself against a five percent admission rate, but I’m pretty pessimistic in general so of course I wouldn’t imagine an amazing future for myself. I wouldn’t dare dream of following Aaron Burr’s legacy at Princeton, or Alexander Hamilton’s at Columbia (kind of). I would never picture myself waltzing through Cornell’s really, really, “No, you don’t understand how pretty,” campus on my way to class. I would never dream of the perfect college name to guarantee jobs at the drop of a resume. Well, that’s not true. Of course I’ve dreamed of all those things, but I also know that college isn’t a fairy tale that begins and ends with “happily ever after.”

College is about so much more than a name or a beautiful library. You could go to the smallest, hole-in-the-wall school, and work hard and receive a better education than someone who cracks under the pressure of an Ivy and drinks her way to dropping out. Naturally, some schools will offer you a better education than others, but that has nothing to do with their names or admission rates. You need to go to the best school for you, and lots of times, that isn’t an Ivy.

Ivies are hypercompetitive past admission. On the off-chance you manage to squeeze past other applicants and be accepted to Harvard, how much undergraduate research do you think you will be conducting your freshman year? How many other students will drop their research papers to help you study for chemistry, or read the short story you wrote in your free time? How much free time will you have?

Now, I am not saying that non-Ivies are easy. I don’t attend an Ivy League School and I still work hard. That hard work is supplemented with research, though, and writing articles, and editing essays for my friends. A small school like Clarkson University has exposed me to a plethora of opportunities to build my resume, try new things, and make friends. Although Clarkson is not my ideal school (for completely unrelated reasons), I know I would rather be here than at Princeton or Yale. Because I prefer support to competition, and immediate opportunity to prestige, Clarkson is a better school for me. For someone else, Cornell might be a better option.

Friends of mine were accepted to Ivy League Schools. They are lovely, gifted people, and I have no doubt that they will succeed at UPenn or Columbia or wherever they decide to go. They are their own breed of student, though, and few other people fit that model. They aren’t better or worse than people who were rejected from Ivies; they are just different. Their schools are the best schools for them.

Ivies sift through thousands of applications to determine which students fit their institution best. When you receive a rejection letter, you instinctually fret about small elements of your application that could have screwed you over: a typo in your essay, late SAT scores (and by late, I mean submitted in November instead of in August), or an insincere recommender. Honestly though, how much weight could any of those things have carried? Among thousands of applications, other people made the same mistakes, and other people didn’t make any. People aren’t accepted to schools because their essays are technically perfect and they submitted their SAT scores months in advance, and they aren’t rejected from schools for any of those reasons either.

Admissions processes are fickle and superficial, sadly, so don’t waste your time carving out a “perfect” application to guarantee acceptance. Take time to be authentic, and trust that there is a school for you out there. Maybe it’s an Ivy, and maybe it isn’t. If you work hard and set reasonable expectations for yourself, you will succeed. Life does not end with a college acceptance. It begins with one, to some extent, so set your sights beyond a name. Look for a community of supportive, like-minded peers and professors; look for a college that has the same quirks that you do; look for a place where you can stand out and take advantage of your resources. If you’re truly motivated to advance your field and change the world, it doesn’t matter where you do it. Whether at Cornell or a public university, success and failure are both within your grasp, and I mean that in the least clichéd way possible.

Lastly, a note to parents who expect their children to go to Ivy League Schools: you are setting your kids up for failure. Please stop forcing your kids to shoulder your own dreams and insecurities. If they go to Yale, good for them, and good for you, but please stay out of their application process. Let them choose any schools they want, and count acceptances as personal victories. Let them accept rejections as personal failures, but remind them that they are not failing. They are your kids, and they need to know that your love and respect doesn’t hinge on a diploma from Harvard. Please set them up for success—not entitlement and insecurity. The world is a lot bigger than a university.

Nicole Marie Nigro
Individual Creator
9187
c1.staticflickr.com
Where to start...... Let me start with the cliche that life throws us curveballs and what we do with it is what counts.