How Impeachment Would Really Work
Odyssey

How Impeachment Would Really Work

And Why We Should Try It Anyway 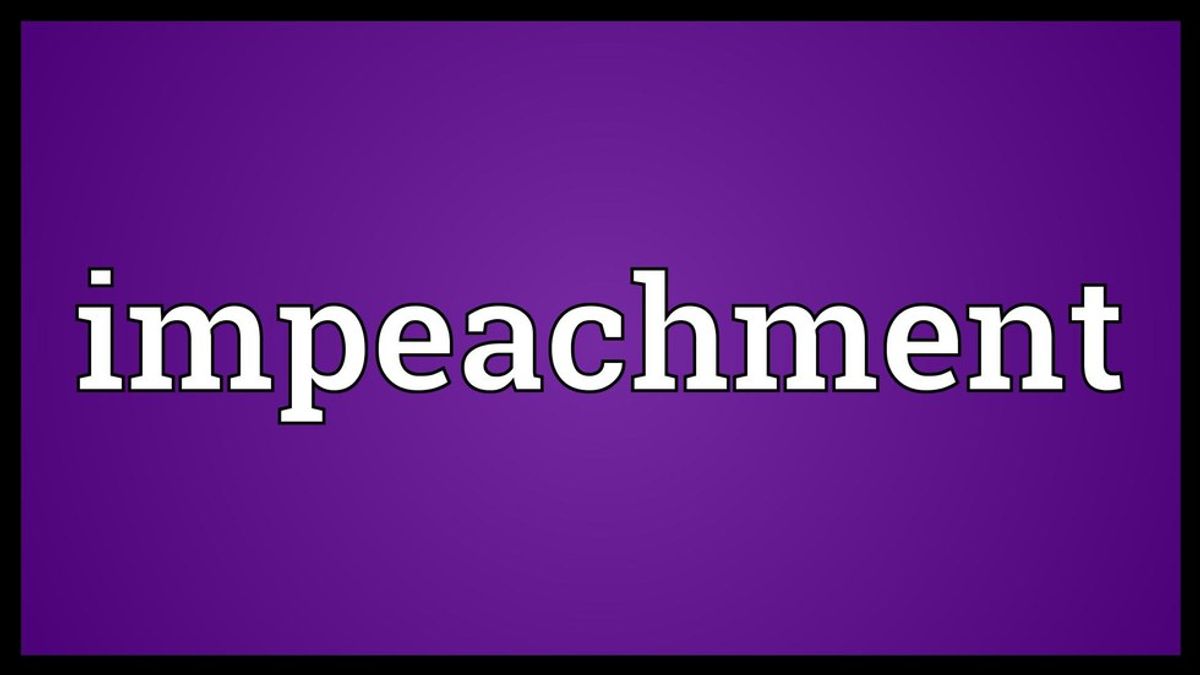 How the Impeachment Process Really Works

I’m probably preaching to the choir largely on this one, but the amount of civil and human rights abuses and lack of constitutional knowledge before he, by a feat that defied statistics, logic, and the majority vote, got to sit in the Oval Office, was enough to show me he would be a terrible president. His most recent offenses were just too much icing on the offensive cake. I’ve signed at least a couple new petitions each day and sent more than a few letters by now demanding for a stop to his policies. My Facebook friends are quite possibly sick of me sharing the links – and most of them are United Statesean.

Which also means I’m not surprised people are calling for his impeachment.

Or resignation. But mostly, his impeachment.

That would be great. Really, it would!

But what does that actually mean?

For starters, we have to consider the line of succession – and it’s a rather bleak one. First, of course, comes the vice president – Mike Pence, a perpetrator of violations against LGBT kids’ rights in particular, but ironically he has one thing more than Trump in that he was actually a governor previously. He would at least know the constitution – again, ironically.

Second comes the House Speaker, in this case Paul Ryan, who has been known to push some racist agendas, among other less-than-wonderful deeds.

Third is the Senate President Pro Tempore, a person named Orrin Hatch from Utah. Google says he’s “archconservative.” That does not sound promising.

Fourth and onward are all the cabinet members, starting with Rex W. Tillerson (state), Steven Mnuchin (treasury), and so on. From the amount of petitions I signed just to attempt to get Trump’s nominations blocked, those prospects are also looking pretty bleak.

But let’s look at the impeachment process anyway. Almost anything is better than our wanna-be emperor-in-chief.

The power of impeachment lies solely with the House of Representatives. This means that a simple majority of the House must charge the President with a crime. The Senate then acts as a court, and at least two-thirds of the Senators must agree to convict him. After that, if everything works successfully, the now ex-president can never hold a government position ever again.

So, it’s rather simple, if you ignore the part where we have to get the majority of senators and representatives to agree with one another.

Currently, both the House and the Senate are controlled by Republicans, belonging to Trump’s party. Even as some of them disagree with his policies, they seem unwilling to come all the way forward and defy him.

It’s very frustrating. I can only cross my fingers on that one, seeing as I’m from a Democratic state and city that defies Trump already.

If he and Pence agree to resign – which seems kind of unlikely seeing as Trump doesn’t seem to realize his epically low approval ratings and the immense damage his actions cause, but hey, I could pleasantly surprised – then we skip right to Paul Ryan and would just deal with a “regular” Republican who doesn’t connect to poor and minority families and most likely pushes business negotiations in spite of their existence. I figure that it would be like when Bush was president and I was in my single digits – not really helpful, but not entirely catastrophic. Some of us might even come out unscathed. We might be able to convince Ryan that climate change exists. A small victory. And then we don’t have to deal with the Congress until legislative elections roll around and we vote better people into office.

But Katherine, you silly liberal arts college student with high honors from high school you, you might say. If none of the options are really much better than Trump, what’s the point? Shouldn’t we just accept our condition and work on our own communities? Can’t we just ignore Trump’s idiocy?

Don’t trap me in a corner when the house is on fire. I believe the question you mean to ask is, “To what extent would this work?”

Trump is already working to destroy the environment, animals, women’s rights, children’s rights, LGBT rights, minority lives, peace treaties with sovereign nations (Hi, Standing Rock!), disability rights, schools, infrastructure, and freedom of religion, speech, press, assembly, and petition, not to mention he put us and millions of refugees at risk of serious danger via that Muslim Ban that only applied to, if I recall correctly, U.S. and Canadian citizens and countries in the Middle East that he didn’t have business ties to but who also, ironically, had nothing to do with terrorist attacks in the United States. Gee, way to show your cards, Trump. “Not a Muslim Ban,” my foot.

He did all these things by executive order. Only other main things he’s been reported doing are watching Finding Dory during the Muslim ban (which sounds remarkably like “playing the fiddle while Rome burned,” to me) and complained about the media reporting on him. Oh, and he promoted his daughter’s fashion line.

Mike Pence pushed for conversion therapy in Indiana (read: electrocuting gay kids in the immoral, illogical hope that they’ll “come out straight”) and Paul Ryan runs the House of Reps.

Literally, all you should need is one doctor with their head on straight to point out that conversion therapy doesn’t work and LGBT kids are fine – and here is all the evidence – and quite possibly you could knock some sense into him. Even if you can’t knock it into Pence, you would literally have the worst guy out of the way. With Trump out of the way, his entire cabinet can go with him. No more Betsy Devos. No more Jeff Sessions. No Tillerson or Mnuchin or anyone else. I don’t think Pence has to keep Trump’s cabinet. Presidents created by the death of their predecessor were not required to keep their predecessor’s cabinet. President Ford did not have to keep Nixon’s cabinet after the disgraced president’s resignation. So why should a president created by impeachment be any different? The only president who’s gotten impeached in U.S. history is Bill Clinton, but he just stated until the end of his term. Funny enough, it might technically “drain the swamp,” which is funny in a crying-pitifully-while-you’re-laughing-hysterically kind of way.

We cannot afford to accept and ignore when the lives of our children and neighbors, if not ourselves. That is suicide at this point.

So I really wish, one way or another, that Trump would leave.