How church tires us out. 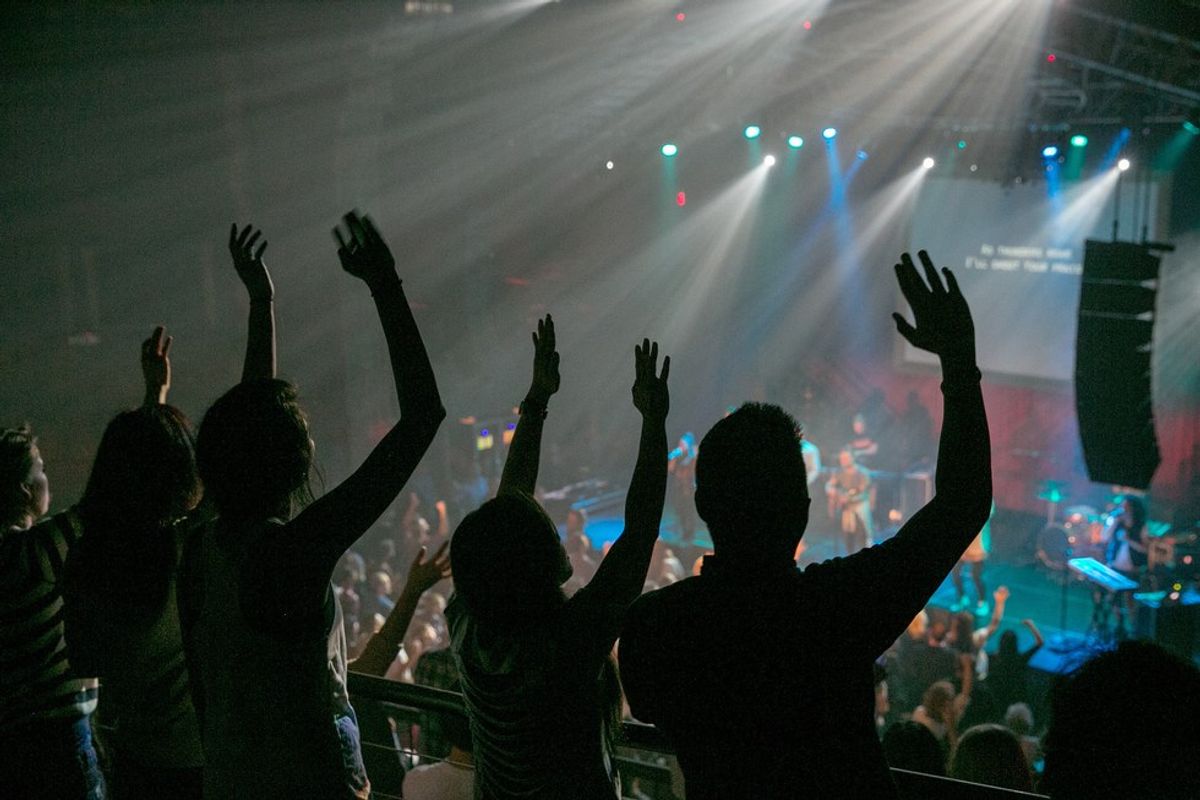 Here is a phrase I learned recently: emotional labor. The term, first coined by a sociologist in 1983, is most well-known in explaining dynamics men and women.

You'll understand what it means if you've ever had a job. If you've woken up cranky with few hours of sleep, your manager will still want you to provide service with a smile. (Hopefully, you're getting paid for it!) Even if you're recovering from a lost loved one or a bad breakup, there's a level of performance expected.

But something I've recognized recently is the ways in which Christians, specifically evangelicals, demand emotional labor from their friends and congregations.

It may seem unfair that I target evangelicals with this, but contemporary worship lends itself particularly well to performance.

The light shows, raised hands, young leaders in colorful skinny jeans, and smoke machines contribute to the atmosphere. (A church in Oregon recently came under fire for specifying that fat people need not apply to their worship band, and we all know that the average Top 40 Christian band fits the typical Hollywood standards of attractiveness.)

No matter how genuine the hearts of the leaders, it can't be denied that the whole stage is set up like a performance. Leaders rattle off "improvisatory" prayers and vocal lines that they've practiced repeatedly to nail the right inflection, in an effort to play up on the emotions of the congregation.

Critics call this manipulation, while fans consider traditional liturgy to be rigid and emotionless.

But regardless of one's preferences, the music is just a symptom of what I view as an underlying problem: everything you feel in evangelical circles must be filtered through the right words and expressions.

For example, you can talk about your feelings, but can't show them. You can admit you've been going through "struggles," but can't break down and sob or have a panic attack or say, "life sucks."

Part of this stems from natural American culture, where we expect a person to answer "how are you?" with the traditional "good, how are you?" even outside of church.

But when Christianity conforms to the pattern of this world, your response is weighted by morality.

And this makes the evangelical church even more exhausting, dishonest, and judgmental.

A person who answers "How was your week?" with "it sucked" will be seen as a weaker Christian than the one who answers "it was hard, but God's getting me through this," and everyone knows that.

Similarly, 35% of self-proclaimed evangelical Christians believe that serious mental illness such as depression, bipolar disorder and schizophrenia can be overcome through Bible study and prayer alone.

What this means on a practical level is that you must perform emotional labor, even lie, if your brain chemistry is literally unable to provide the "right" feelings.

After all, the most admired evangelicals radiate "God-given joy" so that non-Christians are attracted and ask how to have it too.

(In the link above, popular women's speaker Beth Moore acknowledges that clinical anxiety does exist, but promptly writes it off as "a lack of spiritual focus." Bestselling conference speaker John Piper prefers to call it a sin of unbelief.)

If you’re not feeling the right emotions, there's the threat of not only sinning, but pushing people away from Christianity - and, for conservative Christians, that means further toward Hell.

This is a hell of a lot of pressure.

Especially considering that 27% of congregants on any given Sunday have with depression or anxiety.

It's tiring to perform at a daily job, but worse not to be able to acknowledge your honest feelings among friends and family due to the threat that they may see you as a failing Christian, lacking spiritual focus, or even sinning.

If churches want to lose less Christians, they may want to ease off the pressure for nonstop joy, because Christianity Today reports that “The response of people in the church to individuals’ mental illness caused 18% to break ties with a church.”

Not everyone has a mental illness (apparently not Chan, Moore, and Piper), but it's still no less hard to perform the right emotions if you're just not the type of person who feels like raising their hands, jumping up and down at 9:00 in the morning, or wrapping up your testimony with a happy bow.

(You may be wondering whether mainline churches handle these issues any better. This article excellently illustrates how liturgical worship works very well for even the most devout Christians who are unable to "perform" happy emotions at church.)

If you related to anything or disagreed, feel free to comment below or share it around. I’d love to hear from you.