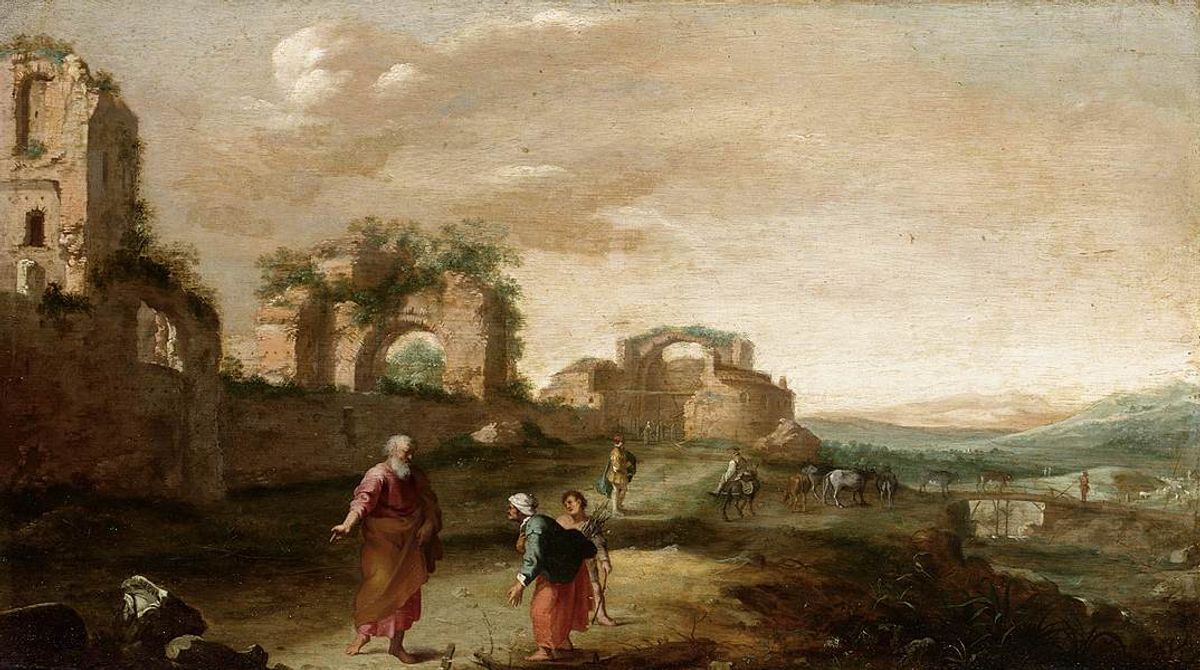 Elijah had told King Ahab there would be no rain in Israel until he said so.

Now, as he looked down at the dry, cracked earth of the brook he had been hiding by, it seemed he couldn’t avoid the drought either.

So God spoke to Elijah.

But not to say, “Alright, the drought’s over. People have learned their lesson, you’ll have fresh water on Monday.”

Nor did he say, “Good news, there’s another righteous Israelite left who fears my name, go to his home and he’ll help you.”

Instead, God said, "Get up and go to Zarephath in Sidon and live there. I’ve instructed a woman who lives there, a widow, to feed you."

Elijah must have been a little surprised.

God was telling him to go to the kingdom ruled by Ethbaal, the father of Queen Jezebel who had encouraged King Ahab to worship Baal and had more reason than anyone to want him dead.

Not only that, but God was sending Elijah to a widow, a woman with no husband.

Elijah didn’t know the woman yet, it was barely possibly she could be wealthy, but she was most likely poor.

She had lost her main financial support and in an Ancient Near Eastern culture, it was unlikely she had any inheritance or family to help her.

How would a woman who couldn’t even provide for herself have food for him too?

All the facts said this was crazy.

But Elijah decided to trust God knew what he was doing and began a long trek to Zarephath.

He arrived at the town gate, parched from his journey, and sure enough, there was a widow by the gate. She was picking up sticks from the road.

Immediately, Elijah must have known his worst fears were true.

She was picking sticks up off the street, which meant she didn’t have money to buy firewood. Just a poor woman.

Elijah approached her and asked, "Please, would you bring me a little water in a jug? I need a drink."

Maybe he didn’t want to press his luck and ask for food just yet.

She nodded and went to get it, and then, perhaps thinking he could push his luck a little more he added, "And while you’re at it, would you bring me something to eat?"

She turned back to him.

Then she replied, "I swear, as surely as your God lives, I don’t have so much as a biscuit. I have a handful of flour in a jar and a little oil in a bottle; you found me scratching together just enough firewood to make a last meal for my son and me. After we eat it, we’ll die."

This is just great, Elijah probably thought to himself. No water, no food, I’m good as dead if anyone finds me in this country, and my only hope is a widow who’s one meal away from death.

But then God told him something to say to the widow.

Something that was even crazier than everything which had happened so far.

Instead of keeping his mouth shut, taking the water and leaving, Elijah did something else.

He said to the widow, "Don’t worry about a thing. Go ahead and do what you’ve said. But first make a small biscuit for me and bring it back here. Then go ahead and make a meal from what’s left for you and your son. This is the word of the God of Israel: 'The jar of flour will not run out and the bottle of oil will not become empty before God sends rain on the land and ends this drought.'"

The widow probably looked back at Elijah for a moment, considering this.

We don’t know how long it had been since her husband died, or how old her son was (presumably he was too young to provide for his mother).

We do know she had more to lose in this exchange than Elijah did.

She had just enough food to feed her and her son. If she did what Elijah asked there may not be enough left over.

Why should she help this stranger?

She clearly had some reverence for Elijah’s God, and apparently, God had directed her to help him.

But this was her child’s fate as well her own at stake here, and she was Sidonian not Hebrew.

she had no cultural obligation to follow the Lord’s commands just because Elijah said them.

All the facts must have told her what the smart thing was to do.

But instead, she went home and did what Elijah asked.

And as often happens when we choose to trust God over our own ideas, she was blessed with even more than she expected.

I’ve always been an analytical person.

I even acquired a nickname for this trait in public school: I was the Computer.

So it’s hard for me to see that sometimes God asks us to take massive steps of faith.

He asks us to go beyond what seems safe and rational, and do whatever he tells us to.

“Forget the pros and cons list,” he says, “I am the biggest pro you will ever find."

"Forget the twenty-year plan to a good future, I will show you a future better than you can ever plan."

Forget the financial statements that say you can’t do this because it’s not viable, I will provide what you need."

"Forget how undignified you’re going to look doing this, I say you are doing what I designed you for.”

“Remember that in me, all things work together for the good of those who love me and who I call to my purpose.”

(Scripture taken from The Message. Copyright ©