A Dystopian Society: A Life Lesson

How Divergent by Veronica Roth taught me to be myself. 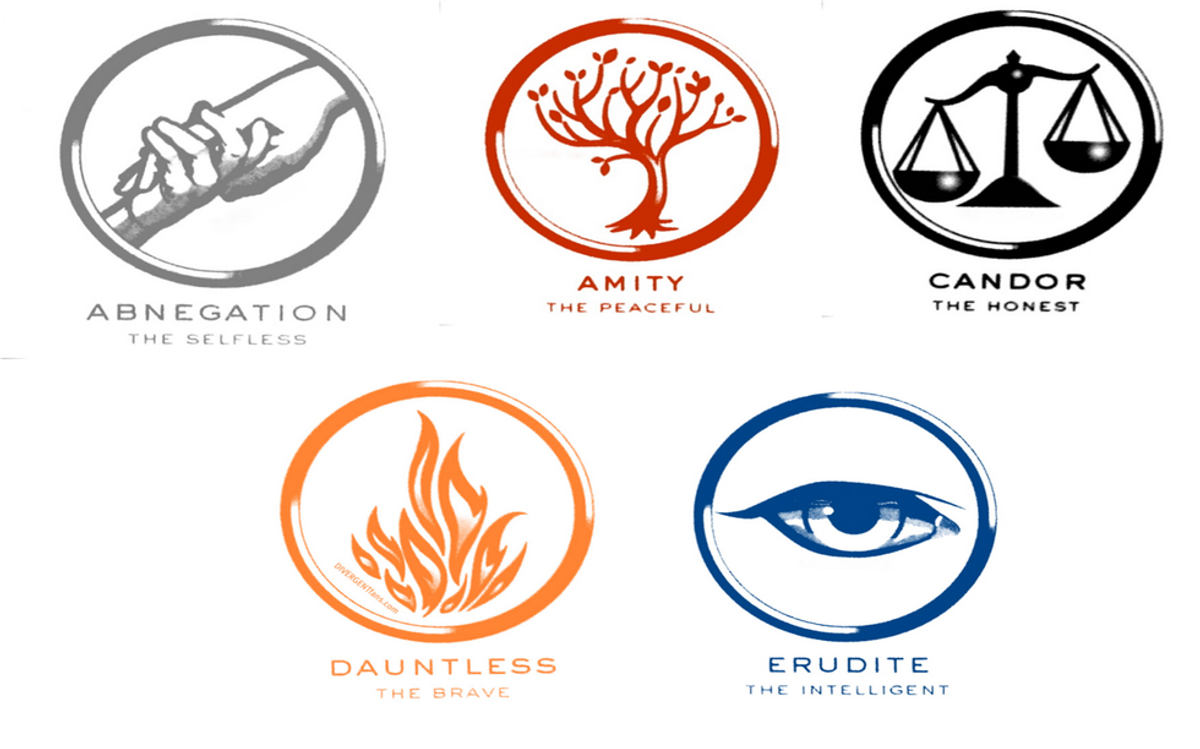 One choice can define you.

Dystopia. A post-apocalyptic city; Chicago, surrounded by a wall keeping the people of the city safe. Five factions, or groups, house the citizens of the city. The leaders of each faction say that they're lucky to be inside the wall, grateful of the protection that it offers.

Human nature, they say, is to blame for our problems. But, how is that possible? Ask the five factions.

The city of Chicago is divided into the five factions. Dauntless, Erudite, Candor, Amity and Abnegation. They each have a prominent quality, a quality that they pride themselves in. But in turn, there is a certain quality that they resent, blame for our faults in life.

Dauntless. Warriors dressed in black and ready to rumble, believe in bravery and courage. Coals and fire represent their quick-burning, hot way of life. Protectors of the city, they are strong willed and ready to defend.

"We believe in ordinary acts of bravery and the courage that raises one person to stand up for another."

Fear. Cowardice. They, in dauntless, loathe fear. If you're a coward, you don't belong. Dauntless. Never. Give. Up. "A brave man never surrenders."

Erudite, they're too smart for their own good. They seem to have brains that never ever fill up. They value knowledge, learning and intelligence. Dressed in blue, they spend their time studying and learning all that they can. An eye represents their view into the minds. They are the cities teachers, medical staff and researchers, they are in charge of delivering their information to the others.

"Erudite can tell the truth because they have the facts."

They believe ignorance is far from bliss. Human nature is their enemy. Knowledge is power and knowledge makes you stronger.

"I think human nature is the enemy. It's human nature to keep secrets, lie, steal, and I want to eradicate that. That's how we'll maintain a stable peaceful society." - Jeanine Matthews, Erudite Leader.

Candor. Black and white represent the black and white way of truth. Truth and justice go hand in hand. They work together for a better society. Truth keeps the peace, because if you lie you're just going to hurt yourself. Their honesty leaves them in charge of the judicial system. They provide a balance in life.

"At least we tell the truth" - Christina, Divergent.

Dishonesty is the end of a candor's line. Dishonesty is what makes people go mad. When you're honest, you're open and when you're open, your just. "That might be your truth, it’s not necessarily mine." - Jack Kang, Candor Leader, Insurgent.

Amity. Happy, loving, singing and sunshine. Bright, warm colors represent their loving, happy, peaceful environment. In charge of the farms just beyond the fence, Amity grows crops and raise live-stock. The tree represents their connection to the Earth and their role as food providers for the factions.

Amity doesn't despise anything. But if they did, it would be war and aggression. War, fighting and anger are what we should blame for human kind's issues. "Cruel thoughts lead to cruel words, and hurt you as much as they hurt their target." - Amity Manifesto.

Abnegation. Their personalities are as gray and boring as their clothes. Abnegation are public servants, chosen to run the government and care takers of the factionless, or those who don't belong to a faction. Being selfless makes you pure.

"No offense but I'm surprised Abnegation even eats at all. To selfish right? No wonder you left." - Christina, Divergent

If you're selfless, you're okay. Abnegation blame the selfish. Selfishness is to blame for human error. If you do not help others, you are helping yourself. "The others all call us "stiffs". We lead a simple life, selfless, dedicated to helping others." - Tris Prior, Divergent.

Four/Tobias Eaton, an Abnegation born Dauntless transfer says it well. "I don't want to be just one thing. I can't be. I want to be brave and I want to be selfless, intelligent, honest and kind."

Thanks to this three book, four movie series, I learned. I learned that I can be brave while being scared, dishonest in my honesty, learn as I go, be selfish by being selfless and be peaceful and assertive at once.

Divergent taught me that I can be brave, honest, intelligent, kind and selfless all at the same time.

Divergent taught me that only in my head, will I find a blame for human kind from something within me.