Dear OITNB: Nazis And Rapists? Not A Good Look
Odyssey
CurrentlySwoonLifestyleHealth & WellnessStudent LifeContent InspirationEntertainmentPolitics and ActivismSportsAdulting
About usAdvertiseTermsPrivacyDMCAContact us
® 2023 ODYSSEY
Welcome back
Sign in to comment to your favorite stories, participate in your community and interact with your friends
or
LOG IN WITH FACEBOOK
No account? Create one
Start writing a post
Entertainment

Dear OITNB: Nazis And Rapists? Not A Good Look

Watch season 5 before reading. I hope you'll be as angry as I am. 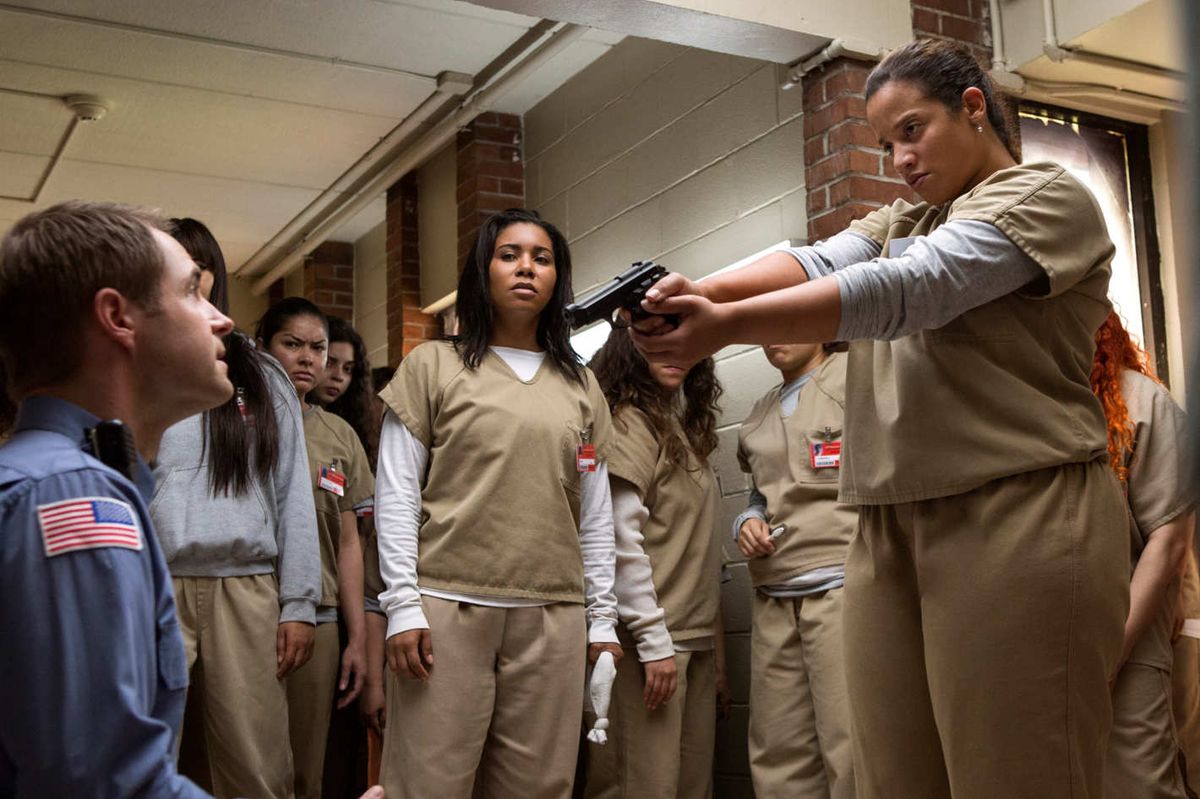 Amidst all of the backlash Netflix has received over the past few weeks over cancellation of series like Sense8 and The Get Down, Orange is the New Black just had its best season yet.

This season got down and dirty without apology by elevating its best stories and characters. Uzo Aduba continued to outshine every actress within a hundred mile radius, especially in her powerful “black is beautiful” scene that I dare you to watch without crying. Danielle Brooks as Taystee, Selenis Levya as Gloria, and Brad William Henke as Piscatella had the opportunity to bring their characters to new heights, and they snatched it. Speaking of, this season also gave us the first guard backstory that simultaneously drew sympathy while reminding the viewer the character could still be a monster, something the show botched last season with what was supposed to be a sympathetic look into Healy’s mommy issues.

All in all, this show hit in every area it set out to, infusing the season with drama, incredible acting, horror, and small little social justice jabs, including the perfect conversation on gun laws in the first episode, when every person who reports the shots fired inside the prison compares it to a recent gun tragedy: and they never had to repeat an incident.

However, in a show that has been praised for its diversity, you would think there would be some sensitivity towards racially charged and misogynistic behavior. There would have to be some sort of condemnation for characters portrayed as Nazis and rapists, at least to the extent of vitriol that has thus far been reserved for the guards. And yet, in that area is where season 5 loses its footing, turning characters who are more monster than human into quirky wanna-be favorites.

Race was one of the central themes of season 4, between the Dominican women finally finding a community of their own to prop themselves up on the power ladder, to the race war started by Piper who accidentally calls for a white supremacist gang intent on a witch hunt, to the finale closing with the death of Poussey, recalling all of the black citizens who have lost their lives to police brutality over the years, specifically Eric Garner, who died while saying the words “I can’t breathe."

After a season like that, I was ready for the Nazi girls, particularly the frontrunners Skinhead Helen (Francesca Curran), Brandy (Asia Kate Dillon), and Sankey (Kelly Karbacz), to feel some pain. And I was incredibly disappointed.

While the show never tries to hide the fact that the inmates are Nazis (well, Sankey insists on being called a white nationalist instead), their attempts to shove them in with the rest of the inmates is… insulting, at the very least. Brandy, particularly, seems fine interacting with the other inmates of color, even helping two of the Latina girls with a coffee shop for a brief amount of time. And yet, in that same scene, she openly admits to being in prison for poisoning black and Jewish people as a barista, and during one of the million times that Sankey insists she’s just a white nationalist, she points to Brandy as an actual Nazi who turns around and gives a smile that’s supposed to be… coy? Cute?

During the storming scenes of the last episode, the three white supremacists team up with some of the Latina girls again to defend themselves against the soldiers coming to round them up. It almost makes them seem like heroes, putting aside their disgusting and, at least on Brandy’s part, literally murderous beliefs in order to be just another one of the inmates.

I sincerely hope season six proves devastating for the Nazis to make up for these weird attempts to make them just a part of the big prison gal pal gang, especially in light of how the black and Latina girls are continuously treated by the guards and other prison members.

But you know what, I would take the Nazi girls being embraced by the entire prison and crowned as the heroes of Litchfield before I have to stomach another Coates(Donuts)/Doggett episode.

In case anyone has fallen for the weird romanticizing of their relationship this season, and I wouldn’t blame you since even Boo’s protests against it revolved more around him being a guard than being a rapist, Coates raped Doggett. She hated him for a while, apparently forgave him, and is now actively pursuing a romantic relationship with him, with her season ending in a domestic love scene in his home after escaping the prison.

Putting women back in bed with their abusers, especially when you’re going to frame it as a choice made out of love, is horrifying, insulting, and a slap in the face to any abuse survivor who watches this show.

I understand that people can get redemption arcs. Hell, Tiffany Doggett’s is one of the best on the show, with her best friend now being someone she would have condemned to eternal damnation when we first met her. But a rapist? Someone who commits the ultimate violence against someone else’s body besides killing them? Yeah, try harder, OITNB. There better be some sort of ulterior motive on Tiffany's part at play.

And Coates isn’t the only one who gets off on the teensy tiny issue of rape. Comedic relief Leanne (Emma Myles) and Angie (Julie Lake) force one of the guards into sexual acts, right before Angie reveals she “raped a bunch of guys” to make Leanne feel better. And what is their payment for that on the show? They also get to be heroes, burning the records of the inmates at Litchfield before being caught by the guards and forced out of the building.

Another rapist (and murderer) getting off scot-free? Pornstache! That's right, we get a glimpse of him living happily with his mom and demanding she take in Daya's child so he can help raise her. It just keeps getting better. Even when justice seemed served...

So, lesson learned: be a lovable, complicated character like Poussey, Daya, or Miss Claudette? Get some rough treatment by the show that ends in death or being locked up till God knows when. Be a Nazi, rapist, or just plain insufferable (did anyone say Piper?), you get to be a happy hero.

At least we finally get rid of Piscatella and Humps.

OITNB, if you want to continue building a legacy off your diversity and deep storytelling, you need to start doing better with, we’ll say, “controversial” characters.