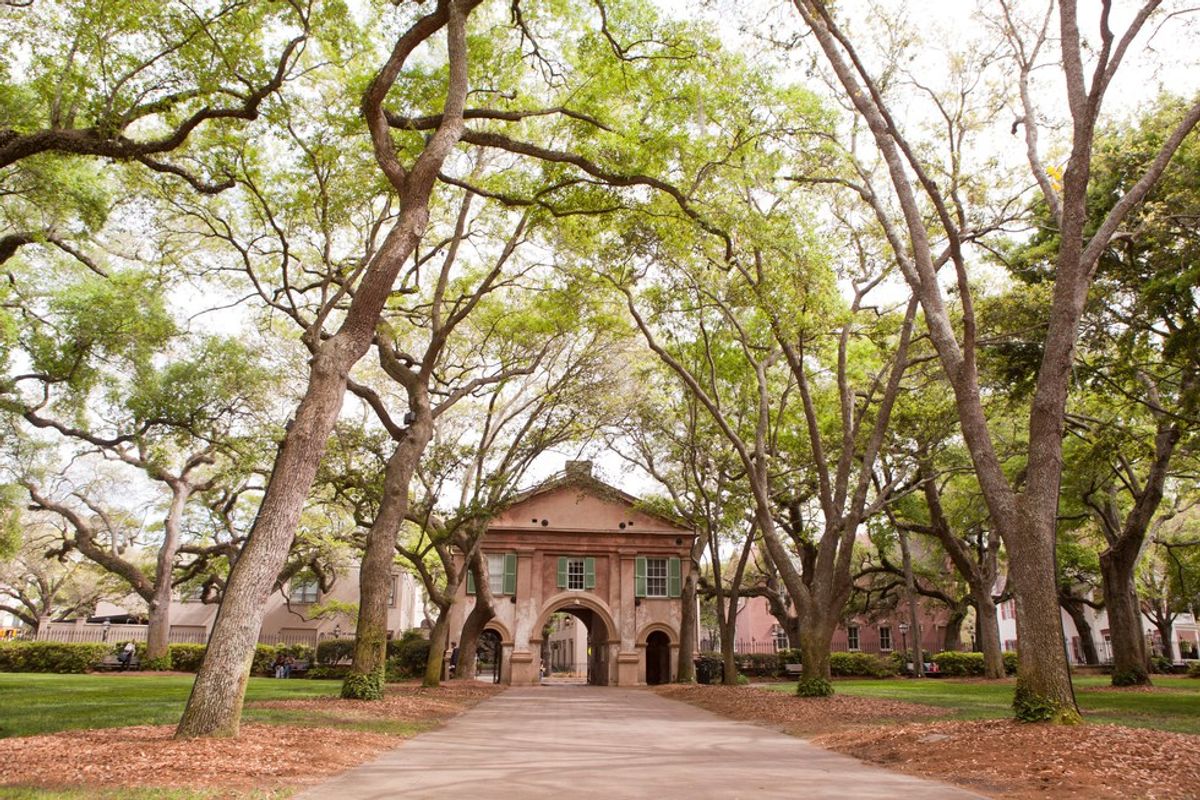 Urban Dictionary defines the College of Charleston as "not just a college... a state of mind. It is a place full of old houses, beautiful women, large bugs, and giant churches," and I don't think I can argue with that interpretation. However, there are some terms that only students who attend the wonderful CofC will ever understand. Check out a list of some of them right here.

When you trip on the uneven, historical bricks that make up of the sidewalks in the city and campus of Charleston. Everyone does it so often that it hardly phases anybody anymore, yet you still feel a sense of shame and embarrassment when you trip in front of strangers.

Marty: *comes out of the Chickfila on Calhoun and trips on the sidewalk*

An abbreviation for the campus celebrity known as Barefoot Scooter Guy. He rose to fame by riding a Razor scooter around town while simultaneously not wearing shoes. Seeing him is pretty much equivalent to seeing Bigfoot.

Kristen: Guess who I saw today!

Lauren: NO WAY! I'm so jealous!

A clever to CofC's president, Glenn McConnell. It was derived from a scene in the popular movie Mean Girls, in which Damian (dressed as Santa Clause) delivers candy grams and congratulates student Glen Coco upon receiving a whopping four candy canes ("Four for you Glen Coco, you GO Glen Coco!").

Tanner: Did you hear Charleston's president canceled all classes on campus today?

A festival that takes place on King Street on the second Sunday of every month. To most it means great food, cool shopping spots, and fun street performances, but to college students it means one thing and one thing only: dogs.

Jennifer: Of course -- when will I ever turn down an opportunity to pet a bunch of strangers' puppies?

A certain deal offered to a certain type of person at a certain pizza place downtown. And that's all I'm going to say about that.

Danielle: Man, I'm so but I don't have a lot of money.

Annie: You could always ask for the Manager's Special and get some pizza.

6. The Ghosts of Berry

The spirits that haunt Joe E. Berry Residence Hall. The Charleston Orphanage House used to stand in the exact location of the dorm's current spot, and according to stories, a fire killed four of the children that lived at the orphanage in the early 1900s. Over the years, there have been many reports of students hearing kids talking and laughing in Berry, only to find none in the building.

Charlie: Do you hear that noise? It sounds like kids singing "Ring Around the Rosie" down the hall...

Adam: Yeah, it's probably just the ghosts of Berry. They do that sometimes. It's chill.

A nickname for Jan Brewton, who is CofC's Director of Business and Aux Services, but she is better known as CofC's director of emails (most of them being about parking services, despite the fact that most students in Charleston don't even have cars).

Kyle: Oh look, I have three new emails in my inbox.

Mike: Are any of them from your professors canceling class?

An online portal that can be accessed through a student's MyCharleston account (similar to an application lots of other schools use called Blackboard). Inside OAKS lies all your classes' information such as syllabi, assignments, and grades -- a.k.a. it's your life in the form of a website.

Jerry: Did you do the homework last night?

Peter: Wait, we had homework?

Peter: Ugh, that's what I get for never checking OAKS.

A laundromat on Calhoun Street. But lo and behold, it's not just a mere place to clean your clothes, it's also one of the best restaurants . Persimmon Café is located right inside the laundromat, ready to feed you a delicious panini and some soup while you wait for your wash cycle to end.

Josh: I would, but I have too much laundry to do.

Betty: Well, how about we go to The College Laundry and eat at Persimmon?

Josh: Oh yeah! Wow, that really is a weird and convenient business idea.

Literally a window of City Bistro (one of CofC's dining halls) that's open until 2 a.m. on weekends. Popular dishes include pizza, nachos, chicken wings, grilled cheese, and more. But here's the kicker -- you can swing by late night and pick up a snack simply with the use of a meal swipe on your Cougar Card. It doesn't get much better than that, folks.

Henry: Homie, just use your Cougar Card and go by the late night window!

Greg: You, my friend, are a genius.

This word can be interpreted in a few different ways. To most non-students, it can either refer to a) the City Market on Market Street, or b) the farmer's market that goes on every Saturday morning in Marion Square. However, to CofC students, the word "market" usually means Market 159, the little grocery shop on Calhoun that takes dining dollars and cougar cash (which is a very important factor).

Rachel: Yeah! I think I have enough dining dollars to get some ravioli and a Twix.

Nicknames given to the main three local beaches: Folly, Sullivan's Island, and Isle of Palms. All three of these laid-back paradises are within a 30-minute drive or less of the peninsula, which serves as a curse and a blessing -- every CofC student has considered skipping class to go to the beach at least once, if not every single day.

A satirical statement coined by CofC about our football team; it's funny because we don't have one. But of course, the joke doesn't stop just by word of mouth -- the school created shirts for it and everything.

Allison: Is that a CofC football shirt?

Allison: I thought Charleston didn't have a football team?

When classes get canceled due to rain (shoutout to living in a city that's below sea level). Not necessarily an excessive amount of though, but rather a regular amount of rain with an excessive amount of flooding. Although lots of people invest in kayaks to get around town when we go underwater, the school isn't technically allowed to force us to do so.

Frank: It's been raining since last night, I hope we get a rain day tomorrow.

Tony: Me too. I don't feel like breaking out my kayak right now.

In the (kind of) words of Taylor Swift, "cause baby now we got ."