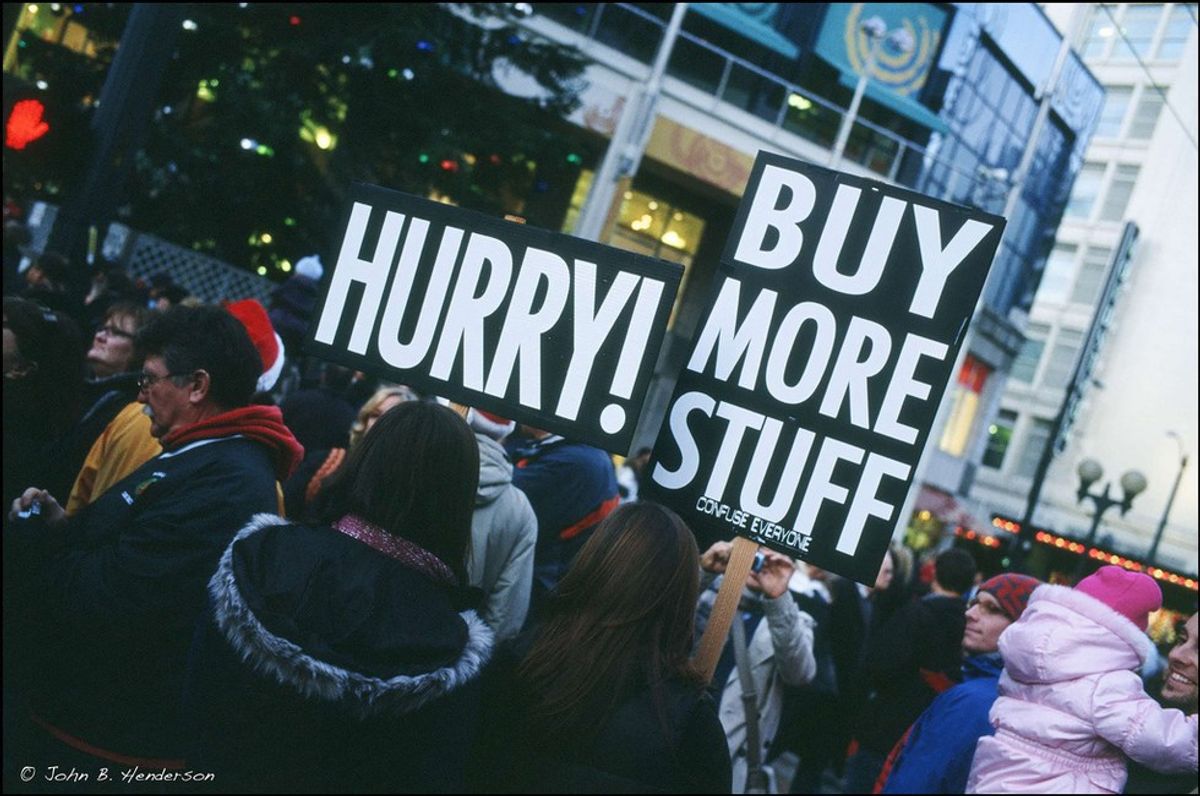 The story usually goes that “Black Friday” earns its name from retail companies’ previous system of recording losses in red and profits in black: After spending most of the year “in the red,” the holiday shopping season begins, and the companies are “in the black” again in terms of profits. However, these color-coded records are not the real origin of the name of Black Friday.

Back in Philadelphia in the 1950s and 1960s, the Army-Navy football games the Saturday after Thanksgiving were a huge deal, and suburban folks would rush into the city on that Friday. Law enforcement was overwhelmed with not only the intense crowds but also the shoplifters that would take advantage of the mass confusion. Philadelphians began to refer to this day as “Black Friday,” and this term caught on by 1961. Retailers around the nation, who had already held this day as the commencement of their holiday shopping season, decided to adopt the term as well, but with a positive spin: They’d say the “black” represented the color of their profits, rather than the stress of that day.

Since I was little, though, I’d always assumed it represented the day’s hectic nature. I saw many of my family and friends gearing up to shop, and attended a few of these adventures myself. When I went, I saw people who were deeply stressed about this ordeal. On top of that, occasionally I would hear on the news that someone had been injured or, in a few extreme cases, even killed just trying to get through the madness. Sales are awesome, but are they worth that risk? I would say no. I also disagree with the idea of Black Friday being pushed back onto Thanksgiving Day itself. That completely defeats the purpose, and it comes too soon. On another note, I do appreciate many stores’ recent spreading of the sales into later in the weekend or online, that way more shoppers can avoid the lines and the crowds.

A day filled with sales? Heck yes. But placing this hectic shopping day where it immediately follows time with one’s family and being thankful for what we already have? Maybe not. This is absolutely a pipedream, but I wish that we could change the date of Black Friday. Everyone would have more time to prepare post-Thanksgiving, refine their shopping needs, and get in and out of the madness safely. It’s super great that these sales become available for the holiday season, and I would never advocate for getting rid of Black Friday altogether. I feel a similar way about Election Day--it should certainly occur, but why on such an inconvenient date? The corporate "holiday" of Black Friday should never override Thanksgiving weekend, which is a special time with one’s family and friends—and it should never be pushed back onto Thanksgiving Day.
Report this Content

Nicole Marie Nigro
Individual Creator
8256
c1.staticflickr.com
Where to start...... Let me start with the cliche that life throws us curveballs and what we do with it is what counts.