Everyone deserves to be heard and this situation is no exception. 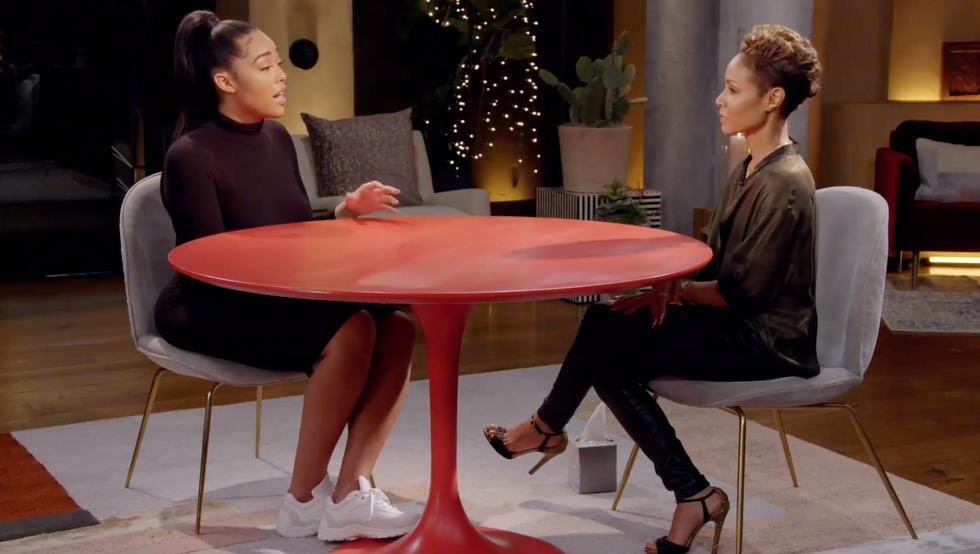 Everyone, including myself, has branded a scarlet letter on Jordyn Woods' chest since the news broke that she and Tristan Thompson were seen getting hella cozy at his home.

Jordyn has FINALLY broken her silence after nearly two weeks of keeping us in the dark about her side of the story. Jordyn discussed the entire situation from her perspective on Red Table Talk with Jada Pinkett-Smith.

As a full-fledged KarJenner fan since day one, I immediately came to the defense of the Kardashian/Jenner family putting all of the betrayal on Jordyn's shoulders. However, I have since changed my tune.

During the discussion between Jordyn and Jada, things got deep, emotional, and overall honest, in my opinion. She is talking about her situation on Red Table Talk because the Smith family has been a part of hers since before she was even born.

There were some things that were said in this special that made me feel for Jordyn. She crossed a line, yes, but she's also human and is taking full responsibility for her involvement, unlike the man who has come out nearly unscathed.

“I should have gone home after the party, I shouldn’t have even been there.”

And I think it is completely unfair that she is in the frontline taking the brunt of this blame.

"Never once was I giving him a lap dance, making out with him, sitting all over him."

After this special was live, this piece of info seems to be what's getting everyone caught up in thinking that she is a full blown liar. Hell, I'm even suspicious over this part.

But let's be real, Jordyn is a young, 21-year-old who was intoxicated at a party where she felt safe. I can see where she would think this was an innocent thing. Kylie is basically her sister, making Khloe her family as well. She wouldn't feel in this moment, that she is part of a grand scheme betrayal situation that would leave her without the people she considers family.

If you ask me, Tristan took advantage of her being in this situation and ran with it. Let's be honest, his track record isn't exactly sparkling. And baby daddy or not, he's got some issues of his own that need some serious attention.

"It's not fair that she has to deal with this either. And the last thing I wanted to do was be that person. I'm no homewrecker."

She knows that she hurt Khloe. She knows she is in the wrong for what happened. But she isn't out there talking to trash media outlets to make money or give a fake story, she came to the Red Table Talk because she knows the host, she felt comfortable telling her truth there, and she needed clarity.

At the beginning of the interview, Jordyn talks to Jada about how she "wasn't thinking" about the situation she was in and how she would've felt if the roles were reversed. Is this so hard to believe? That she felt innocent until it wasn't because he kissed her in the morning?

"I may have done something wrong, but whatever I did, I don't think I deserve this."

Jordyn says she was getting "death wishes" and hateful words on her social media accounts. Some even told her that her "dad deserved to die." She said that her family can't leave their house without attention being drawn to them as the family of the girl who betrayed the Kardashian family.

Nobody deserves treatment like this. This is the kind of treatment that leads people to hurt themselves. Jordyn mentioned that if she were a "weak" person, she would've "hurt herself" from all of the hate she is receiving.

Jordyn told Jada that when Tristan kissed her, she was caught off guard and said that she had to go. Once she left, she was in the car trying to make herself believe that it didn't happen.

This isn't the thought of someone who wanted to keep something like this a secret, it's the thought of denial and wanting to believe that your family will forgive you for your worst mistake.

"...and in my head of trying to forget that part of the story, I was like you know, no, he was just chillin'."

Jada asked if she spoke to Khloe after that night and Jordyn admitted to speaking with her and Kylie that morning. Jordyn told Jada that she told Khloe that everything was "fine" but was just admitting to being at the party.

She goes on to say that she felt like she was suppressing what happened because she didn't want to believe it and felt like she needed to "protect Khloe's heart."

I truly believe that Jordyn didn't think Khloe would never find out, I think she just wasn't ready to admit to herself that had happened and needed time to process what happened.

Overall, I think the backlash from fans, spectators, the media, etc. is all unacceptable. Not for judging what happened, but for putting the blame on ONLY this 21-year-old girl.

No matter how shocking it is because she was Kylie's best friend or because it was Khloe's baby daddy, it's unnecessary to treat a human being with so much hate.