'The Bachelorette' Week 10 & 11 Recap: Men Tell All And Hometowns In SoCal

'The Bachelorette' Week 10 & 11 Recap: Men Tell All And Hometowns In SoCal

Never have I ever wanted to ride in a fake taxi more. 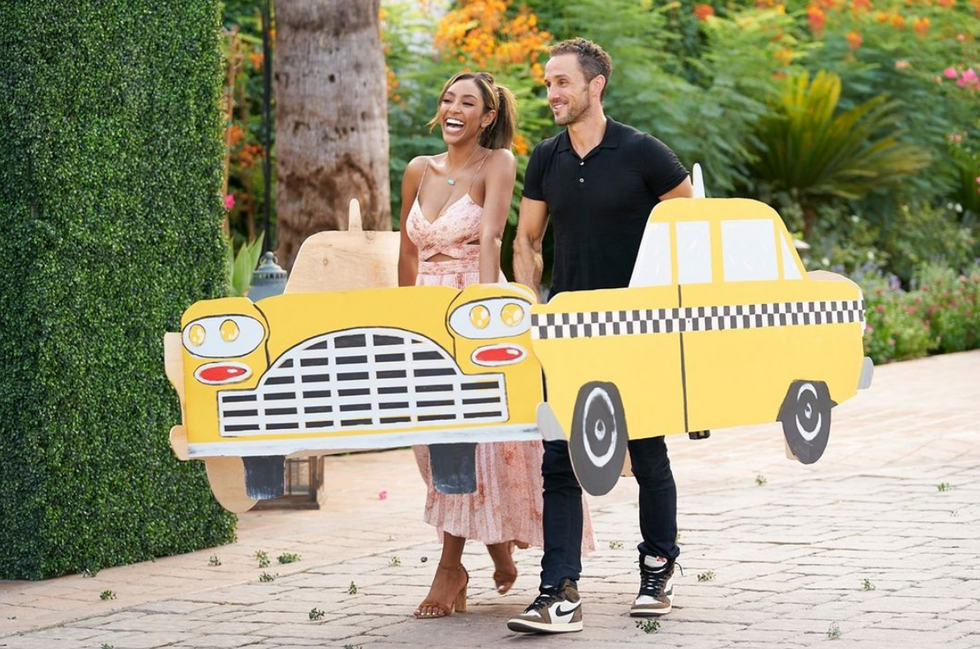 Hello and welcome back to my Bachelorette recap! Let's just jump right into this week, shall we?

PSA- Just a heads up, I didn't really take notes on the Men Tell All, as not a whole lot happened. There are two things that I remember that really stood out to me, the rest honestly doesn't matter all that much. They all just kind of yell over each other a lot, a common feat at the "Tell All" episodes.

Before we get to that, though, Blake Moynes gets his first one-on-one.

They seemed to have left the resort, which is refreshing, but it's one of those interesting hippy-dippy dates with sexual yoga. Tayshia, however, knows what she wants, and sends him home before the dinner portion of the date! I knew she would send him home, but not THAT fast! It's getting very real very quickly.

After her date with Blake, she shows up to the room with all the guys in it and pulls Riley out, and proceeds to send HIM home!

What? It's good that she knows and she's not just wasting their time, but it's not how things typically go and it's definitely leaving me, and the men, shook. These guys are praying to make it to the rose ceremony at this point.

Right before it begins, Bennett walks in, much to the chagrin of the other men, including Noah, who, miraculously, is still here! However, she nixes the cocktail party and goes straight to the rose ceremony. Those that are staying are Ben, Zac, Ivan, and Brendan. That is the best final four I've honestly ever seen in this franchise since I've been watching. I knew that going forward, these next few weeks were going to be blissfully free of drama, but full of heartbreak for Tayshia, the remaining men, and me.

Then comes the Men Tell All.

The only really noteworthy thing happening was Yosef returning from Clare's portion of the season and refusing to take back any of the insulting things he said to Clare and wishing someone would talk to his daughter the way he talked to Clare if she deserved it. I'm so furious it's not even funny. I'm not even going to give him any more time in my recap because he's not worth it. However, it was nice to see Jason's pretty face again, the guy from wayyy back who had a one on one with Clare and was really starting to fall for her.

Also, Bennett handed out some drinks to everyone and put Noah's in a sippy cup, which everyone seemed to be able to laugh at, including Noah. Anyway, we're moving onto bigger and better things now! It's time for hometowns!

Ah, hometowns. The dates are fun, but family visits are boring. Let's get into it! (P.S. I don't really write much down about the families because there's nothing all that interesting ever going on).

He, Tayshia, and his niece go to a carnival set up at the resort! It was so cute watching the three of them interact. It's really getting real for Brendan! It's so so cute.

Next up is Zac with his New York City date!

They call a fake taxi and go around doing New York City things. It wouldn't be a Zac and Tayshia date if they're not romping around in a fountain, so, of course, they make out in a fountain for a while. Zac keeps mentioning how his family hasn't seen him smile like that in so long, especially since he used to struggle with addiction, but since then has turned his life around. What a good man.

His family is from the Philippines, so they cook together! These two and their chill dates, it's so reflective of real-life and totally adorable. He speaks so highly of his brother, and it seemed like he wasn't going to be there. Then he surprises him and shows up, and stole the show for the day. He was great, and Ivan was so happy.

Finally, we have my Ben.

I actually don't remember what they did for their date, but his sister and a famous chef came to be his family? Interesting. He confessed that he loves Tayshia to his family, the camera crew, Chris Harrison, but not Tayshia! At the end of his hometown date, he just kind of stammers and it ends awkwardly. Tayshia's disappointed, as she didn't get what she wanted from him and wanted him to open up more, even though he's done it the most out of everyone this season!

The rose ceremony comes, and it saddens me to say that my Ben got sent home. As Tayshia walked him out, he didn't tell her and acted very stoic. It disappointed Tayshia a lot, but I wouldn't be too sad, girl, because something tells me you haven't seen the last of him!

On that note, it's time for fantasy suites! The end is nigh... let's see how it all wraps up! Head over to my next article if it's already up, and if not, enjoy the wait!