15 Types Of People You See On The Subway
Odyssey
CurrentlySwoonLifestyleHealth & WellnessStudent LifeContent InspirationEntertainmentPolitics and ActivismSportsAdulting
About usAdvertiseTermsPrivacyDMCAContact us
® 2023 ODYSSEY
Welcome back
Sign in to comment to your favorite stories, participate in your community and interact with your friends
or
LOG IN WITH FACEBOOK
No account? Create one
Start writing a post
Entertainment

15 Types Of People You See On The Subway

Is he actually homeless or does he just look like it? 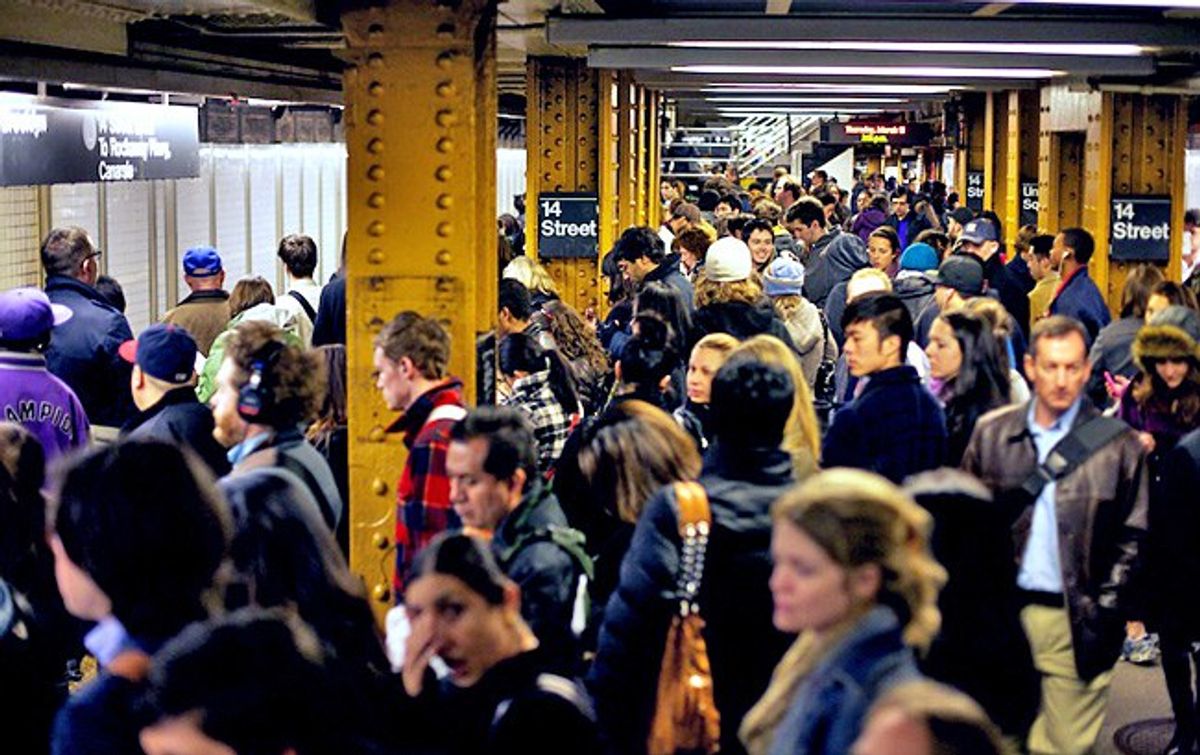 The subway is the most popular form of transportation for people living in a city, and when you take it every day to get to work, you start to notice some things. Although the actual people will change each time, the types of personalities you see on the train are often the same. Here are 15 types of people you see when taking the subway.

This person not only has their hand on a pole meant for at least three people, but they are leaning against it as well. They obviously don’t care if you fall when the train jolts forward, and they look at you as if it's your fault when you bump into them as the car shakes from side to side.

This dude must think he’s walking along the Jersey shore because a tank top that has been cut so small you can see his entire chest is not a shirt, and you might as well just be shirtless like this guy. We get that you work out, bro. Put on a shirt, please.

3. The Business Guy With A Big Ego

This guy is dressed to the nines from head to toe. His Rolex flashes in the subway's poor lighting, and he usually takes a business call right before he gets on the subway car to make him seem important. Sorry, but if you’re such a big shot, then why are you taking the subway to work instead of having a personal driver take you?

Some may think it is a compliment to have a person stare at you for the entire 10 minutes you are on the train, but I think it’s just plain creepy. What are you looking at, dude, stare at the ground like everyone else.

5. The Super Fit 20-Something Woman

Dressed in Lululemon athletic wear, with a water bottle in one hand and a tote bag in the other, it’s obvious this girl is headed to an over-priced workout class to burn off the 200 calories she just consumed in her completely organic green superfood smoothie.

This guy is dressed in grunge wear and sleeping in the corner seat of the subway car, but he has headphones in and a backpack in his lap. You ask yourself if he's homeless, but then he opens his eyes and checks what stop the subway is at. I would guess that means he just really wants some more sleep, and actually likes dressing like he has no money.

You know that guy with ripped clothes sitting in the corner, minding his own business and occasionally closing his eyes? He’s definitely just on the subway to take a break from the ever-busy city streets. It’s usually pretty obvious to identify this person because of the less-than-pleasant odor that greets you as you get on.

This guy calls for a double take. He’s so good looking that you wonder why he doesn’t sit on a throne transported by his servants carrying it on their shoulders. You think he might be famous, but then you realize that he just got really lucky in the looks department.

Notes are covering her lap and she's anxiously bouncing her leg up and down. She is looking over her resume, reading up on the company she's about to interview for and mouthing her answers to the questions she thinks they will ask. Although we might not say it, subway car 20 is silently cheering you on.

As boring as subway rides can be, this guy looks like he might actually fall over and die from boredom. He is dreading going to work, and he is already thinking about the drink he wants to order when he goes to happy hour at the bar down the street from the office.

Subways are not the place to get mad when someone enters your personal space bubble, but this guy takes it to a whole other level. If you’re lucky and the car isn’t packed, you could get an entire pole to yourself, but this guy decides that he wants to share your pole even when the one next to you is wide open. On top of that, he’ll stand unnaturally close to you, that you might wonder if he’s trying to steal something in your bag.

This guy doesn’t always make an appearance on your morning commute, but you’ve definitely seen more than one of these while taking the subway. Whether he is singing, dancing, or doing tricks on the pole, I can guarantee you he will go around asking for money right after his “show.”

If I can hear your music over the sound of the subway roaring down the tracks, and I have headphones in, then I worry for the state of your eardrums. You obviously have gone to too many metal concerts and may already be half deaf from the bass of the speakers, but having your headphones blasting music at top volume is not fun for the rest of us.

14. The Too Cool To Hold The Pole Guy

This person apparently thinks that have good enough balance to not fall when the subway jerks back and forth, but no one has that much talent, bro. Just suck up your pride and grab the pole. If not for you, then for the rest of us because we are tired of you stepping on our feet when your balance fails you.

It's 8 in the morning or 6 at night, and all you want to do is get off the subway car. Being crammed by people in a place filled with germs is not my idea of fun, and I literally count down the minutes until I can jump off the train and return to the comfort of my tiny apartment.