11 Songs by One Direction Everyone Needs to Listen to

Ok One Direction, you can come back now, very funny, pls come back :( 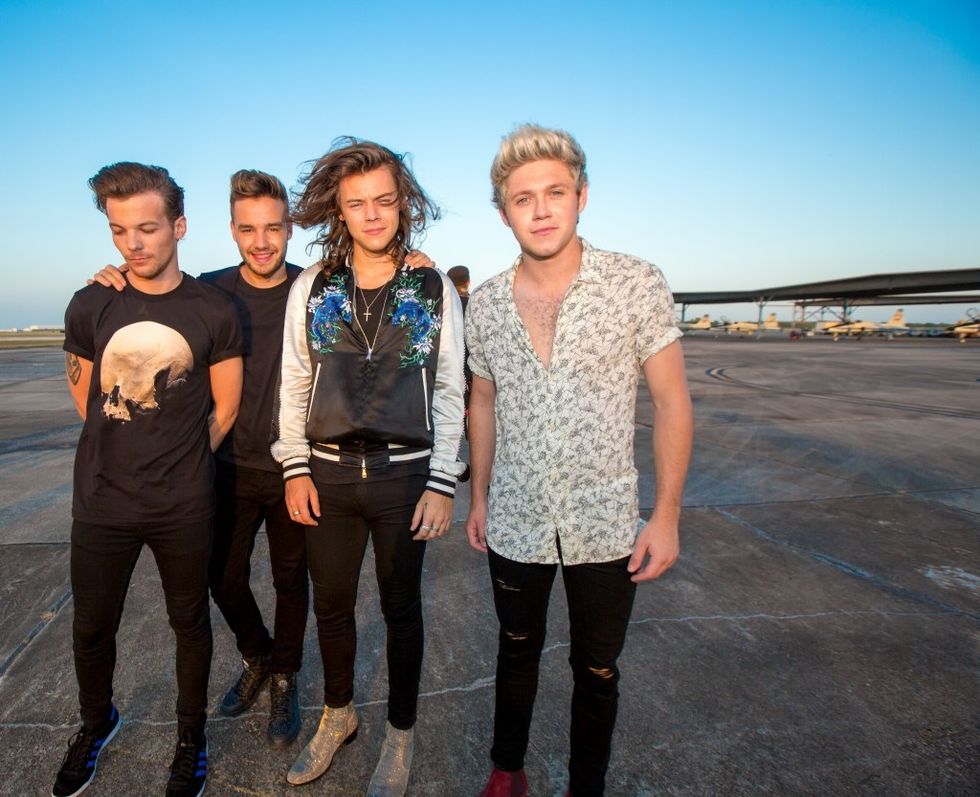 Now that the Jonas Brothers are back, which is a huge thing from my childhood, a lot of fandoms are calling for their faves to come back, and they will always have a special place in my heart, but the ones who have always had a bigger, more impacting, and slightly painful place in my heart is the one and only One Direction.

I've been obsessed since about 8th grade, and from the moment I heard What Makes You Beautiful and watched all of the video diaries, I was hooked.

As everyone knows, they were a fivesome for most of their career as a boyband, but on March 25th, 2015 there was a Facebook post, a tweet and whatever form of communication One Direction used with their fandom released that Zayn Malik has left the band and Harry, Niall, Louis, and Liam will continue as a foursome.

After an album release, some promo, and TV performances they announced that they would be taking an 18-month break (HA).

Well, to somewhat cure my constant One Direction depression and hopefully some other people who are also suffering this deep longing and depression for them, here are some songs that were TOTALLY looked past as really good songs. Some were played on the radio because as a collective fandom we raided the mentions and Direct Messages of the radio show (hosts) on Twitter. We were even incessantly calling them to play the damn songs. Okay here they are:

A funky pop song that sounds totally different from the bubblegum pop that they released, and had very little writing on their debut album. This song is on Made in the A.M. (2015) which is their most recent album (even if it's 4 years old). I've listened to this song quite a number of times and it still feels like the first time I listened to it.

I'm trying not to be bias right now even if I am very advanced in this band's history and discography, but this is one of their best songs. This song is on their fourth album called FOUR, yes very clever right? Anyway, this song is also a very different sound from their first album, and all five members- yes I said five because Zayn was still in the band when they made and toured this album (2014)-wrote on it. It's still pop, but there are a lot more added elements, different levels of voices, and more instrumentals. Just listen to it, trust me.

This song, also on their 2014 album FOUR, is more slow and a bit of a ballad. It's elements are sweet, acoustic, and patient. When I first listened to the album in 2014 (I was 16 and therefore did not really have the taste in music I do now), I didn't like it because it wasn't like their previously recorded songs, and I didn't appreciate it. I started liking it once I heard it live though, and I fell in love with the whole album all over again

This song is on my favorite album of One Directions, Midnight Memories (2013). This song is a bit more bubblegum, but don't get too stuck on that (no pun intended) because it's just as sweet as the others. It's a little upbeat and very innocent, nostalgic of teenage love, and overall very catchy.

5. Walking in the Wind

This song is tied for my favorite song between a song on FOUR that I'll also be telling you next. Walking the Wind is probably one of the deepest songs they've written and I really wish it was paid as much respect as History or Drag Me Down. This song is on Made in the A.M. and it's sort of a ballad to the fans, as the whole album is. The lyrics in the chorus are "And you will find me, in places that we've never been, for reasons we don't understand walking in the wind" and then a line in the bridge is "And I know we'll be alright child, just close your eyes and see, and I'll be by your side anytime you're needing me". At this point they knew that they were taking a break as a band from making music and they wanted to dedicate their last album (hopefully not forever) to the fans because they know that we will miss them.

No Control is on their fourth album FOUR, and this is the song that ties with Walking in the Wind as my all time favorite One Direction song. Both of them were my favorite song ever at one point or another, and they will still remain in my favorites. No Control was actually on the radio when they were touring their last tour because everyone in the fandom thought it deserved a lot more because it wasn't originally a part of their set list at all for tour,and we campaigned for it so much that radio hosts got a hold of it (because we were borderline abusing their DMs and phones with messages). It finally got added to the set list and everyone went insane. Okay so about the song, its kinda dirty for a One Direction song, but the tempo and vocals are so good so we HAD to love it. It's upbeat and so fun to sing at the top of your lungs anywhere and everywhere.

"Is Olivia even a person; is Olivia an emotion; is she a place? we don"t know" (that's in an interview they did). My dad describes this song as Beatles-esque. I made him listen to the entire Made in the A.M. album one time and that's all he had to say. Not a bad thing, though. Everyone likes the Beatles. The bridge that says "when you go and I'm alone, you live in my imagination" also sounds like Willy Wonka's "in a world of pure imagination". It has a lot of instrumentals and it's also very sweet.

Okay this song makes me so sad because it's so pure and warm. This song wasn't on an album, but it was on the Perfect E.P. This is also on the top of my list of all time fave 1D songs. The tempo and beat is very simple, but the lyrics make this song so special. It's not quite slow, but also not quite fast and it's a perfect combo of wanting to make you sob and smile.

Through the Dark is on my favorite 1D album so basically every song is wondrous and perfect to me. But this guitar-centered, more of a fast beated song is also about love (shocker), but this song live is also amazing. This is also one of their first deep songs, and I think they, as a band, excelled in lyric-writing and I think one of the reasons why they were so overlooked in the beginning (or ever) by anyone who isn't most likely a teenage girl, is because of their early stages and the fact that they were labeled as just another boy band when they really did have good music (Am I being biased oops).

One of their most simply produced, but they really hone in and focus the listeners on the vocals and the lyrics. This song was actually the one that is mostly known as being the song they wrote for the fans. It's a peaceful and simple way to thank their fans and I would much rather have that then a tweet, or a shout out at a music awards show.

If I had to describe this song in one word, it's Niall, which translates to happy and fun. It sounds like Niall had a huge part in this song because of the happy and upbeat vibe that you get from it. There's not much too it, except it's super fun to dance to and even just jump up and down with your friends. You can find this song on their fourth album FOUR.