You're With Us! Creating Inclusion At Endicott College
Odyssey

You're With Us! Creating Inclusion At Endicott College

YWU! creates inclusion opportunities for young adults with disabilities on college campuses, and Endicott College is one of the largest, most involved in the program! We are very grateful for the coaches, teams, mentors, staff, and students that have made Endicott a home for YWU! 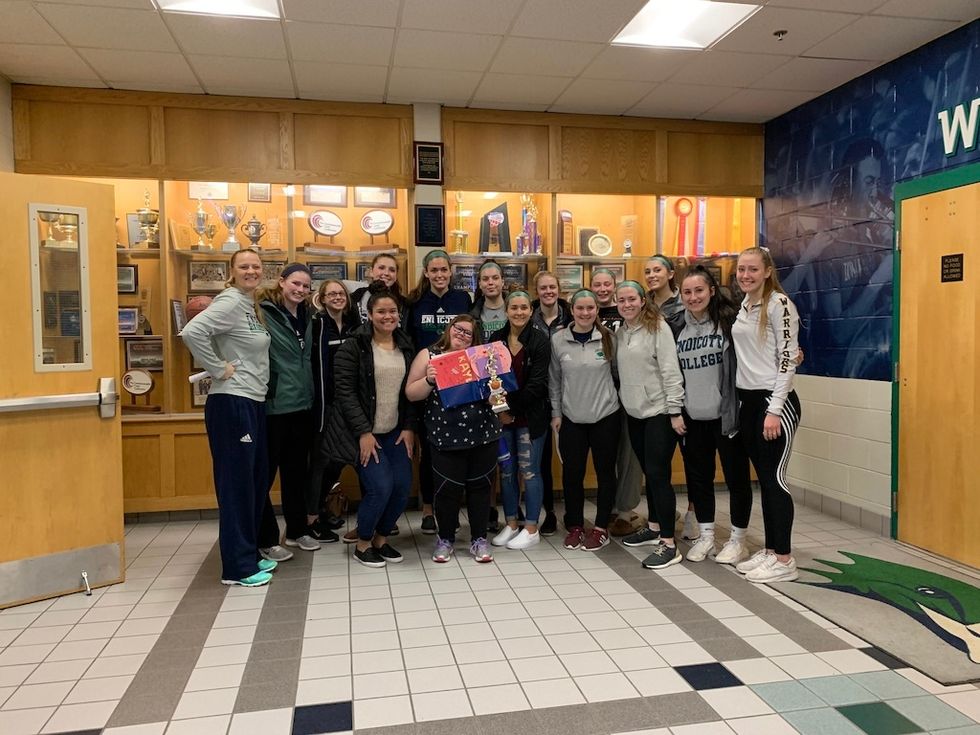 Have you ever felt like you didn't belong just for being 'different?' Maybe you were simply with people older than you or had different interests than the people around you, so you felt excluded.

Now imagine having a disability and being seen as different because of something you can't control. You may not be able to do everything your peers can, but you'll still want to feel like you belong with people your age, right?

You're With Us! was created first for Max, a young boy with Cerebral Palsy. When Max's father, Michael Plansky, saw his son feeling isolated and depressed, Michael wanted his son to have an opportunity to be around others that weren't available to him previously. Michael asked the coach of Northeastern University's Men's Basketball team if Max could go to practices and some games, making him a part of their team.

This experience gave Max lasting friendships, taught him about winning and losing, and brought the biggest smiles to his face. Max was the first; now this experience is felt by about one hundred young adults with disabilities on about twenty college campuses.

Endicott College, one of YWU!'s largest college campuses, has about fifteen individuals with varying disabilities involved on their campus along with fifteen Endicott student mentors spending time with them on a weekly basis. Endicott's Men's Basketball, Women's Basketball, Women's Soccer, Men's Volleyball, and Dance Team have welcomed YWU individuals to their teams.

Brett has been welcomed by Endicott's Men's basketball team for four years. He attends every home game the team has and shows fire and love for the team and basketball, whether they win or lose.

Kayla, who has been a part of Endicott's Women's Basketball team for two seasons, has grown so much since getting involved. Coach Brittany Hutchinson loves the impact that Kayla has left on the team, showing of "seeing who people truly are." Multiple players gave reflections on the season upon its end including Kayla's involvement with the team, both on the bench and in the locker room. Both the coaches and players adore the smile Kayla brings to their faces. Kayla's mentor, Bridget, feels that being a part of You're With Us! Has shown her just how crucial it is for those with differences to be included in their communities. YWU! has shown Bridget just how important inclusion is and has helped Bridget find her future career path: giving individuals with disabilities the same opportunities in life as their able-bodied peers.

Endicott's Women's Soccer team welcomed Yeanna onto their team four years ago and have seen such growth and change in her. Yeanna has been given the 'traditional' college life by going to campus on Fridays where she attends college classes, soccer practice, and eats at the college dining hall. She has developed into a more vocal, confident young woman both on and off the field. She assists in making team drills and team activities. Coach Jodi Kenyon states that Yeanna has done so much for their team: "Her presence with our team serves in several capacities but the most identifiable one for me is her ability to keep our team focused in games and in life, teaching them valuable lessons far beyond the playing field and wins and losses." You're With Us! is not only an experience for the individuals but the team as a whole.

Endicott's Dance team has been involved with YWU! for years; however, last semester they added a new member to their team, Gabby. Gabby's friends from the Dance team said "when we first met Gabby, she stood up at the front of the classroom ready to learn dance. More surprisingly, she was such a fast learner! She persevered through learning new skills. At basketball games, she performed sidelines with us and looked like she was having the time of her life." Coach Nicole Sao Pedro-Welch admires Gabby's willingness to try new things and jump onto the court with the team at games. Not only is Gabby able to learn from the team, but the team is able to learn from Gabby too.

In our four years, You're With Us! has created these lifelong experiences for individuals on college campuses across Massachusetts and in surrounding states. Our goal is to change the perception of disabled young people who believe they are excluded by helping them become part of their communities centered on the activities that they enjoy. In turn, their new peers in these communities, who may have thought of children with disabilities as different, now find them to be friends, teammates, and family.