The Boy Scouts is dedicated to raising leaders, not followers 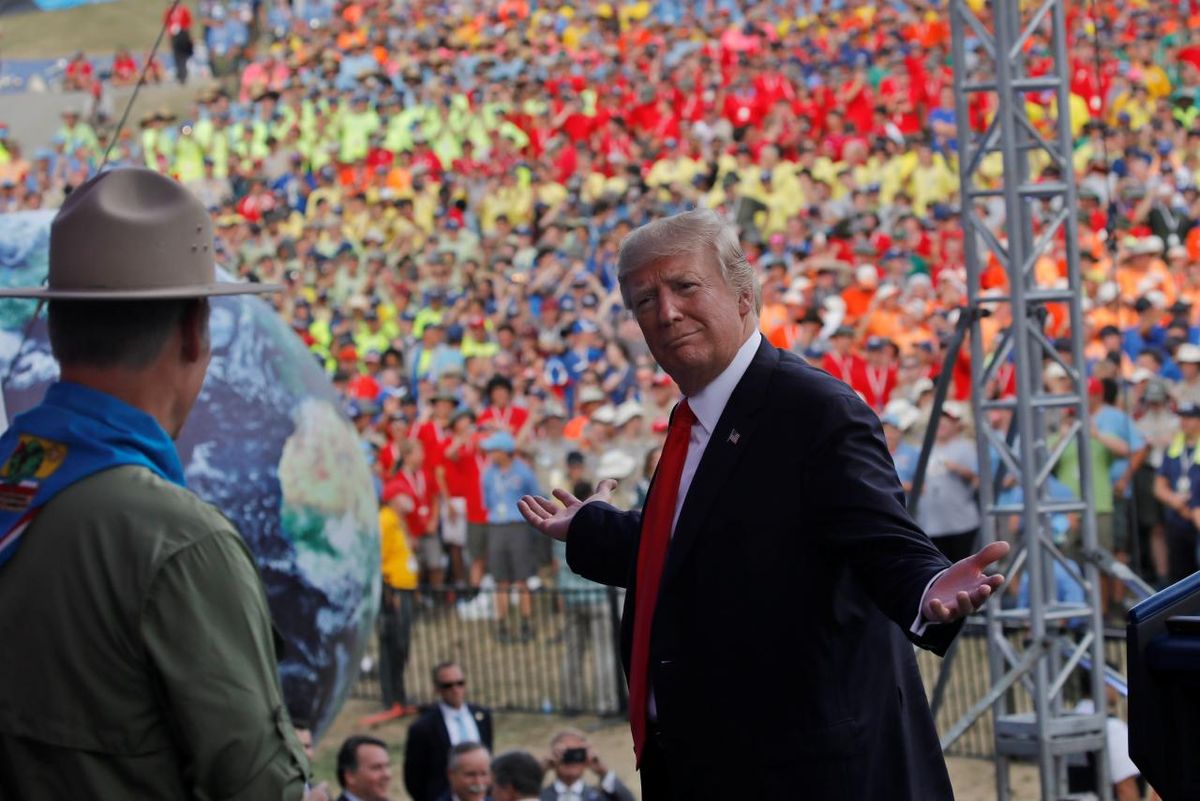 The Boy Scouts is supposed to be a group founded on the pillars of brotherhood and honor, not hatred.

Donald Trump addressed Boy Scouts from around the country at the National Scout Jamboree, but it was not because he admires their integrity as a group. He was there to hold a rally in his honor.

He called his win in November a tribute to “you," referring to the Boy Scouts, regardless of the fact that the Scouts did not endorse Trump as a candidate, as they later clarified in an official statement. Trump was not invited because the Boy Scouts admire him or his policies, but because sitting presidents are always invited to the Jamboree.

And they should. The Boy Scouts, just like its sister organization, the Girl Scouts, is supposed to be raising children into the kind of adults that become ambitious, compassionate, strong and intelligent leaders. The president of our country is supposed to showcase the best of the best and, regardless of my opinion on our sitting president, I can respect their desire to invite him.

However, Trump’s time on stage should have been spent talking about the Boy Scouts, their accomplishments and the kind of men they should aim to one day be. Instead, he used the time to push his particular political views onto impressionable young boys in the presence of the most powerful person in the country, although arguably no longer the most powerful person on Earth.

He not only made a strange comment about needing to get rid of Obamacare, he called out for one specific Senator, Shelley Moore Capito, to get on board, mirroring his threatening of a Senator on the subject of healthcare earlier this month.

Trump did, at some points, talk about Boy Scout values, but he kept breaking his stride with comments about fake media and bragging about his own November win. All he had to do was praise and encourage a group of hardworking boys, but he was too distracted by his own ego.

He made parents angry with the rally and there are men requesting their Eagle Scout status be pulled to end their association with the organization.

Here’s the ultimate problem with this entire situation: Donald Trump does not seem to have a message outside of praising himself.

But no. Instead, he again used his time to spit dirt on his “rivals," Obama, Clinton and the free press (bashes against which elicited cheers from the crowd). He pushed his political views into a speech that is supposed to be free of that kind of influence. He stared down a group of boys in awe of the position he holds and told them what to think, not how to think.

Trump’s campaign rhetoric is all about identifying problems instead of celebrating solutions, and that is what he was teaching the Boy Scouts to do. He kept giving them scapegoats for their problems, instead of encouraging the critical thinking and leadership Boy Scouts have always thrived on.

Trump violated the Scout Law and tried to use his beefy position as president to cultivate bright young men into devoted followers of rhetoric many of them cannot completely understand.

There was no message for them of change or of hope or of love. Trump simply did what he does best: painted a picture of a world descending into chaos and posed himself as the hero to save it.

That is not what the Boy Scouts needed to hear. They learned nothing about themselves, their country, or the role they have to play. They learned to hate the people their president hates and support whatever their president supports and it is dangerous to hijack the thinking skills of children in such a vicious way.

Donald Trump, as a Girl Scout, an older sister to a Boy Scout and the niece of two Eagle awarded Boy Scouts, I am appalled. Your rhetoric has no place in the organizations that taught us about living a life of service, strength and devotion to this country and the people in it. We have never thrived on hate and we are not about to start now.

I am happy you are not an actual Boy Scout. You would dirty the name and the law. There is no place for you in the BSA ranks.