The Evolution Of Barcelona Street Art 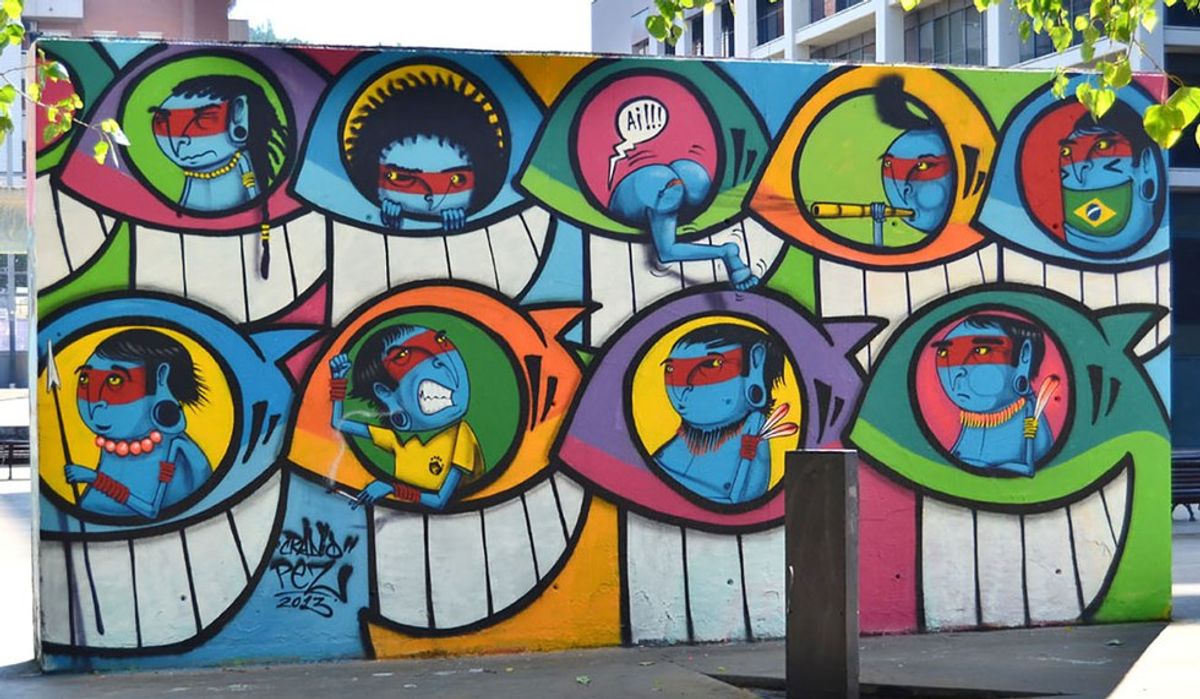 Street art in Barcelona is vibrant. It’s colorful. It’s wild. It’s everywhere. Graffiti covers the exterior of trucks, shopkeeper’s shutters, side streets and stop signs. but as unregulated and unruly as the craft appears to be, there is a certain etiquette that the graffiti community must follow.

Rule number one: don’t cover someone’s work with your own. However, breaches happen all the time because sometimes an artist is young and foolish, or the mural wasn’t good enough to keep around, or because the perpetrator had with the artist and wanted to give him a big “fuck you”. An artist whose work never gets tagged by someone else's shows that he is well respected by the street art community.

Rule number two: “You should always ask permission to take a picture of a graffiti artist when he’s ” says Mike, a tour guide for Barcelona Street Style Tours “or they might end up with a fat fine”.

An artist faces immense danger when he holds a spray can in public in the dead of night. In Barcelona, a graffiti writer can be fined up to 3,000 euros for their art. The city council considers street art to be something that holds no purpose other than to vandalize the streets with its distaste, but others admire the colorfully painted walls that ooze with creativity and provoke introspection with their social commentary.

"Graffiti is not the lowest form of art…The people who run our cities don’t understand graffiti because they think nothing has the right to exist unless it makes a profit…They say graffiti frightens people and is symbolic of the decline of society, but graffiti is only dangerous in the mind of three types of people: politicians, advertising executives and graffiti writers," English graffiti artist wrote in his book, and Piece.

“The law regards graffiti as something that soils the public space, devalues our heritage and visually degrades the urban fabric,” a city spokesman told The Guardian.

But the imposition of new laws in 2005 prohibiting street artists to decorate Barcelona with tags, and murals might not inhibit their artistic motivation.

“I don’t think the laws are ever going to stop the graffiti movement because there’s something mischievous about doing something you’re not supposed to be doing. Now there’s this rush of adrenaline that artists feel when they create something, and that high is addicting” said Mike.

C. Berkeley professor Greg Niemeyer once said, “Graffiti is a life force in a city, that says to every citizen, I'm alive, the city is alive. A city without graffiti is like a field without flowers.”

So why is the government so intent on plucking the flowers of Barcelona, a city that was once referred to as “the mecca for graffiti” where artistic restrictions never and painters were free to express themselves and communicate their frustrations, successes, and opinions with their neighborhood?

Graffiti emerged in Barcelona in 1975 after the death of Francisco Franco, the Spanish tyrant who had suppressed Catalan culture for the entirety of his reign. Upon his burial in the Valley of the Fallen, Barcelona entered a countercultural movement called The Madrilenian Scene, or La Movida Madrileña, characterized by freedom of expression, recreational drug use, and an uplifting sense of liberty and repossession of Catalan culture.

And thus, the Bohemian Culture was born and nurtured by writers, photographers, painters, singers, and graffiti artists. Barcelona graffiti really exploded in the 90’s with the influence of MTV and the hip-hop culture overseas in America. In 1992 painting public walls criminalized in the effort to clean up the city in preparation for the Olympics.

Of course, that didn’t stop the movement from growing. In 1994 two young entrepreneurs, Jordi Rubio and Miguel Galea, changed the graffiti industry when they created Montana Colors, the first store to sell a spray can that met the needs of graffiti writers. The fame and success of their store helped promote the cultural revolution spreading across America and Europe.

Barcelona enjoyed its golden years of graffiti from 2000 up until 2005 when tourism began to boom. In order to attract more investors and tourists, the government imitated New York's 1990's Times Square , which was allegedly accredit to Rudy Guiliani. The former mayor of New York used the "Broken Windows Theory" to reduce the high rate of crime in Manhattan. The theory was created by James Q. Wilson and George L. Kelling who found that crime begets crime, and minor criminal acts lead to larger ones. Graffiti was thus considered to be a gateway to grander misconduct, and thus it became the government's goal to remove it from from the premises.

The irony behind this strategy to remove street art lies in its inception. When graffiti emerged in New York in the 1960's it was used as a way to protest urban policies that failed to prioritize certain parts of the city, like the Bronx neighborhood. Citizens living there felt the quality of their life deteriorating. They translated feelings of abandonment by the state into feelings of rage, which they expressed through graffiti. And so, ironic to say the least, urban planning, the catalyst of the graffiti movement, is what then attempted to remove it without addressing the underlying social and economic problems behind it.

However, upon seeing the success of Guiliani's project, Barcelona followed his example. But what the government fails to understand the essence of street art, its and soul, is that it is a form of . An artist will not put down his spray can because he is told to by the law; he will be inspired by the new social injustice to paint even more to communicate his fury with his neighbors.

Community members of the Raval area dedicated a small garden surrounded by walls colored with street art to represent the injustice of the death of a local business owner, Juan Andrés Benitez, a homosexual man who was allegedly murdered by the hands of policemen. Despite being known for its abundance of homosexuals, Catalan police are known for abusing their power and mistreating gays. After separating a fight between Benitez and another man, El Yazid, Benitez was handcuffed and given five blows to the head. He reportedly died from a heart attack caused by the punches.

The graffiti on the walls that enclose the garden communicates the neighborhood's sentiments towards the gross discrimination and total misuse of power by the policemen who have yet to be punished. The fury that the people have against this injustice is what provoked the graffiti on the not all street art comes in the form of angry messages to the government.

El Pez, or The Fish, is notorious for the smiling fish he paints all over Barcelona. The artist uses the smile on all his paintings because it communicates a universal message to all passersby; be happy!

In an effort to reclaim the celebrated reputation that street art had before the imposition of laws tainted it with a negative stigma, Mapping Barcelona Public Art and On-1st film produced Las Calles , (The Streets Speak)a documentary about graffiti. The movie serves to educate the community on the importance of street art by explaining its history, motivations, and cultural significance to Barcelona.