The Academy Award's Important Stand
Odyssey
CurrentlySwoonLifestyleHealth & WellnessStudent LifeContent InspirationEntertainmentPolitics and ActivismSportsAdulting
About usAdvertiseTermsPrivacyDMCAContact us
® 2023 ODYSSEY
Welcome back
Sign in to comment to your favorite stories, participate in your community and interact with your friends
or
LOG IN WITH FACEBOOK
No account? Create one
Start writing a post
Politics and Activism

And no - I'm not talking about Leo getting up to accept that Oscar. 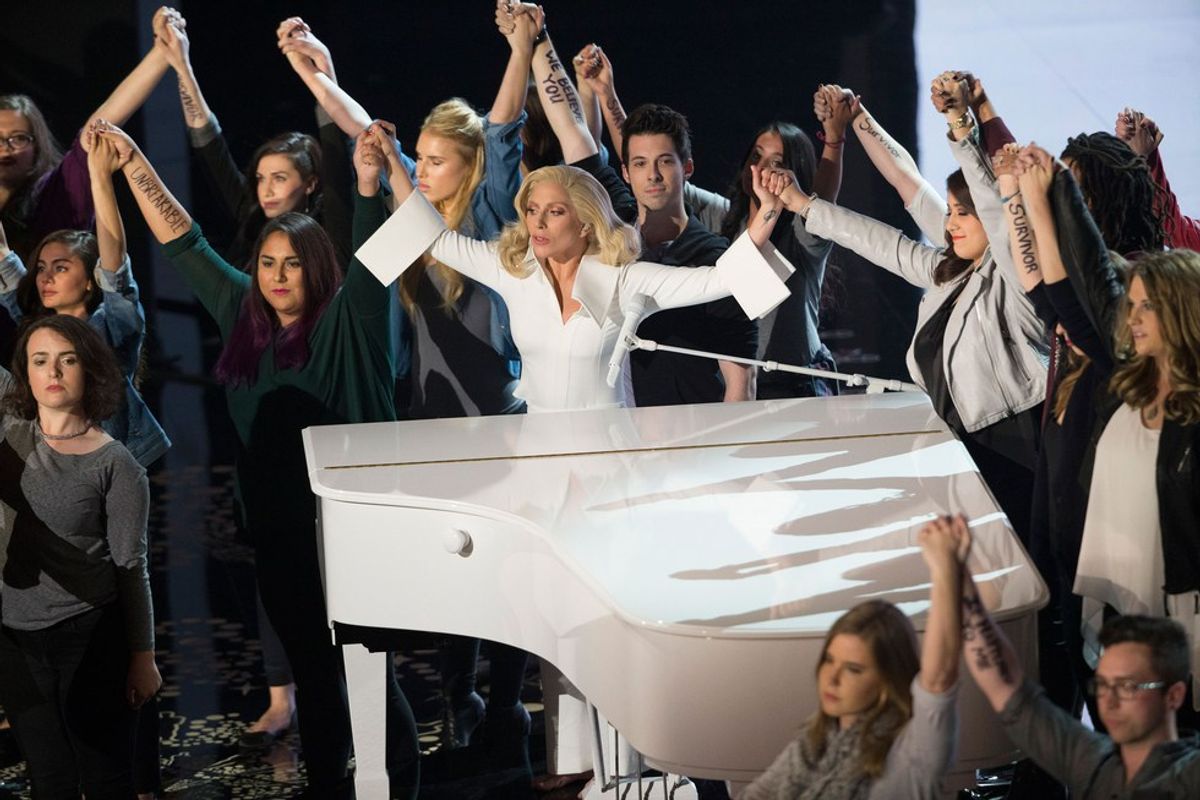 The Academy Awards 2016. A night of glitz, glam, and screaming because he did it, Leo finally did it.

But this year’s show shown the spotlight on something more important than the designer gowns, the comedic opening monologue, and even that little gold statue.

It took a stand and raised awareness for victims of sexual assault – and it’s all thanks to a powerful performance by Lady Gaga of her song "Til It Happens to You."

As a college student, this is something I’ve been hearing about for a while now. How I have to be careful of what I wear, the places I go, what could happen if I walk away from my drink or to my car alone at night. It’s become a social norm to tell people, especially young girls, to protect themselves, rather than tell people to stop giving us reasons to protect ourselves, that no means no.

I don’t want to raise a daughter that has to learn how to hold her keys in between her fingers before she learns how to use those keys to drive. My brother shouldn’t have to worry about his future girlfriend being cat-called as they walk down the street.

Bringing the survivors – both men and women – on stage for the world to see – saying "We are here, we do exist, we are not ashamed of how far we’ve come" – that was brave. Not only that, it was necessary. They have done nothing wrong, and yet victims of sexual assault are constantly seen as the ones to blame due to irrelevant and stereotyping answers like ‘what were you wearing?’ ‘how were you acting?’ or ‘were you sober?’

I understand that this is a night to focus on those in the entertainment field – to celebrate their accomplishments and trust me, I am happy to notice those who work so hard both on and off screen. But by using this night of fame to take a few minutes and focus on a topic that some people try so hard to keep swept under the rug? That was brilliant. That opened doors, minds, and hearts. Empathy, compassion, help and support are coming just by talking about that performance and what it means.

So don’t stop talking about it. Don’t stop sharing the video. Don’t stop the discussion until the issue itself is stopped.

We have work to do, but this is our chance. Lady Gaga and the survivors paved the way, stood on a stage, raised their arms and invited us to join them. And it’s time for us to follow their path so we can help those that have experienced sexual assault and prevent it from happening to anyone else.

For more information on the campaign to end sexual assault and to take the pledge, I encourage you to do so.

Nicole Marie Nigro
Individual Creator
8156
c1.staticflickr.com
Where to start...... Let me start with the cliche that life throws us curveballs and what we do with it is what counts.