Steve, how did you become so amazing? 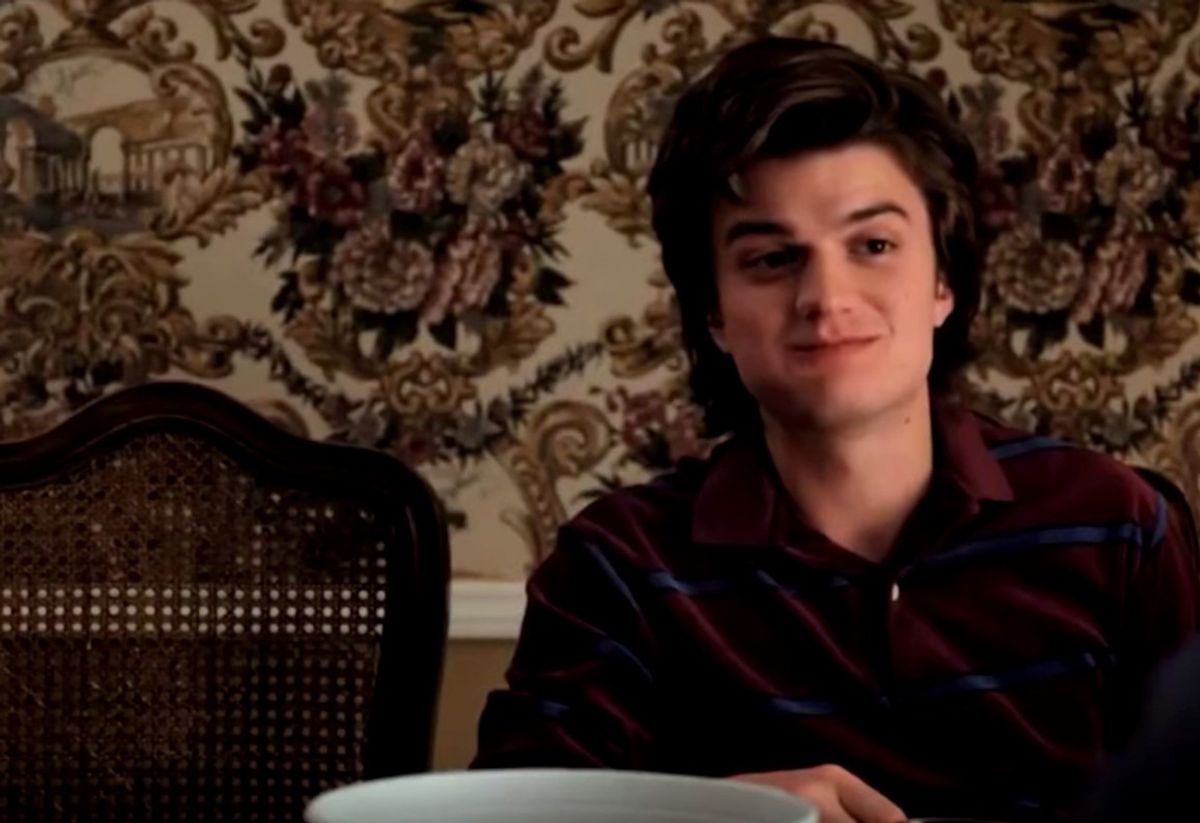 If you haven't seen Stranger Things 2 yet, first of all, HOW CAN YOU ACTUALLY NOT BINGE IT. THAT IS SOME MAJOR SELF CONTROL. Second, if you don't want like ANY spoilers, I would stop reading and go finish it.

To you readers who have finished, all I can say is that this sequel was pretty...

The Duffer Brothers really defied my expectations for this long-anticipated second season. The cinematography is on point. The story is so well written. The development of all the characters was** flawless**.

But we definitely need to talk about the development of just one specific character: the notorious Steve Harrington.

Steve was the cliche all-American smooth player boy that everyone falls in love with in season one. Including Nancy Wheeler.

That face is pretty irresistible, to give her some credit.

The problem is, he's just kind of a terrible person in season one. He broke Johnathan's camera just to "show off" more than actually trying to "get revenge" on Johnathan for taking some pretty creepy photos, and after he found Johnathan sleeping over at Nancy's (even though it was purely platonic and he jumped to conclusions), he let his friends spray paint that terrible message about Nancy on the movie theater marquee. Oh, and he also cared more about getting in trouble with his dad than BARB GOING MISSING. Why ya gotta be part of the herd, Steve?!

But, he did redeem some of his not-so-good actions by the end of the first season. He realized his friends were the worst and went back and helped clean up the graffiti, he ended up buying Johnathan a new camera, and even stayed to fight the Demagorgon, even though all he wanted to do was to win Nancy back.

So here we are in Hawkins, Indiana. A year later. The first time we see Steve, he's struggling to write his college essay and contemplating on just staying in "boring" old Hawkins with Nancy:

Ugh, I missed your pretty face and stuff.

Viewers are just getting a glimpse of the new and improved season 2 Steve, but also having all the pretty boy moves of season 1:

But then we see that Nancy is spiraling because she is blaming herself on Barb's death. Steve is trying to let her know that she is not to blame, but he still gets hit with this drunken truth bomb at the Halloween party:

WHAT THE HECK NANCE. WHY YA GOTTA GO AND BREAK HEARTS?!

But with Nancy out of the picture, his fake friends leaving him in the dirt also, and Billy terrorizing him, he's kind of all alone.

I GUESS SO, BILLY. I GUESS SO.

Luckily, just when Dustin is frantically searching for his party over at the Wheelers (you know since DART IS GIGANTIC AND ATE MEWS), Steve shows up with some flowers to get his beloved Nancy back.

After not finding Dart in Dustin's bomb shelter, they're off trying to lure Dart to them, and we see them having a heart to heart on the train tracks.

He gives Dustin both bad and good girl advice,

And even talks about his hair routine!! (Which includes Farrah Fawcett hairspray. Who would've thought?)

They eventually meet up with the rest of the party, and Steve is already throwing himself into the madness for the saftey of these kids when they're trying to get Dart.

Then he's really put in charge of the kids when everyone rendezvous's at the Byers' house, and he even realized he's not so bad at handling these kids when Nancy tries to apologize to him for LITERALLY BEING TERRIBLE (sorry, I'm still salty.)

After him already lecturing the kids for needing to stay in the house, throwing around a dish towel like any dad would,

Billy decides to show up and literally tries to kill Max and Lucas, but Steve GOES AND DOES THIS

But sadly, he gets his butt kicked by Billy, but in the wise words of Dustin, he put up a good fight.

And after being kidnapped by the kids while still unconscious so they could get to the vines and POTENTIALLY ALL DIE AGAIN, Steve STILL decides to put his life before all of theirs.

Then once the madness is all said and done, he still does his fatherly duties by TAKING DUSTIN TO THE SNOW BALL

There ya have it. Steve Harrington going from a slimeball to the world's best dad in just a couple episodes.

What will happen next in Season 3 for Steve? Well, Duffer Brothers, GIVE ME YOUR WORST (but also let Steve have some friends that are his age please and thank you).