'Shrill' Reminds Us Not Just Skinny Girls  Have Fun

Thank You, 'Shrill,' For Reminding The World I Can Have Just As Much Fun As The Skinny Girls

Hulu has completely changed the game with a show about widening people's horizons on body positivity. Also, THE POOL SCENE! 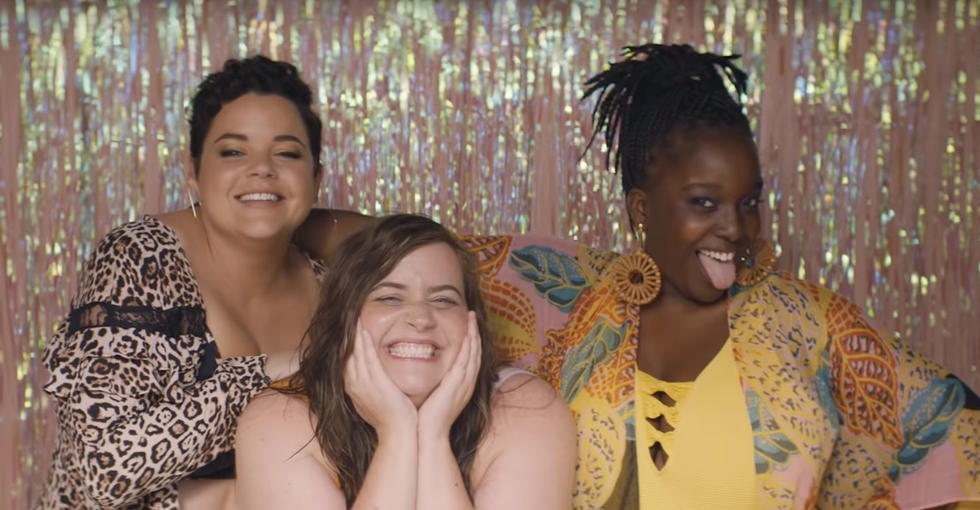 "Shrill" is one of Hulu's newest shows that premiered only a few weeks ago, and it has already generated a ton of buzz from not only the plus size community but the straight size one too. I feel like it is my duty to inform the rest of the world that hasn't seen or heard about this show to go watch it.

Aidy Bryant stars in this comedy/drama as Annie Easton, a fat woman who just wants to be treated like everyone else. She lives with her friend Fran and is trying to navigate in a world that is completely against her existence. She works at a journal that publishes personal articles, which is where Annie gets in trouble for writing about being fat in a world that doesn't want her to exist.

Annie constantly feels like she constantly has to reassure other people that she is worthy of their time and attention. Her love interest in the show, Ryan, is seemingly clueless as to what is actually going on in not only his life but hers too. For someone who gets a lot of screen time, Ryan never gets to where the audience feels like they are going to keep liking him.

What attracted me to this show was my personal connection with its theme. I have never been skinny in my life. You could say I was always on the bigger side, even when I was thinner than I am now. I am one of those people who has always seen themselves as "skinny" or thinner than I actually am.

I just go about my daily life knowing I can easily do anything thinner people can do, including trying on any kind of clothes and going on a ten-mile hike. I have been made fun of more times than I can count and I can remember asking people if they have ever been bullied for what they look like and they never had. It baffled me for years how some people fit the perfect look so that they were invincible from any bullies. My body has been a constant battle with PCOS and stress, seeing a noticeable weight gain after a depressive year and, honestly, I was mad for a long time that it had happened to me so quickly.

This show reminded me of what it was like living in a fat girl's body. Skinny and fat shaming both exist in different ways. Annie in this show gives us the reality of what it's like to have people hate her for not looking like the standard. I have been reminded by men and even some women (which could be taken as even more despicable,) that I am ugly and have done this to myself. I didn't do this to myself and like Annie, I refused to let people assume that I have something wrong with me because my stomach isn't flat and my arms are rounder. Annie didn't let anything stop her from wearing dresses and swimsuits (which we will discuss in a second).

In episode four, Annie decides to attend a plus size pool party with her friend Fran and write an article about it. She has no idea that this party is going to change her perception of fat bodies in swimwear.

Attending the party in jeans and a shirt, she stands out and knows it. The women she meets at the party are some of the nicest people in the show (look for your favorite influencers!). After having these conversations, Annie walks into a dance party. You can see she is obviously uncomfortable at first but she watches other girls just let loose while Ariana Grande plays in the background.

She starts dancing like no one is watching and eventually is able to wear her suit. I cried watching this scene because I want every day to be like this, so wild and so naturally free is a privilege a lot of thinner people have, in the sense that no one is really telling them to stop.

I want to live in this world that accepts everyone and there isn't such a thing as size, just the person. I want a world where the first thing people see is my face, not my size.

I think this show was a long time coming, especially in a world where body positivity is looked at as a great thing but also criticized by many people thinking that it means accepting unhealthy ways. I can do what my thin friends do, wear what they wear, and by my surprise, kept a boyfriend for over four years now. The only difference between me and them is size. We can eat the same things but be affected differently, but we can also acknowledge that we aren't different and that is the journey Annie is going through in "Shrill."

The world is changing and representing more body types and inclusivity is something to look forward to. I hope everyone can appreciate the fact that a show like this exists and hopefully this inspires more shows like it to come.

body positivity
Report this Content
This article has not been reviewed by Odyssey HQ and solely reflects the ideas and opinions of the creator.